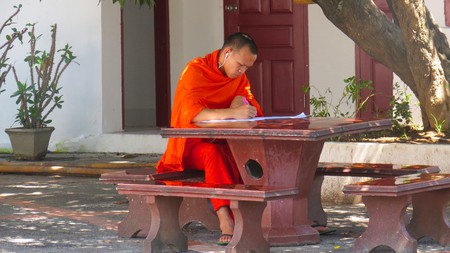 So much of pop culture in Laos from movies to television to pop stars is dominated by Thai superstars. Laos, however, has its own brand of icons creating original music and singing in Lao and English for audiences all over the world. Check out these 10 Lao pop musicians.

Taiy Akard is a Lao pop artist and guitar player with Indee Records. His hits include Teng, Release ປົດປ່ອຍ, Until the Last Day ຈົນ​ກ່​ວາ​ວັນ​ສຸດ​ທ້າຍ and To Dream.

Sam Intharaphithak is a Lao R&B singer/song writer based in Vientiane with Indee Records. He wrote and performed the theme song of the 2009 Southeast Asian Games, “The Spirit of the Flame.”

Alexandra Bounxouei is a Lao pop singer. “The Sun Will Shine Again” is a collaboration with Sam Intharaphithak for the United Nations Development Programme in Laos to support victims of unexploded ordinances.

CELLs is the number 1 band in Laos. They are a six-member Lao rock band that has gained popularity in Thailand as well. They have released music on a Thai music label. Their music has also been featured on movie soundtracks.

Kataiy is a solo pop artist and heartthrob. He sings mainly about love, relationships and heartache. His ballads are heartfelt and set to guitar and a heavy dose of high hat.

Ketsana Vilaylack is a Lao pop artist born in Savannakhet who has 10 albums under her belt. She is named after a rare Lao tree used to make scented perfumes. She produces experimental pop world music and is currently based out of Nashville.

Sang Luangrath, AKA, Supasang, is a Lao rapper based in the U.S. Born in Vientiane, he moved to Orange County when he was eight and began rapping at age 13. He has several mix tapes, an album and a documentary film about him called Supasang: In The Making.