A Guide to Temple Etiquette in Laos 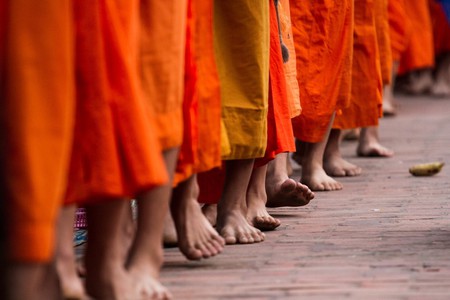 Temples are ubiquitous in Laos and the vast majority of them are active religious institutions with a monastery that plays home to the many monks, novices and nuns who have devoted themselves to living a pious life.

Lao people adopted Theravada Buddhism between 300 and 200 B.C.E. Lao people observe a mixture of Buddhist and animist traditions with around 60% of the population self-identifying as Buddhist.

Visiting a temple or Wat in Laos can be a beautiful, serene experience, but there are expectations that visitors behave with decorum and respect. The easy going “bo pen nyang” nature of the Lao makes it unlikely someone will tell you directly when you’re acting inappropriately. Follow this guide to temple etiquette to ensure a great visit.

Would you wear it to church? Then it probably passes muster for a temple visit. Lao women visiting a temple will wear an ankle-length sinh and a long sleeve blouse. While you don’t have to take it to extremes, you do need to cover up. Women should be covered to the knees with capris or a long skirt and the shoulders and chest should be fully covered. Bring a shawl in your bag to have with you in the pinch. The Lao are modest people, don’t give them a reason to be embarrassed by you or for you. Men should wear long pants or shorts at least to the knee and have at minimum a t-shirt on; a button up is better, but absolutely no tank tops.

Many temples are free to enter for visitors or the faithful, but some of the more popular ones may ask for a modest entrance fee. Pay it. This is Laos, so you’re unlikely to see a turnstile or any strict gate-keeping. It’s possible the person selling tickets is asleep or on their phone, but show your respect by making a good faith effort to pay. The same goes for restroom fees. Lao people are non-confrontational, but these small amounts add up and is how the temple stays open and the restrooms get cleaned.

It’s fine to walk around the temple grounds in your sneakers, but if you enter a building, leave your shoes outside. Sometimes there’s a dedicated shelf or location for this, other times you can leave them on the steps leading up to the sanctuary. Remove your hat as well. When walking inside, move in a clockwise manner and don’t step between someone and the Buddha at which they’re praying. 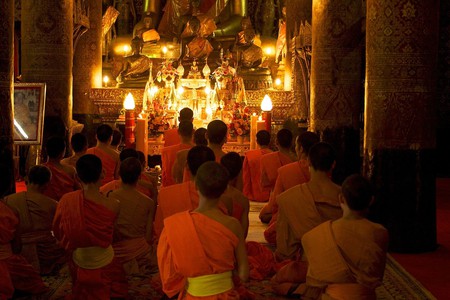 Turn Your Feet Away from the Buddha

In Laos your head is high and your feet are low. As the lowest part of the body, you should be careful not to point your feet at anyone, but especially not at the Buddha. If you are uncomfortable sitting in a kneeling position, you can drop your hips to one side with your knees bent and your feet behind you. If this is also too much to bear, sitting cross legged can be acceptable for westerners if you’re careful about the direction your bare soles are pointing (down to the floor, tucked under you and away from the alter is best.)

Save your snack for once you leave the temple grounds. Monks don’t eat past noon. Most monks in city temples eat two meals per day, one very early in the morning and one around 11 a.m. All of the food monks eat are offered in donations as Buddhist scripture forbids the growing, storing, cooking or picking of food by monks.

Talk With the Monks

Many of the Monks (Kubah) and novices who live in monasteries are studying English and are happy to speak with you. Novices are boys who are studying the sutras and may become ordained in time, or may be temporarily dedicated to the monastic order to earn merit for themselves and their family. Offer them a high nop (palms pressed together thumbs to the forehead) for respect. The nop will not likely be returned by the monk since it’s a symbol to show respect from a lower social class to a higher person. Women especially should keep a respectful distance from monks when interacting. Women may not touch monks or their robes. They also may not hand anything to the monk directly, with the exception of placing alms the the Monk’s bowl during morning alms rounds. Wat Sokpaluang in Vientiane has a “Monk Talk” and meditation session Saturday afternoons. 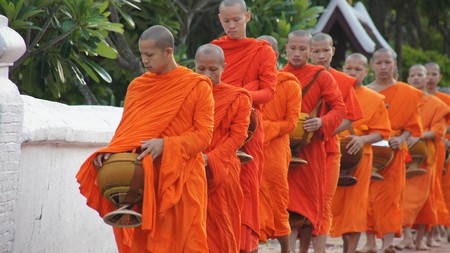 Taking photos of the outsides of buildings in a temple complex is fine. Remember that while you may consider it a tourist attraction, a temple is a place of worship. Monks aren’t zoo animals and vying to get the best shot is uncomfortable for them and any lay Buddhists in the temple coming to pray or pay respects. Some temples have a no-camera policy for the inside of sanctuaries. For those that don’t, use your best judgement. It’s not polite to take photos of people praying without their permission.

Pray or Give Offerings

The streets outside many temples are lined with stalls selling incense, candles and intricately folded palm leaf and marigold offerings. It’s fine, and encouraged even to buy these items and make an offering at an alter or in front of a Buddha effigy. If you take a candle or light incense from the temple, make a monetary donation as well. Temples run on donations. When you set the offering down, kneel with your feet to one side away from the Buddha and offer three of your highest nops: one for your commitment to virtue, one for the realization of truth and a third for the monastic order. Bring your palms together, thumbs to your third eye and bow down to the ground. When in doubt, glance around and follow suit.