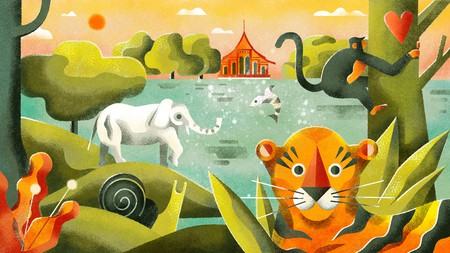 Lao folk tales and legends reflect the majority Buddhist culture and are told with humor and mixed reverence for the current communist state. Some stories have origins in the Panchatantra Sanskrit stories from India, which are also the basis for many of Aesop’s fables. Others are Jataka stories that tell of the past lives of Buddha. Check out the summaries of these great fables!

Kham was a very lazy novice monk who slept all day instead of doing his chores. The abbot assigned Kham to sweep all the chicken poop up from the temple ground. Kham began but put the broom down as soon as the abbot was out of sight. That evening, the abbot found Kham sleeping, called him lazy and said that if the next day there was even one piece still on the ground he would make Kham eat it. The next day Kham heated palm sugar over the fire until the burnt pieces resembled chicken poop. He strategically scattered the sugar pieces and went back to sleep. When the abbot found him, he was furious and told Kham he would teach him a lesson and make him eat the poop. Kham ate a pice of sugar and told the abbot how delicious it was, and then he ate another. The curious abbot tried a piece, agreed it was sweet and told Kham to sweep all the poop and put it on a plate for him to eat. Kham swept the whole yard, placed it on a plate and to his delight the abbot spit out the first bite in disgust. “What did you expect?” asked Kham. “You are eating chicken poop.”

The Crocodiles and Monkey Hearts

Xieng Mieng, the trickster formerly know as novice Kham, was enlisted by the king to carry his majesty’s betel nuts to the horse race on foot while the king road his white horse. The king waited at the track and watched the races but wanted to chew his betel nut. Xieng Mieng walked very slowly, smelled the flowers, took a nap and arrived at the ninth and final race. The king asked where he had been. Xieng Mieng said he had been told to follow but not how fast. The next week the king told Xieng Mieng to follow him to the race as quickly as possible. Xieng Mieng ran to the race and, on his way, the betel nuts fell out of his bag. The king was angry when Xieng Mieng arrived and asked why he didn’t pick up the betel nuts. Xieng Mieng said he would have been late had he picked up the dropped nuts. The next week the king informed Xieng Mieng to follow him as quickly as possible and to pick up everything that drops. Xieng Mieng followed the king and put all of the manure that dropped from king’s horse into the bag with the betel nuts. When the king reached his hand into the back at the race track and pulled out a handful of manure, Xieng Mieng told the king he had followed his words exactly.

A large drought caused the pond where turtle lived to dry up. His two swan friends told him of another pond 10 minutes away as the crow flies. Turtle told them that it would take him five months to walk that far. The swans hatched a plan to carry the turtle between them but warned turtle he must not open his mouth. Turtle would bite a branch with his strong jaw and the swans would hold the ends of the branch in their feet as they flew. Turtle had never flown before and was enjoying the ride when a boy and girl started arguing about whether the swans were carrying the turtle or the turtle was carrying the swans in the sky. The girl thought the turtle was carrying the swan and the turtle began to believe that he could actually fly. The turtle opened his mouth to shout to the children and fell down, down, down to the ground and exploded. The turtle juice sprayed all over the boy’s underarm which had been pointing to the sky. No matter how much he washed he couldn’t escape the smell of the turtle and that’s why men’s armpits stink.

A funny postscript to this: In Lao, the word for body odor is kee tao, or turtle s***.

Xieng Nyan ran a joke shop where he sold squirting flowers, inky eye glasses and trick soap. His customers always said he was tricky, but that the trickiest and most clever man in the kingdom was Xieng Mieng. Xieng Nyan had never met Xieng Mieng but set out to meet him and trick him. Xieng Nyan decided to fart in a bamboo tube and deliver it to Xieng Mieng. When he arrived in Xieng Mieng’s village, a man invited him for coffee. Xieng Nyan explained that he was looking for Xieng Mieng and that he planned to trick him into smelling his fart. The man commented that he must have farted in the tube a long time ago and asked him if he was sure the fart still smelled. Xieng Nyan agreed that it had been all morning that the fart had been in the tube. The man encouraged Xieng Nyan to check to see if the fart still smelled. Xieng Nyan opened the bamboo tube, took one whiff and indeed, the fart smelled terrible. The man then revealed himself to be Xieng Mieng and he had tricked Xieng Nyan to smell his own fart.

Lion was not happy because he didn’t have any friends to play with. All of the other animals were afraid of being eaten by Lion. One day Lion decreed that, each day, the animals would vote on which one of them were to be his lunch, and the chosen animal would have to play as Lion’s friend in the morning. When it was the rabbit’s turn to be eaten, he told the lion that he saw a different lion at the watering hole that wanted to eat him. The rabbit told the other lion that he could not because he was already Lion’s lunch. Lion was not happy to have his turf invaded and demanded that rabbit take him to see this other lion. Rabbit took him to the cliff above the watering hole. Lion saw another lion in the pond. He roared at the other lion but the other lion made no sound. Lion did not like being mocked and jumped from the cliff toward the other lion. The pond was full of sharp rocks and Lion died. Rabbit became a hero among the animals, none of whom had to become lunch.

Rabbit was sitting by a pond one day when he saw Snail leaving a slimy trail behind him. Rabbit commented to Snail that he was slow and walked funny. Snail told him he liked taking his time to smell the flowers and make figure eights but that if Rabbit wanted to race him around the pond, he would surly loose to Snail. Rabbit agreed. That night, Snail and all of his friends hatched a clever plan.

Snail and Rabbit started the race by the pond the next day. The first one to come back to the starting point would be the winner. Rabbit bounded away and looked behind him but saw no snail. “Where are you Snail?” he called. Snail replied from in front of Rabbit that he’d see him at the finish line. Rabbit could not believe it. Rabbit rounded the pond and again saw snail in front of him! Rabbit got to the finish line but Snail was already waiting for him. Rabbit hung his head in shame and went home. Snail waited for his other snail friends to slowly finish the course and meet him at the finish line, where he had been waiting the whole time.

The Bird That Spoke 5 Languages

Xieng Nyan wanted to beat his nemesis Xieng Mieng. He bought a sacred mynah bird at the market that could speak five languages and challenged him to a talking bird contest where the owner of the bird who could speak the most languages and speak the most sweetly would win. Xieng Mieng didn’t have a talking bird but bought a vulture and fed the vulture only mynah birds in the week leading up to the contest. Xieng Nyan’s talking mynah bird spoke English, Vietnamese, French, Chinese and Lao to the crowds on the day of the contest. The spectators were amazed, even though they could only understand Lao. When Xieng Mieng unveiled his vulture, he immediately ate Xieng Nyan’s talking mynah bird. Xieng Mieng said that the vulture understood all five languages and was offended by the obscene language of the mynah bird. The contest was declared a tie and Xieng Nyan was foiled again.

After failing to catch a young, quick deer for dinner, the old tiger, king of the jungle, called a meeting of all the animals to announce his retirement. He informed his subjects that he would be meditating in his cave for the rest of his days but that if they had any disagreements they could visit him for advice and justice. One day a rabbit left his cozy hole to get some lunch. When he returned, a partridge had taken up residence there and declared finders keepers. They approached the tiger with their quarrel. The tiger decreed the rabbit in the right and ate the partridge. He asked the rabbit to shake his hand in congratulations, and when the rabbit reached out his paw, the tiger grabbed him and ate him too.