11 Awesome Native Animals You Must See in Laos 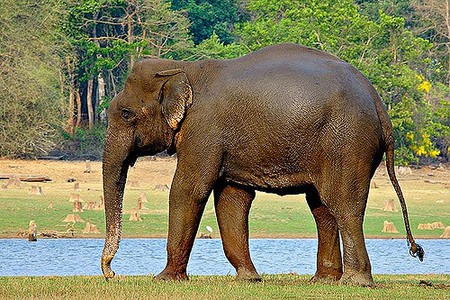 Laos used to be known as the Kingdom of a Million Elephants and the White Parasol. One of the only Asian countries with a sizable wild population of these majestic beasts, Laos also boasts a variety of spectacular wild species, some endangered and some found only in Laos. Here’s what to look out for.

The endangered Irrawaddy dolphin (Orcaella brevirostris) lives in the Mekong River on the Lao and Cambodian border. Only 75-85 of these freshwater river mammals are alive in the wild today. They have bulbous heads and small dorsal fins and can be seen from boats for hire in Don Khon. Considered sacred reincarnations of the deceased by the Lao people, these beasts are never intentionally fished or trapped. However, certain fishing techniques like gill netting have been detrimental to their population.

They don't jump out of the water like in all the photos, but nonetheless, experiencing the extremely endangered Irrawaddy dolphins in the flesh was breathtaking. The dolphins reside in Kampi, about a 30 minute drive along the Mekong River from Kratie. Their distinctly bulbous-shaped heads were a treat to see 🐬🐬⠀ .⠀ .⠀ Trip through Cambodia's Wild East organised by @maads.asia⠀

The elusive and endangered Black Crested Gibbon (Nomascus concolor) can be seen in the northern province of Bokeo through The Gibbon Experience. The males are black and the females are golden. These primates are monogamous and live in family groups. They are the world’s fastest ape and sing loudly at dawn. Their long limbs aid them in their arboreal lives high in the trees. A related species, the yellow-cheeked crested Gibbon (Nomascus gabriellae) can be spotted and heard in southern Laos. They have long, complex mating calls and can live to be over 50 years old in the wild.

Fewer than 100 Indochinese tigers (Panthera tigris corbetti) remain in the wild in Laos today, down from hundreds of thousands. Habitat loss in addition to the fact that they have been hunted for their pelts and bones means this species is nearly extinct. While trekking, keep an eye out for scratch marks on trees and scat on the ground to know if one of these big cats is nearby. Nam Et-Phou Louey National Protected Area is home to wild tigers and offers a variety of eco-tourism options, from 1 to 5-day safaris, trekking and boat rides. Proceeds go to local villagers and tiger conservation efforts in the park.

Indochinese tiger (Panthera tigris corbetti) is a tiger subspecies occurring in Myanmar, Thailand, Lao PDR, Viet Nam, Cambodia and southwestern China. It is listed as Endangered on the IUCN Red List, as the population seriously declined in recent years and approaches the threshold for Critically Endangered, with 342 individuals estimated as per 2011.The largest population unit survives in Thailand estimated at 189 to 252 individuals. There are 85 individuals in Myanmar and only 20 Indochinese tigers remain in Viet Nam. It is considered extinct in Cambodia. 8.4 to 9.4 ft and in weight from 150 to 195 kg. Indochinese tigers live in forests, grasslands, mountains and hills. They prefer mostly forested habitats such as tropical rainforests, evergreen forests, deciduous forests, tropical and subtropical dry broadleaf forests. Forests provide camouflage, and hunting grounds that fit their lifestyle and dietary needs. prey mainly on medium- and large-sized wild ungulates. Sambar deer, wild pigs, serow, and large bovids such as banteng and juvenile gaur comprise the majority of Indochinese tiger’s diet. primary threat to Indochinese tigers is mankind. Humans hunt Indochinese tigers to make use of their body parts for adornments and various Eastern traditional medicines. Indochinese tigers are also facing habitat loss. Humans are encroaching upon their natural habitats, developing, fragmenting, and destroying the land. In Taiwan, a pair of tiger eyes, which are believed to fight epilepsy and malaria, can sell for as much as $170. In Seoul, powdered tiger humerus bone, which is believed to treat ulcers, rheumatism, and typhoid, sells for $1,450 per pound. #indochinesetiger #tiger #bigcat #feline #animals #savetheanimalssavetheworld #endangerd #conservastion #easternmedicine #china #vietnam #laos

Asian elephants are smaller than their African counterparts, but just as mighty. Check out the Lao Elephant Festival in Sainyabuli, where every February processions and demonstrations highlight the need to preserve elephants’ habitat and prevent deforestation. Or, head to the Pung Xai observation tower in Ban Na near Vientiane, to try your luck at spotting a heard in the wild.

If you encounter an elephant-riding attraction, think before you ride: elephants are often mistreated, isolated and overworked. Consider visiting The Elephant Village Sanctuary in Luang Prabang, which rescues and cares for elephants that formerly worked in the logging industry.

With a distinctive white crest on the chest, these shy black mammals live in southeastern Laos and throughout Asia. Related to the north American black bear, the Asiatic black bear or moon bear, is facing extinction due to habitat loss and being hunted for its body parts. The bears’ gall bladders are frequently used in traditional medicine. They are excellent climbers and feed mostly on fruits and small animals.

The Laos Wildlife Rescue Center in Vientiane Province cares for approximately 20 bears and offers short and long-term volunteer projects for travelers who want to get up close and personal with these beasts.

This magnificent creature is the Asiatic Black Bear, one of the many animals suffering from the abuse caused by the Traditional Medicine trade in Southeast Asia. For more information on these beautiful animals, check out today's episode of 5 Weird Animal Facts! Only on AnimalBytesTV. #asiaticblackbear #traditionalmedicine #endangered #5weirdanimalfacts #animalbytestv

The pygmy slow loris (Nycticebus pygmaeus) is a nocturnal prosimian. With big eyes and fluffy coats, they live in the forests of Laos but are captured and traded illegally to be sold as pets. A demand for tourist photos with these cute animals further reduces their numbers in the wild. Many lorises in captivity have had their teeth filed and are made to stay awake during the day. Deforestation is another threat to these endangered mammals. They are omnivores and have sharp needle-like teeth. When they are threatened, they produce a poison in the brachial gland in their elbow. They then rub the secretion onto their heads and teeth before biting.

Also called the honey bear, the sun bear (Helarctos malayanus) is the world’s smallest species of bear. They weigh 60-170 pounds (27–80 kg) and are 47-59 inches long (120–150 cm.) Sun bears have a yellow patch on their faces and chests and, like the Asiatic black bear, are hunted for their gall bladders, bile and other parts for use in traditional medicine. Some bears are kept alive in tiny cages to have their bile extracted because it is falsely believed that bear bile aids male virility.

The Laos Bear Sanctuary near Luang Prabang at Kouang Si waterfall is dedicated to rehabilitating bears and informing tourists about Sun Bears and Moon Bears in Laos.

The vulnerable clouded leopard (Neofelis nebulosa) is named after the distinctive pattern on its coat. They live in the forests of Laos, have short legs and can climb trees and move quickly through dense foliage. Clouded leopards are threatened by poaching and habitat destruction but live in the wild in the Nam Et-Phou Louey National Protected Area in northeastern Laos. The medium-sized cats are 24 to 43 inches long (60 to 110 cm) and weigh between 24 and 44 pounds (11 and 20kg.) They use their long, ringed tails for balancing

my spirit animal 🐾 what animal or other living entity do you identify with the most and/or have a strong connection to? whether it's a mammoth, timber wolf, a tree frog, a great oak or a venus fly trap, i'd love to know what & why! 🖤 #spiritanimal #cloudedleopard #mysterious #kitty

Wild water buffalo (Bubalus arnee) are endangered, with their numbers dipping below 4,000 worldwide. They are the ancestors of domesticated water buffalo (Bubalus bubalis) and used for milk, meat and to pull plows on farms throughout Laos. The wild water buffalo are larger and bulkier than their domestic counterparts, and both males and females have large horns spanning up to 79 inches (2 m.) By some accounts, there are no true wild water buffalo left in Laos, and those that roam the countryside are actually feral herds of the domesticated breed. They can often be seen lying in ponds or mud puddles to beat the heat and keep the mosquitoes at bay.

The spindlehorn (Pseudoryx nghetinhensis) is a critically endangered forest-dwelling bovine. Related to antelopes, they are one of the rarest species and only live in the Annamite mountains of Laos and Vietnam. Also called the saola, they were only discovered as a species in 1992. Confirmed sightings have been reported in the Nakai-Nam Theun National Biodiversity Conservation Area in central Laos. Both males and females of the species have horns. Nicknamed “the polite animal” in Lao, these creatures stealthily move through the forest.

The #Saola (Pseudoryx nghetinhensis), also called the#VuQuangOx, #Spindlehorn, #VuQuangBovid, #AsianBicorn, and #AsianUnicorn, is one of the rarest mammals on the planet, found only in the Annamite Range of Vietnam and Laos. This creature is closely related to cattle, goats, and antelopes. Although it has been kept in captivity a handful of times, it doesn't usually do well and can only last short periods. The first picture ever taken of the Saola was via a camera trap set by the Vietnamese Forest Protection Department in 1999. It is listed as Critically Endangered and is often considered one of the top ten most endangered species in the world. Habitat destruction and encroachment have drastically reduced the Saola's population, as well as traps set by farmers intended for pests. More than 26,500 snares have been removed from the Saola's habitat by conservation groups. The Saola Working Group was formed by the IUCN Species Survival Commission's Asian Wild Cattle Specialist Group in 2006 to protect the Saola and its habitat. This foundation has helped the Saola population in countless ways since its formation.

The world’s tallest flying bird, the sarus crane (Grus antigone sharpii ) can reach heights of over 6 ft (2 m). You can’t miss these light grey birds with red skin on their heads and necks. Their wingspan is massive, at over 8 ft (2.4 m.) They live in marshes, eating roots, insects and crustaceans, and form long lasting pair-bonds. This species can be seen in the Bolaven Plateau in Attapeu Province in southeastern Laos. There are fewer than 1000 of the birds left in the wild. The population is vulnerable due to breeding ground destruction, the collection of eggs and sale of the birds for meat.

Early morning flight of cranes over Yungaburra. There is a lot of honking when they fly over and they all seem determined to get to where they going to. #athertontablelands #fnq #cranes #birds #yungaburrabookshop #yungaburra #flyingbirds #sauruscranes