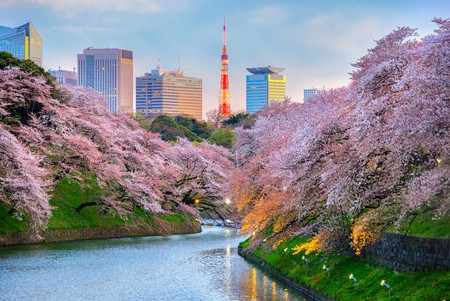 Mieko Kawakami is emerging as one of Japan’s most prominent young literary voices, with thoughtfulness and eccentricity at the heart of her prose.

When I think of contemporary Japanese literature, my mind immediately pans to the red and white Vintage book covers of Haruki Murakami that you see spread out like a deck of cards on display tables in most book stores these days. The covers themselves are distinctly Japanese – mimicking the national flag with its colours reversed – as if to say ‘this and this alone is Japanese literature’.

Murakami, who many critics had as their favourite to win the Nobel Prize for Literature this year, is indisputably Japan’s most celebrated writer in the West. Kafka on the Shore, Norwegian Wood and What I Talk About When I Talk About Running among other works have won notable awards, been adapted into films and littered bestseller lists in the UK and the US. I think Murakami is an enjoyable writer to read – his surrealist prose is as much a felt experience as it is an exercise of the imagination – but the Western tendency to equate his name with Japanese literature is problematic.

Enter Mieko Kawakami. In 2007, the young writer shot onto the scene winning the Tsubouchi Shoyo Prize for Young Emerging Writers for her work My Ego Ratio, My Teeth, and the World and in 2008, the historic Akutagawa Prize for her follow-up novella Breasts and Eggs. In an article published earlier this year, Murakami himself lauded the young writer for her narrative control and stylistic variation. In the same article, he arguably passed on the literary baton to Kawakami in this lyrical tribute to her inevitable rise: ‘Like a tree can be counted on to grow tall, reaching for the sky, like a river can be counted on to flow towards the sea, Mieko Kawakami is always ceaselessly growing and evolving.’ 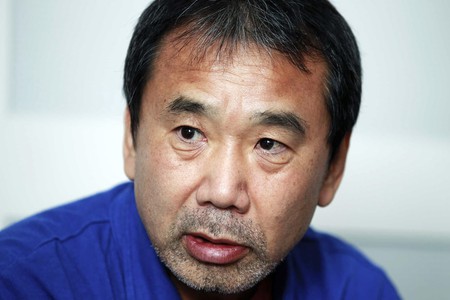 ‘Ceaselessly growing and evolving’ is exactly what makes Kawakami so exciting and pertinent. In her concise collection of works, she has already displayed a remarkable versatility both in narrative form and genre: her first full-length novel Heaven is a Nietzschean exploration of morality through a story about middle-school bullying; her collection of poems Water Vessel (which won the Takami Jun Prize) are ambitious experiments in theme, language and thought; her third novel Longing is an invigorating take on childhood with alternating male and female narrators; her short story About Her and the Memories that Belong to Her harks back to Proust, as a moment at a party provokes an intense recollection of an erotic encounter with another girl from her teenage years.

Her most recent work to be released in English is a touching novella entitled Ms Ice Sandwich (Pushkin Press), translated by Louise Heal Kawai, which comprises a section of her full-length novel Longing. The story is told from the perspective of a nameless young boy, who is desperately but silently in love with a girl. The girl works behind the deli serving sandwiches and has ‘electric blue’ eyelids, ‘the same colour as those hard ice lollies that have been sitting in our freezer since last summer.’

Our narrator is frank – echoing a kind of modern-day Candide – and his laboriously logical perspective on the world paints a surprisingly colourful and insightful picture of his life, as we leaf through this short and poignant novella. Our protagonist’s blunt and candid tone in no way cheapens the depth of his emotional exploration. Akin to how Antoine de Saint-Exupéry’s Little Prince explored life and death through the eyes of a child, Ms Ice Sandwich interrogates what it means to love and lose from a developing and deeply curious narrator.

We soon learn that life isn’t so simple for the smitten boy: he lost his father very young, and he suspects his grandma will soon follow suit: ‘I think maybe Grandma’s going to die soon, and then she won’t be here any more.’ Meanwhile his mother-cum-soothsayer-cum-phone addict is too wrapped up in her own world to take care of her son, revealed in one of the most heartrending passages of the book:

‘I wonder if when I wake up will I be on my futon, and how nice it will be if I am. I remember a long time ago, maybe before I could have any memories… someone like my dad, when I was half-asleep, picking me up and rocking me and laying me down on my soft futon, and it feels like a real memory that comes back to me at times like this, and maybe tomorrow morning I will find myself tucked up in my futon. I know it’s not going to happen, still I think about it…’ 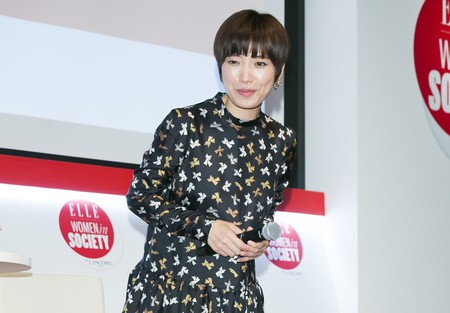 Mandatory Credit: Photo by Aflo/REX/Shutterstock (4848150z) Mieko Kawakami Olivia Palermo at the 'ELLE Women in Society' event, Tokyo, Japan - 13 Jun 2015 The event promotes the working women's roll in Japanese society with various seminars where top businesswomen, musicians, writers and other international celebrities speak about the working women's roll in the world. By 2020 Prime Minister Shinzo Abe's administration aims to increase the percentage of women in leadership positions to 30% in Japan.

Literature about childhood is notoriously difficult to master, as most writers fall into the trap of retelling past events with the luxurious insight of the present, something Kawakami avoids beautifully. Reminders of the narrator’s immaturity are gently weaved into Kawakami’s prose: the boy describes Ms Ice Sandwich’s eyes as ‘the coolest thing’; long, muddled sentences with an abundance of ‘ands’ and ‘becauses’ occur throughout; he mentions how his mother uses ‘a little bit of Grandma’s money and something called her pension, I think.’ It’s the uncertainty of the world coalescing with the certainty of his feelings that gives our narrator such an immediate, youthful realism.

Our narrator may be naive to the ins and outs of pensions, but he is no stranger to his own visceral emotions, and we feel the force of his desire for Ms Ice Sandwich, his yearning to be both visible and invisible, to see her always and never again:

‘I concentrate on Ms Ice Sandwich and I don’t ever want my turn to come. I hardly blink. Then when she finally takes my money and gives me the change and her eyelids turn upwards and I can see those great big eyes again, without any warning that squishy, yellowy, orangey stuff inside my head becomes extra bright, then that hollow place right under my chin, above my collarbone, feels like it’s being squeezed really tightly. And that lump begins to move from my throat and travel slowly, slowly all the way downwards, until it ends up in a bigger place, a kind of open, roomy space – a place soft like a rabbit’s ear.’

As a reader we can’t help but give ourselves over to those familiar fireworks of falling uncontrollably in love while the unfamiliar images of ‘orangey stuff’ and a ‘rabbit’s ear’ keep the unique, subjective experience of the narrator at the forefront: it’s a universal experience but it’s intrinsically his, and we are simultaneously invited in and locked out with exquisite politeness.

Carefully inserted moments in the book, help us to construct an idea of Japanese society, outside the universe of our reliably unreliable narrator. He refers to the ’emergency evacuation training for when in case there’s an earthquake or something’ and the strict decorum that his mother enforces. She reproaches him for speaking out of turn, adding ‘You cannot say things like that out loud… It’s rude.’ What the boy said was in fact, ‘Look at her eyes!’ referring to his deli counter crush – his source being wonder, amazement, desire, lust. Not rudeness. Yet again, what the mother fails to notice, we identify and as such, act as a safe repository for the narrator’s emotional overspill. 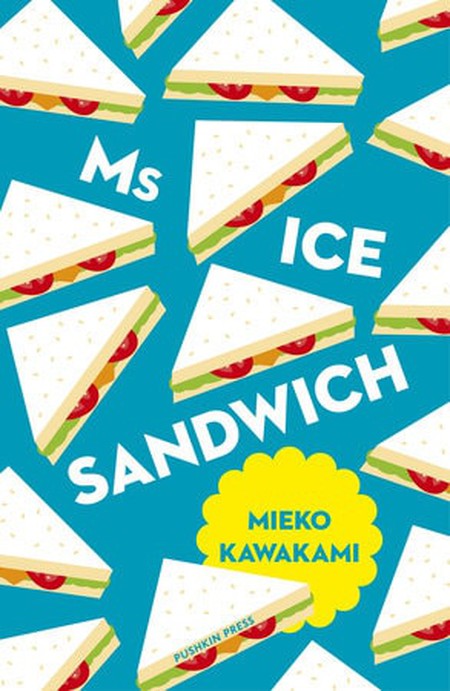 The reproach also kicks up dust that the book in general looks to conceal. There is an unresolved sub-plot to the book, centred around Ms Ice Sandwich’s face and references to physical disfigurement and corrective surgery. One day at school, the narrator overhears someone saying, ‘Her nose is kind of messed up as well. When you end up looking like that – well, there’s no way she’s ever going to get married, no way she’s ever going to be able to do anything. It’s like her life’s over. She’s a freak.’ The boy doesn’t understand. He is confused, angry, full of questions. He no longer goes to see Ms Ice Sandwich at the deli.

The narrator’s best friend at school is called Tutti. A larger than life girl who lives to reenact robbery scenes from Al Pacino movies and ultimately, the girl who teaches the narrator his most important lesson. In the apotheosis of the book, Tutti – herself romantically interested in the boy it seems – delivers a sermon of such maturity, she momentarily becomes the maternal figure that the boy so desperately longs for:

‘You haven’t gone to see her, not for ages. And if it goes on like that forever, then you’ll never see her again… Because that’s what’s going to happen. When you say see you tomorrow to someone, it’s because you’re going to keep seeing them. It’s like at school you see everybody because they go to school every day. But when you graduate and you don’t go to school any more, it stops and you don’t see everybody any more. If you want to see somebody, you have to make plans to meet, or even make plans to make plans, and next thing you end up not seeing them any more. That’s what’s going to happen. If you don’t see somebody, you end up never seeing them. And then there’s going to be nothing left of them at all.’

On one narrative plane Tutti is saving the day, steering our hero back on his eager path to love. While on another, Kawakami provides a deeply poignant commentary on the science of relationships; their elasticity, their necessity and ultimately their transience. As adult readers, we can’t help but sit up straight, pull up our socks and listen to what Tutti has to say.

The final few pages of the novella describe a dream in which the narrator shouts out ‘Goodbye, Ms Ice Sandwich! Goodbye, Ms Ice Sandwich,’ and later, ‘The stars are setting, and in their last breath somebody tells me goodbye.’ A reflexive goodbye to the reader, Kawakami releases us from the confidence of the narrator as quickly as we were granted entry. But there will be more. We will meet Mieko Kawakami – in many different forms – again.