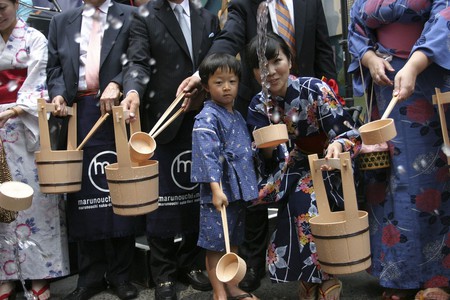 There’s really no question these days – our summers are getting far hotter, and it’s a heat that really can’t be better felt than here in Tokyo during what’s now considered one of Japan’s most brutal years yet.

Between just late April and early August alone, this year has seen a staggering 71,000 people be rushed to hospital from across the nation, with 138 dying of heat-related illnesses, as has been reported by the nation’s Fire and Disaster Management Agency. This number is a massive jump from the country’s previous high of just over 58,000, which was recorded between June and September of 2013.

The impact of this unprecedented heatwave this year, however, isn’t really helped by the fact that a large portion of the nation’s population are based in Japan’s sprawling cities of Osaka, Yokohama, Kyoto, and Tokyo. These urban centres are particularly dangerous during the warmer months, as roads and large concrete structures, like the office buildings that make up the cities’ landscapes, are heat magnets sucking up and retaining far more heat than country’s soil and vegetation rich landscapes. 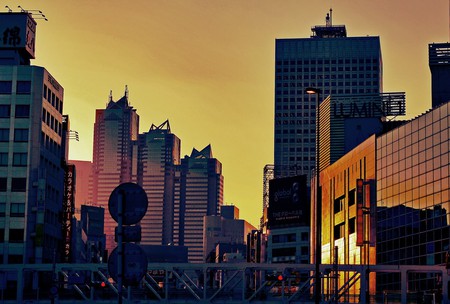 One of the unique ways Japan’s city dwellers combat the heat is through a common technique used since the Edo era (1603-1868) known as uchimizu, which is basically just pouring water on the concrete in an effort to cool it down. ‘Uchi’ means to strike, while ‘mizu’ means water, so, to strike the streets with water.

It sounds deceptively easy, and dare say almost counterproductive (doesn’t the water just dry up?), but in reality it’s an effective and simple way to keep the streets cool during the unbearable heat.

In the most basic scientific terms, the way uchimizu works to cool down the streets is by water evaporation; this evaporation lowers the air temperature around the area. As water vaporises, it takes some of the heat away from the surface from which it’s departing – kind of similar to how sweat works, or why once you jump out of the shower you may start to feel a little chill. 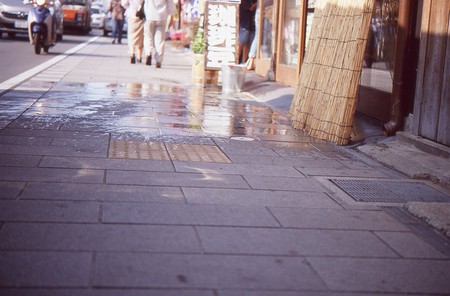 Dr. Paul Satur, a researcher with the Centre for Water Sensitive Cities at Monash University (Australia) and the co-founder of Our Future Cities, believes that this simple act could actually minimise greenhouse gas emissions: “Citizens practicing uchimizu in Japanese urban areas have been found to use less air-conditioning, which significantly decreases their domestic energy consumption and thus greenhouse gas emissions (Matsubara & Sawashima, 1993). It was also found that the level of outdoor comfort among citizens is higher in areas that applied uchimizu.”

This reduction is incredibly important considering Japan’s current reputation for being one of the nations with the highest temperature increases in modern times. “Tokyo has experienced a mean temperature increase of 3.2°C over the past 100 years (Kusaka et al., 2016). While this may not seem like a lot, this in fact places Tokyo at the top in terms of global scale-warming,” Dr. Satur explained.

Beyond the scientific side, uchimizu plays a role in the cultural make-up of many of Japan’s cities, with special water-throwing ceremonies being held during summer festival events. “The act of uchimizu reminds me of childhood summers,” explains Tokyo native Yuri Nabata, 32. “At my primary school we would pour water outside of the classroom to stay cool. Going to school in inner-city Tokyo, a large portion of our outdoor play and sports area was made from a hard, slightly rubbery type surface, it would get incredibly hot in summer, so pouring water on this ground would help alleviate the heat a little.”

Uchimizu’s real impact may actually not be quite so immediate, according to Dr. Satur, who notes “it should be acknowledged that studies suggest uchimizu has a few drawbacks, it’s not effective in the hottest periods of the day, nor does it offer much respite in areas that are exposed to direct sunlight or where the ground temperature is already high such as on paved streets and paths.

“However, this long standing cultural tradition does serve as a valuable opportunity to activate awareness among citizens, and to stimulate citizen participation in solving urban heat stress problems, greenhouse gas reduction and water saving initiatives (Solcerova et al., 2018). With the right perspective, uchimizu presents an opportunity as a tool for sustainable capacity building rather than a barrier.”

So, next time you’re wandering the streets of Tokyo and see a shop owner pouring water on the footpath outside, not only will you now know why, but you can also use it as a little reminder as to why it’s just so important to be environmentally conscious citizens.