The Best Ryokans to Stay in When Visiting Japan 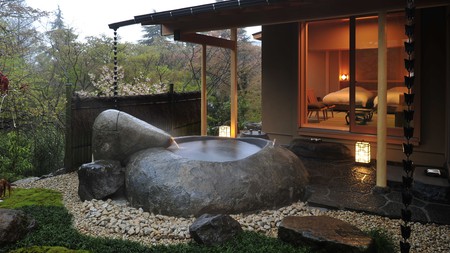 For an authentic experience in Japan, why not opt for a stay in a traditional ryokan? These highway rest stops originated in the Edo period, from the 17th to the 19th century – here’s our pick of the best across the Land of the Rising Sun.

Traditionally built from wood and featuring tatami-mat flooring, communal bathing and dining areas, ryokans maintain their popularity among the Japanese and foreign travellers. They are expensive compared to the capsule hotels of Tokyo and chain inns, but you can’t put a price on authenticity. 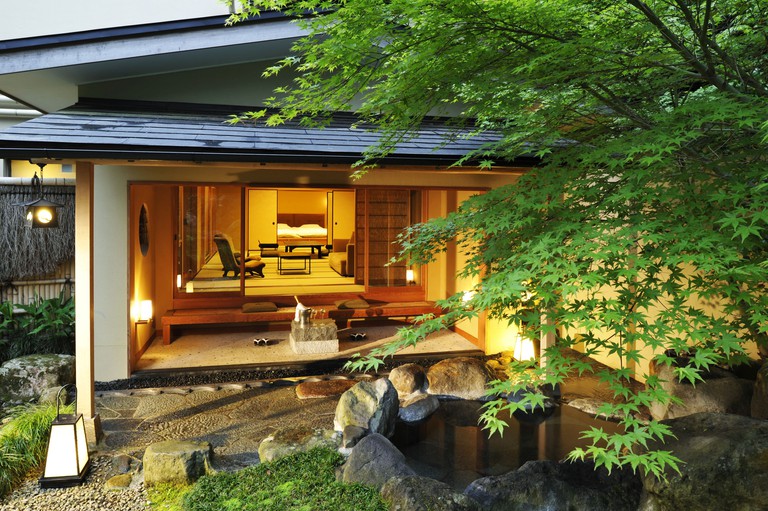 Built on the grounds of an Imperial Family member’s former summer villa, Gora Kadan is an accommodation imbued with an essence of upmarket luxury. The ryokan sits in the lush hills of hot-spring-dotted Hakone, a popular weekend destination from Tokyo. Renovated to a standard that would make the Imperial Family proud, it features conceptual indoor-outdoor spaces, baths that resemble contemporary art pieces and traditional Japanese flourishes. 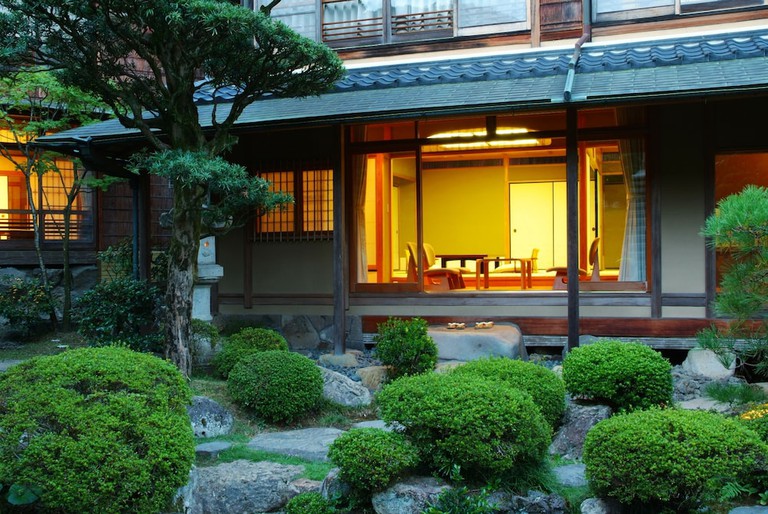 With 150-plus years of history and a style that’s nothing short of timeless, Nishimuraya Honkan is a luxurious ryokan in the onsen (hot-spring) town of Kinosaki in the volcanic mountains of Hyōgo Prefecture. Nishimuraya Honkan fits right into this traditional landscape. With a lush strolling garden and authentically styled rooms combining Japanese elegance with contemporary luxury, it’s the right balance of sophistication and relaxation. 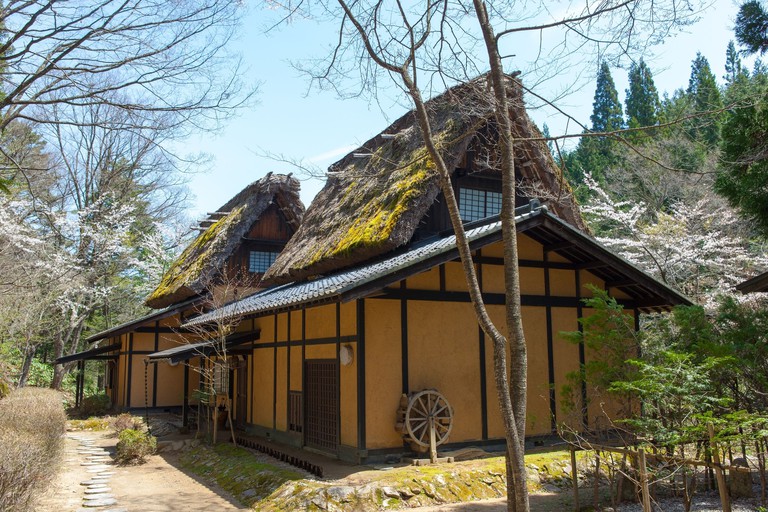 The Hida-Takayama region of Gifu Prefecture is best known for the gassho-zukuri (thatched-roof houses) and minka (traditional rural dwellings) that dot the mountainous landscape. Wanosato is a renovated minka – a mystical place with a 160-year-old history. However, it has been reborn to be less of a common home and more of a luxury retreat. With mountain views, sansai (mountain vegetables), wasakana (river fish) and wagyu-level-delicious Hida beef, it’s a side of regional Japan in which to indulge. 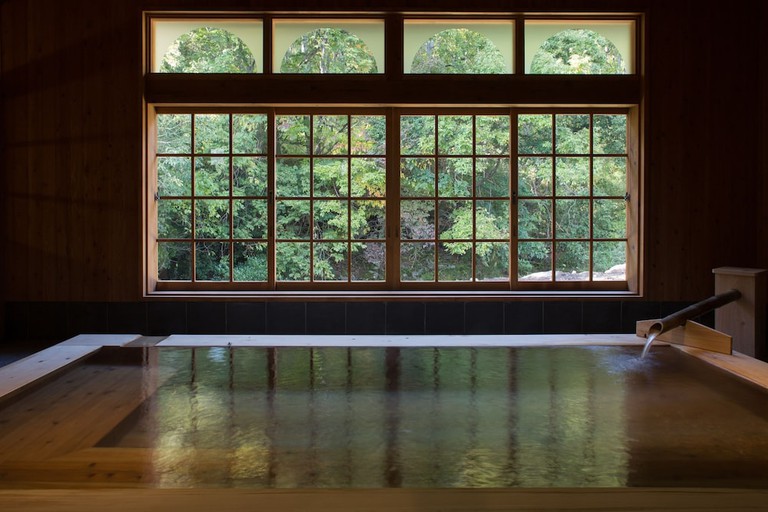 You’ll find Miyama Sansou in a valley surrounded by towering hot-spring-filled mountains, deep in regional Kumamoto. Comprising a small cluster of villa-type homes, this impressively contemporary version of a ryokan promises Japanese-style luxury. Plenty of hot-spring baths and incredible cuisine in a secluded piece of land create the ultimate escape. 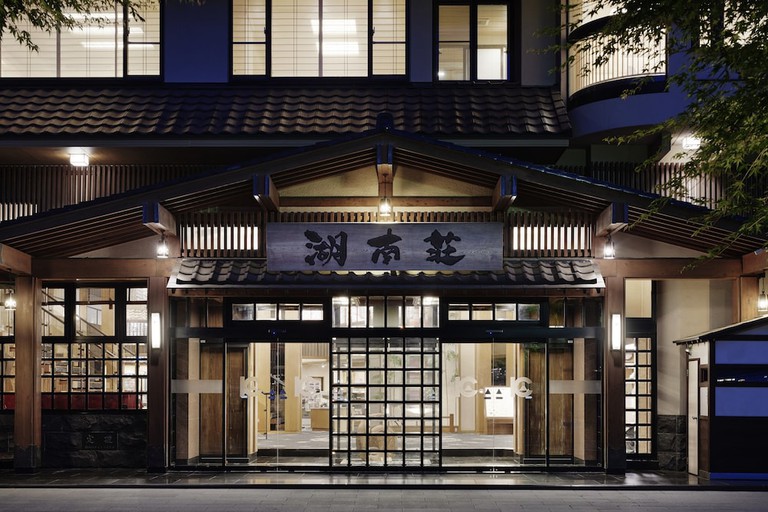 The area known as Fuji Five Lakes has long been a retreat favoured by those looking to wash off the stresses of city life. It’s home to the Fuji Kawaguchiko Onsen, where you’ll find Konansou – a lush ryokan at the base of Mount Fuji with traditional-modern rooms, outdoor baths with mountain and lake views, and fresh seasonal cuisine served daily in the restaurant or your room. 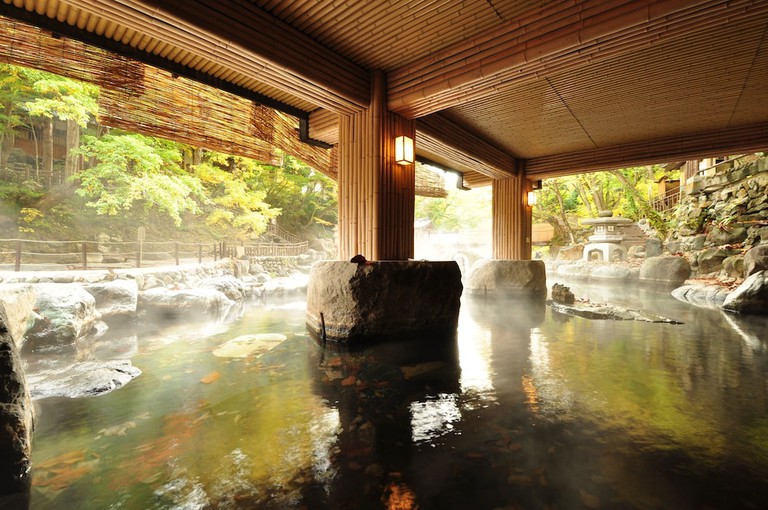 With the largest outdoor bath in Japan, Takaragawa Onsen Osenkaku is a haven for the most serious of soakers. It sits in the Minakami Onsen area, in the rugged landscape of Gunma Prefecture. Classic facilities are split across three buildings – the Main Hall, East Building and #1 Annex Building – each decorated slightly differently, showcasing this secluded retreat’s uniqueness and style. 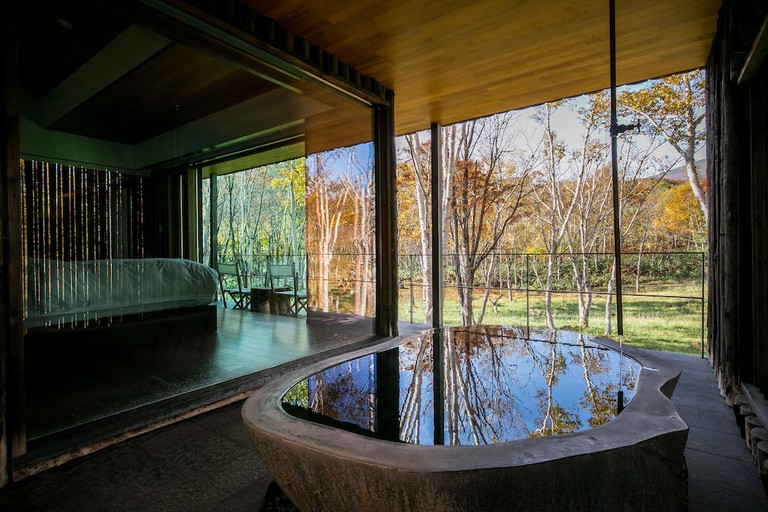 Hokkaido’s snow-capped mountains are home to Zaborin, one of the most enthralling ryokans in Japan, with a modern display of artful architecture. It comprises 15 villas that blend rustic country-home style with contemporary flourishes and a sense of Japanese essentialism. Each room features an indoor and outdoor onsen bath, filled with pure volcanic water topped with sprawling country views. 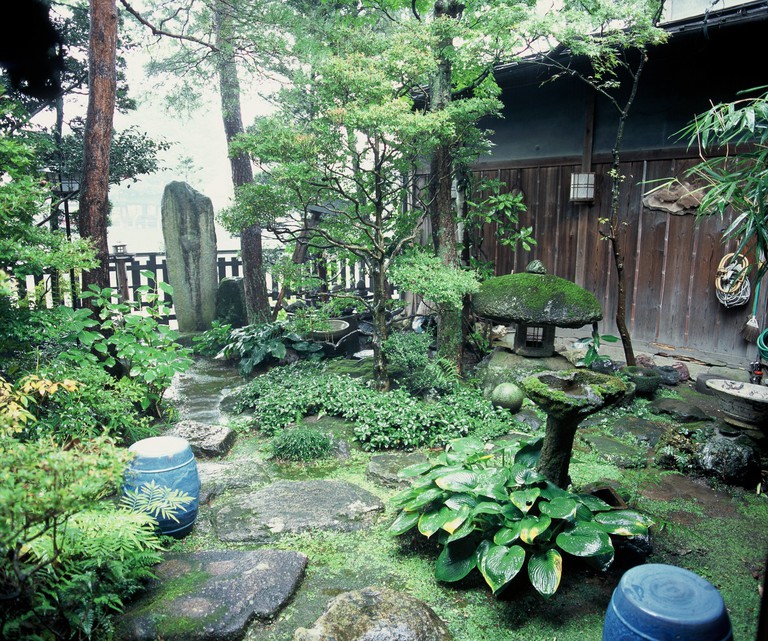 Sumiyoshi Ryokan lies in the mountainous region of Takayama in Gifu Prefecture, on the idyllic Miyagawa River. With rooms overlooking the river or the Sumiyoshi gardens, you won’t find a better place to unwind. The owners have maintained the architecture and style of the Taishō-era building while decorating it with ornaments from the period. You can enjoy traditional Japanese cuisine in your room, and the staff will happily answer any questions about what to eat (or how to eat it). 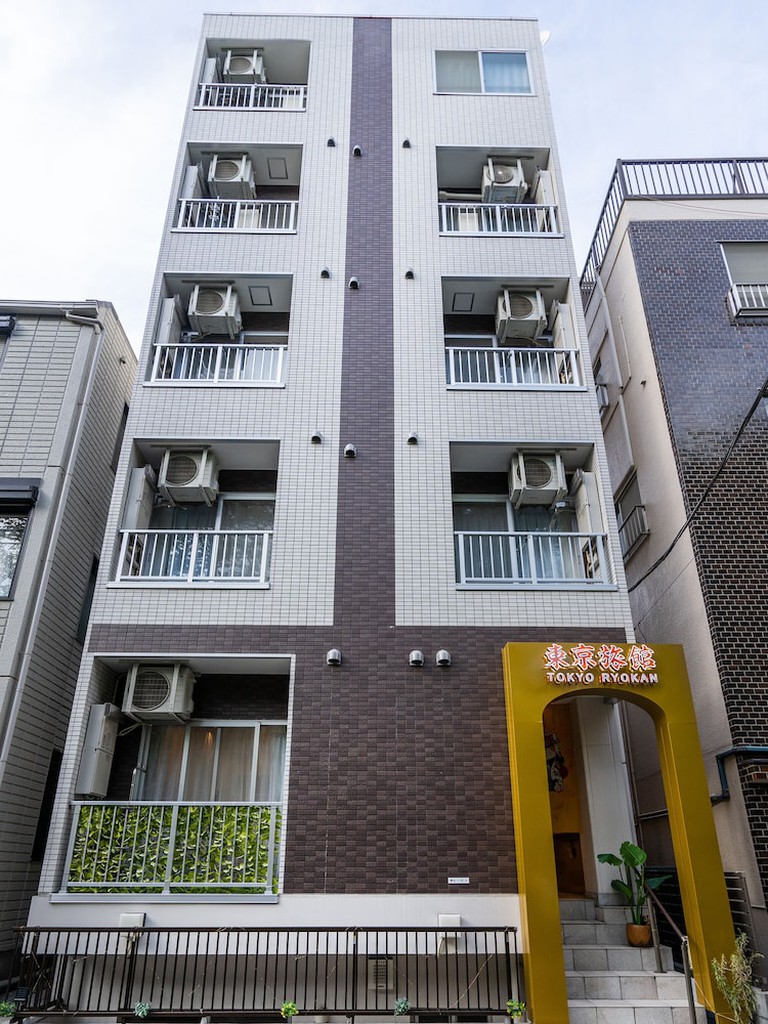 While Tokyo Ryokan has maintained a traditional stance on communal bathrooms, the property is small, with only three rooms, and all facilities are kept to the highest standards of cleanliness. With respect to conventional Japanese living, the ryokan will encourage you to make yourself at home. The most outstanding feature of this traditional inn is the interior, complete with paper walls and doors and minimal decoration. The staff run the property according to fundamental Buddhist principles. 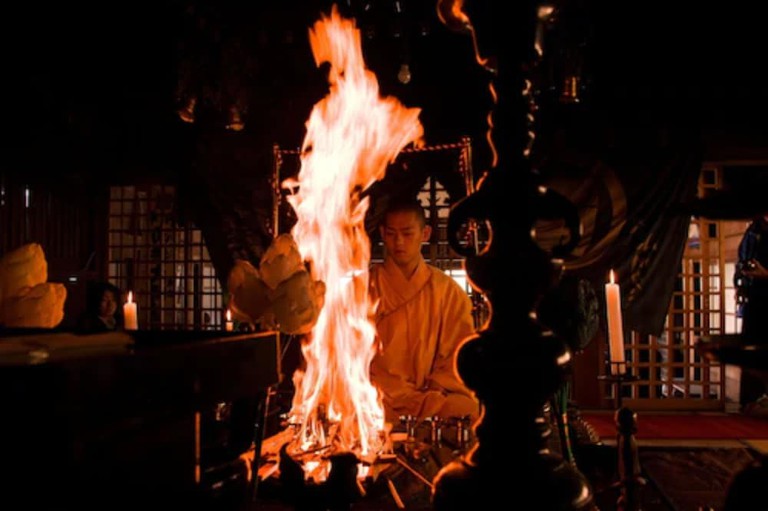 Eko-in is a remarkable place to spend the night, situated in a 1,000-year-old Buddhist temple. You’ll get to stay in a Japanese-style room while using communal facilities. One room has a private onsen, but all have views of the inner garden. As you might expect, you’re welcome to join temple practices, including using the Ajikan Practice Hall for meditation, attending morning services and joining a Goma fire ritual. Lessons in Buddhist sutra writing are also on offer. More conventional recreation includes the use of the public onsen (divided by gender), while the cuisine is traditional Japanese vegetarian, which you can eat in your room. 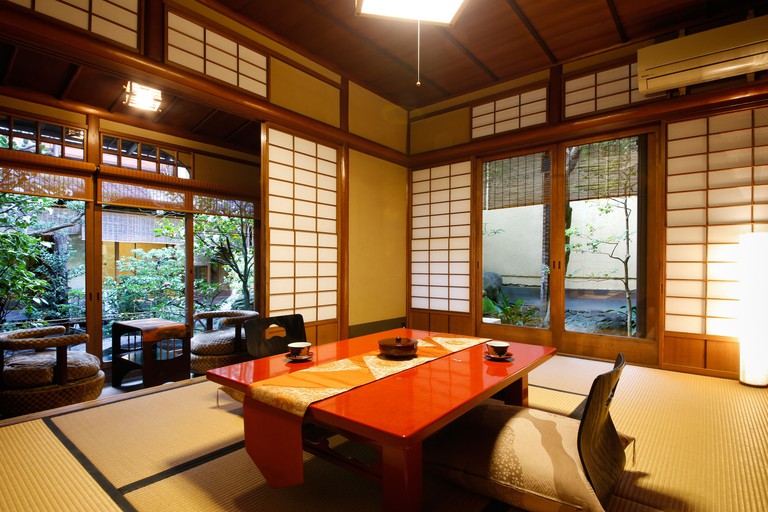 In Kumamoto Onsen town in Kyushu, Ryokan Sanga offers an escape from busy city life and is remarkable for its setting alone. It highlights natural materials, and Mount Aso sits overhead instead of flashing neon signs. Also, taxis and public buses are the only means of accessing this remote location. A world apart from the Tokyo-based ryokans, this one offers you the chance to bathe in onsens, including public outdoor baths, public gender-specific indoor baths and private baths. There’s a variety of rooms; the more expensive options include ensuites and larger living spaces. 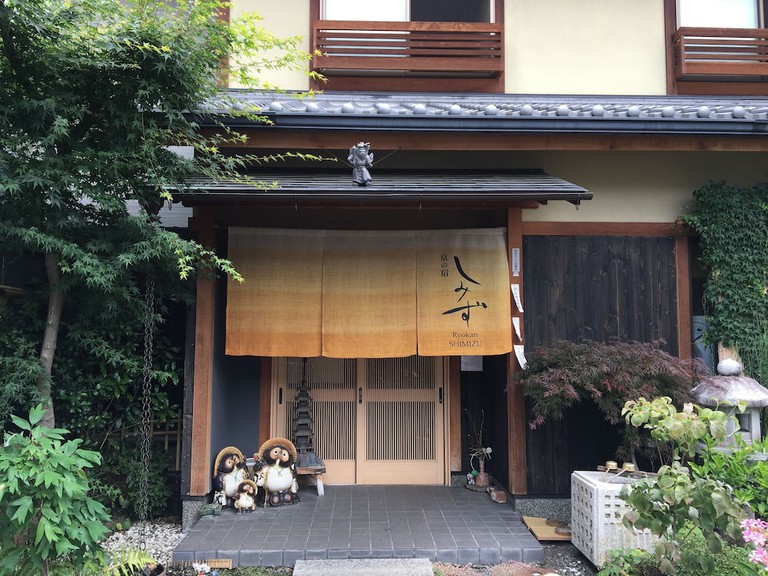 Kyoto-based Shimizu has nine private rooms – each with a shower and toilet – and maintains a sense of calm from the bustling streets without feeling completely remote. There are several baths, some private, including a Japanese lime bath and a hot-spring bath. You can dine on traditional vegetarian meals in your room, take part in evening activities, such as calligraphy classes, and rent bicycles for use around the city.

In historic Tsumago – a well-preserved postal town in the Kiso Valley – Ryokan Fujioto is a minshuku (a budget ryokan) surrounded by a private garden. Traffic is virtually non-existent here as cars are prohibited on the main street during the day. The inn’s owners provide traditional Japanese meals (serving as many as seven courses), yukata to wear while dining and Japanese footwear, which you can wear around town. It also has a traditional Hinoki bath, run with scented Kiso Valley cypress wood. Although Fujioto is not as grand or as large as some of the other ryokans on this list, this family-oriented space has a comforting characteristic often lacking in the more popular ones. 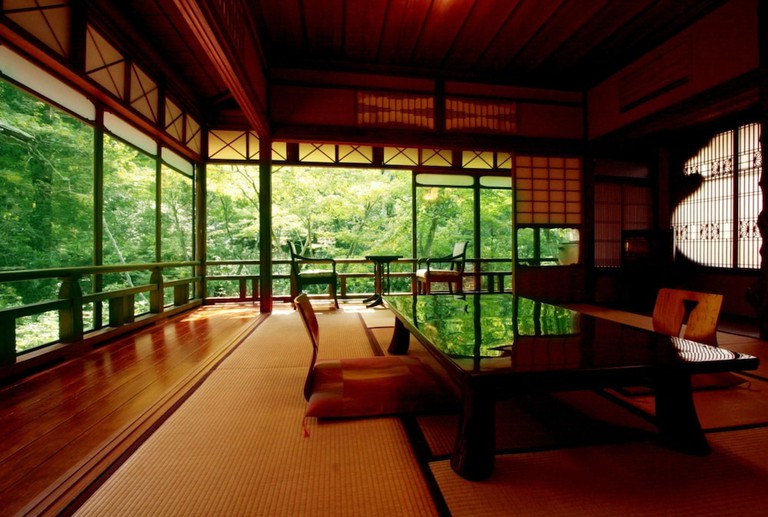 On the island of Miyajima (also known as Itsukushima), Iwaso Inn is a luxurious ryokan with a long history. It opened in 1854 and provided shelter throughout the Meiji period, after which it became a modern Japanese hotel. It’s close to Hiroshima but has a much sought-after distance from the popular tourist destination. It comprises four cottages and two other buildings housing rooms; some accommodation options have private onsens and toilets. There are also two large, outdoor communal baths sheltered from the elements. 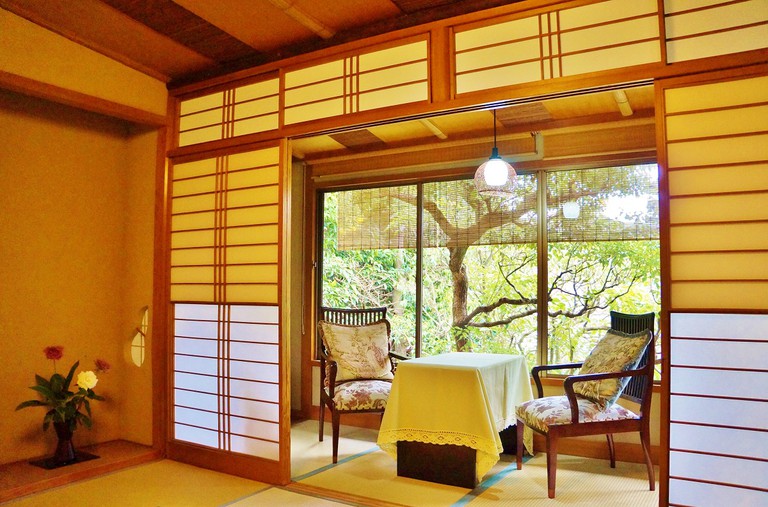 The beautiful Tamahan lies in the historical Gion district of Kyoto, where shrines and temples sit alongside modern bars and restaurants. Originally a private summer home, this ryokan opened to paying guests in 1929. In addition to its high standard of rooms, it offers a delicious Japanese breakfast. There are a couple of handfuls of private rooms, each of which boasts a private wooden bath, European-style toilet and bidet, and all have air conditioning in the summer and heat in the winter. 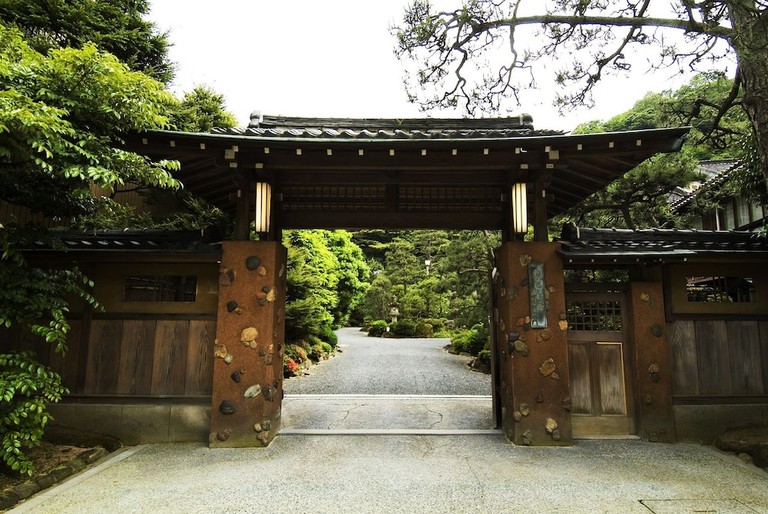 Founded in 1688 in Kinosaki Onsen – a hot-spring town in Hyōgo Prefecture – Yutouya Ryokan is popular with Japanese creatives. Its rooms feature a private bath and toilet or a private toilet only. It also has an indoor bath and a family bath outside. Although you’ll want to visit the local restaurants to try Kinosaki Onsen’s famed seafood (the crab is especially good), the ryokan’s menu is something to write home about, offering seafood alongside delicacies such as wagyu beef.