The Top 10 Artworks By Yoko Ono

At once a conceptual artist, performer, singer, film-maker and peace activist, Japanese multimedia artist Yoko Ono is known for her avant-garde and expressive oeuvres. Spanning many mediums and created both independently and in collaboration with her late husband John Lennon, we pick her ten best works you need to know. 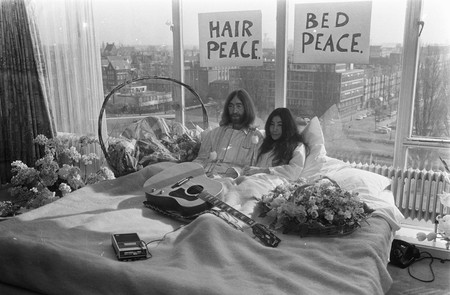 Blessed with a raw talent often obscured by the attention given to her relationship with The Beatles’ headman, Ono remains an enigmatic artist whose groundbreaking contributions to the experimental art scene of the 1960s has largely gone unnoticed. Once described by Lennon as ‘the most famous unknown artist,’ Ono in recent years has gained greater admiration as an inspirational figure in her own right with a series of retrospective exhibitions that disseminate powerful messages of love, peace and protest.

Against a backdrop of raging war in Vietnam, Ono and Lennon married in 1969, and for their honeymoon, they invited press to their hotel room at the Hilton in Amsterdam where they stayed in bed for a week as a form of non-violent protest against war. The couple took the concept of a sit-in to a new experimental level to become a peace performance, and after another ‘bed-in’ was staged in Montreal, they spread the message ‘War Is Over! If You Want It – Happy Christmas From John and Yoko’ on billboards in 11 major cities around the world. 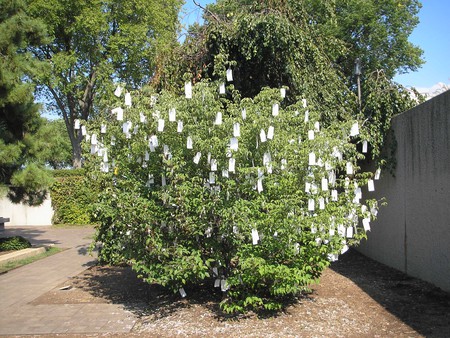 Ono’s began her participatory art installation Wish Tree in the early 1980s, and it remains an ongoing project that has gained respect and renown in recent years. Under Ono’s direction, a tree native to a site is planted and viewers are invited to tie a written wish of hope to its branches. Various trees have been used for the project and locations include New York, Tokyo, London, Venice and Dublin. Her 1996 Wish Piece had the instructions: ‘Make a wish. Write it down on a piece of paper. Fold it and tie it around a branch of a Wish Tree. Ask your friends to do the same. Keep wishing. Until the branches are covered with wishes.’

In 1964, Ono stunned audiences when she sat motionless on stage at Carnegie Hall, New York and allowed people to cut clothes from her. As an early piece of feminist art, the provocative act, that called into question of interpersonal relations and destruction, involved Ono laying down a pair of scissors on the ground and inviting the audience to come forward and cut off pieces of her clothing until finally she was left in her underwear surrounded by rags. 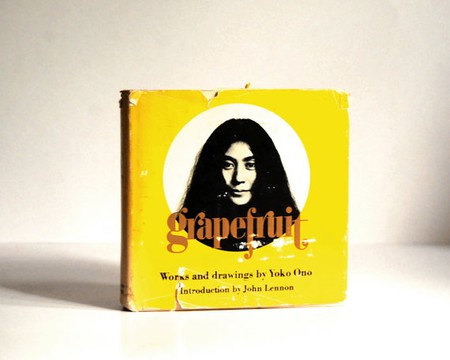 Grapefruit by Yoko Ono, published by Simon and Schuster

In 1964, Ono published a small book titled Grapefruit which with words and images offers a set of instructions through which the work of art is completed either literally or through the imagination of the reader. Both delightful and subversive, the influential book was deemed a monument of conceptual art of the early 1960s, and Ono has enacted scenarios of the book throughout her career.

As well as structural art, Ono tried her hand at experimental film-making creating 16 shorts between 1964 and 1972. Her most renowned was the 1966 Fluxus film No. 4, often referred to as Bottoms, which consists of five and a half minutes of close-ups of buttocks of both men and women walking on a spot in her loft and accompanied by a soundtrack of interviews with the participants. Although the film’s charm was its sense of innocence, it was still rated X by British censors at the time.

Highly influenced by Marcel Duchamp and Conceptualism, Ono became interested in using domestic household objects to provide visual representation for her poetic imagination. In 1969, she created the installation Half a Room as a response to waking up to find that her former boyfriend Anthony Cox had disappeared from her flat. It simply contained a chair, a suitcase, and a space heater, each slashed in half and painted white as a visual representation of the rupture of breakup and heartbreak that is both palpable and touching. 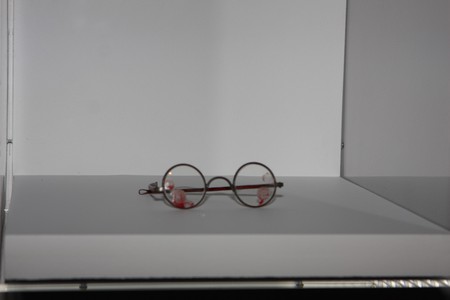 Created in 1993, Ono’s unambiguously named Family Album was unexpectedly personal in its revelations. The exhibit consisted of domestic items set in clear glass boxes, including a pair of heels, a coat hanger and a hairbrush, each with chilling red blood stains across them. While the round-rimmed spectacles with red finger smudges on the lenses are an undeniable nod to her life with John Lennon, as a whole, the project could be interpreted as anyone’s family trauma.

‘My ultimate goal in film-making is to make a film which includes a smiling face snap of every single human being in the world,’ announced Yoko On0 in 1967. Her ongoing #smilesfilm project is a vision of mass participation inviting people to upload images of their smiles to Instagram and Twitter that are collected on the #smilesfilm website and app. The idea is to tap into the collective power of smiles, or as Ono put it: ‘each time we add our smiles to #smilesfilm, we are creating our future, together. Give us your smile!’

As precursors to Grapefruit, Ono exhibited in the early 1960s instructional paintings, each with a seemingly simplistic message that encouraged interactive participation. These included Smoke Painting in which viewers were asked to burn holes with a cigarette into a canvas until it disappeared, along with Painting to Be Stepped On, which consisted of a piece of canvas spread across the floor upon which audiences were invited to tread. 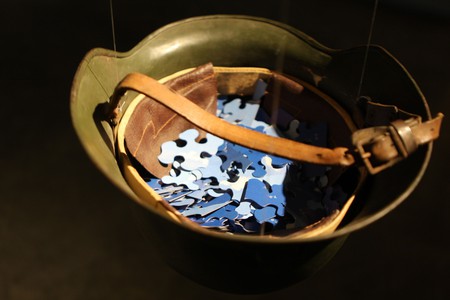 Pieces of Sky by Yoko Ono exhibited in the War Is Over! Exhibition, Sydney Museum of Contemporary Art, Australia | © Eva Rinaldi/Wikicommon

As part of her recent worldwide retrospectives, Ono presented a room of war-themed installations collectively named Pieces of Sky. This consisted of upturned soldiers’ helmets dangling like hanging baskets from the ceiling. Each one was filled with jigsaw puzzle pieces depicting fragments of a blue sky, and on the floor, she placed three large conical mounds of earth labeled Country A, Country B, Country C, pointing to the divisive effects of war. The infamous ‘War is Over’ poster slogan sat behind on the wall, recalling her lifelong mantra of ‘Give Peace a Chance.’