This Woman Has Been Dubbed the ‘Beyoncé of Japan’, and She’s Fabulous 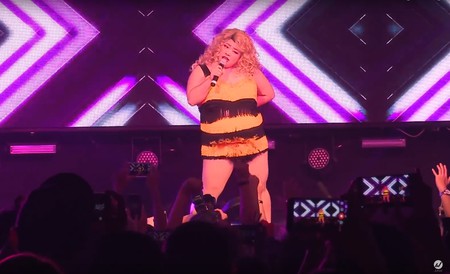 Watanabe specializes in the genre of Japanese comedy known as monomane, or celebrity impersonation. She got her big break in 2008 appearing on Japanese television variety shows performing her over-the-top Beyoncé lip sync impersonations.

In a country where, according to the Ministry of Education, Culture, Sports, Science and Technology, the average female under 40 weighs less than 115 pounds, the sight of a 200-pound diva working it – and killing it – on TV was unforgettable.

Where many other comedy acts in Japan become one-hit wonders, Watanabe’s star has continued to shine brightly. Not content to chill on the variety show circuit, she branched out into TV commercials and regular appearances on television dramas. In 2014, she even debuted her own clothing line, PUNYUS, featuring a range of cute, cool, and quirky fashion for girls of all sizes.

“Of course, larger women want to be fashionable, too, but there weren’t any fashionable clothes for us,” Watanabe explained to the Washington Post about her reasons for starting the brand. With her body-positive message, Watanabe is a key figure in the recent movement in Japan to embrace pocchari, or plus-sized, women with cute names like “marshmallow girls”.

In 2016, she embarked on a sold-out world tour of New York, Los Angeles, and Taiwan (Watanabe is half-Taiwanese). The show was complete with comedy, backup dancers, her signature Beyoncé lip sync, and Lady Gaga impersonations.

Declared a 2016 Vogue Japan Woman of the Year and with nearly seven million Instagram followers and counting, there’s no question that Naomi Watanabe is the “Beyoncé of Japan”.