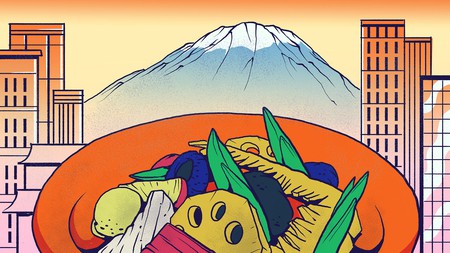 Not one drop of water or gram of ingredients should be lost in the preparation of shojin ryori, a Zen Buddhist cuisine that embraces core aspects of the religion’s teachings. Over 1,000 years old, shojin ryori is still mindfully prepared by monks across Japan, including Monk Hojyou.

“Refraining from violence and killing is fundamental,” says Monk Hojyou, a spry and thoughtful 73-year-old Soto Zen Buddhist. Here at Fusaiji, his temple in Murakami, Niigata, he teaches Zen meditation and serves shojin ryori – a variety of Japanese cuisine entwined with Buddhist philosophy – to parishioners and visitors.

“Since killing and consuming animals is forbidden,” Hojyou adds, “meat and seafood are taboo ingredients.” Nearly all shojin ryori dishes are vegan – although depending on the Buddhist sect, the season and the location, some shojin ryori cooks utilise dairy products and eggs. Soybeans and soybean products such as tofu and yuba (soy-milk skin), as well as fu (wheat gluten), tend to be prominent among a range of plant-based ingredients.

The spread of shojin ryori in Japan

Korean Buddhist monks introduced Buddhism and their spiritual philosophy regarding food to the Japanese in the sixth century. In the 13th century, Zen Buddhists from China formed a second wave spreading shojin ryori and other aspects of Buddhism throughout Japan. 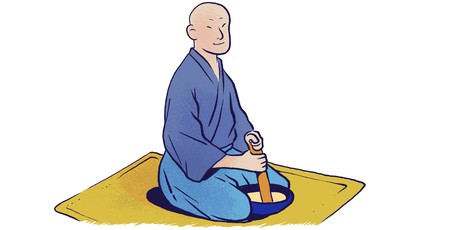 Although shojin ryori has evolved over the centuries, the underlying philosophy has not changed. Today, the shojin ryori dishes you can find in restaurants and even supermarkets across Japan are similar to the ones eaten by Buddhist monks over 1,000 years ago. Classic elements in shojin ryori meals include sesame tofu or simmered bamboo shoots.

There are similarities between vegetarianism and shojin ryori, but Hojyou explains that “the philosophy is different. The preparation of shojin ryori mirrors a belief system. Being satisfied with what one has is part of that thinking. Cooks should not waste ingredients.” In his temple’s kitchen and in the monastery where he studied as a novice, cooks do not discard any part of ingredients. For instance, the leaves and bruised portions of daikon all become ingredients.

“Shojin ryori is also an extension of another important Buddhist belief: one should be satisfied with one’s surroundings,” Hojyou continues. In terms of cooking, this means that shojin ryori chefs utilise seasonal and local ingredients. Different monks and cooks, though, follow this policy to varying degrees. Autumnal shojin ryori meals are likely to include mushrooms, and spring dishes tend to incorporate the shoots and sprouts of mountain vegetables.

Buddhism for the belly

A significant ingredient in the shojin ryori experience is mindfulness on the part of the diners and cooks. Sarah Hodge is an American living in Japan who practices zazen and cooks shojin ryori at home. “Preparing and eating shojin ryori is closely linked to my practice of Zen and the concept of mindfulness,” she says. “As you focus on preparing the food, not a single grain of rice, scrap of peel or drop of water is to be wasted. We reflect on the origins of the very vegetables and the grains we are preparing, thanking the land and farmers who made this meal possible.”

The number five has significance for members of most Buddhist sects. There are five main rules of behaviour, and many ancient Buddhists believed in the following five elements: earth, water, fire, wind and space. The rule of five extends to shojin ryori: all meals should offer five colours (green, yellow, red, black and white) and five flavours (sweet, sour, salty, bitter and umami). Temples that serve shojin ryori to guests are likely to provide dishes that follow the rules of five colours and tastes.

(Hojyou says that he does not take these rules too seriously, however. For instance, most of the temple dishes in winter are preserved foods, lacking such colourful variety and flavours.)

Shojin ryori is found the length and breadth of Japan. Some 750km (466mi) south of Hojyou’s temple, at Shukubo Sanrakuso on Mt. Daisen in Tottori, Goken Shimizu – also a Buddhist monk – serves both traditional and more innovative interpretations of the cuisine. Sanrakuso is a lodge for Buddhist pilgrims and travellers interested in learning about Buddhism. Visitors can experience zazen meditation and the ‘Zen Burger’. The ingredients include tofu, soy sauce, rice, lotus root, and other vegetables. It is a modern – and very tasty – example of what Sarah Hodge calls “edible Zen”.

The recipe below is for a typical Japanese vegetarian dish that can be shojin ryori if both cooks and diners follow the principles above. 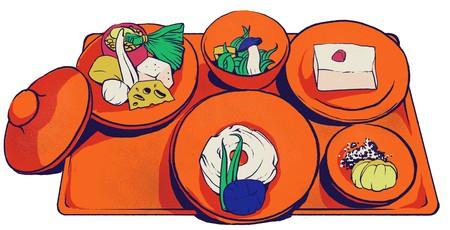 Clean and cut all vegetable ingredients into strips about 1 inch in length and about one-quarter inch in width.

Soak burdock in water for about five minutes.

Remove the burdock from water.

Stir fry the carrot and burdock strips on medium heat for two minutes.

Add the other vegetables. Stir-fry for one minute. Add soy sauce, sugar, sake and mirin.

Briefly continue to stir and mix until the seasonings and vegetables.