The History Behind Tsutenkaku, One of Osaka's Most Beloved Landmarks 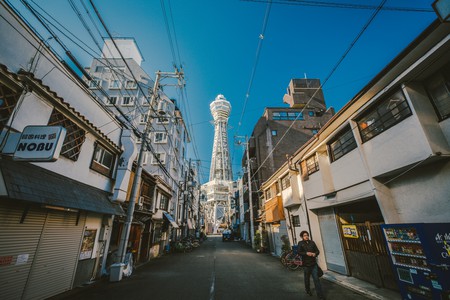 Tsutenkaku is a tower in Osaka that was an architectural marvel when it was built. Once hailed as the “tallest structure in all of Asia” it is now dwarfed by most of the city’s skyscrapers and apartment high rises. Yet, the structure has remained a prominent symbol of the city for many reasons.

In the early 1900s, Japan was in the midst of the Meiji Restoration, a nationwide modernization project. As one of the country’s biggest metropolises, Osaka was a leading participant. In 1912, a tower modeled after both the Eiffel Tower and the Arc du Triomphe in France was constructed in the city in a new neighborhood called Shinsekai. Shinsekai – which means “new world” – was a futuristic district intended to inspire and amaze. Tsutenkaku – meaning “building leading to heaven” – was the centerpiece of Shinsekai. At the time, people were stunned by the impressive machinery and incredibly lofty structure that characterized the area. Shinsekai quickly became a symbol of progress and Westernization in Meiji era Japan. 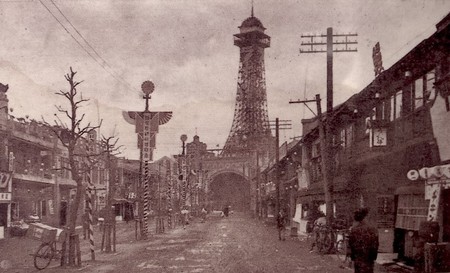 The (literal) rise and fall of Tsutenkaku

At the time it was erected, Tsutenkaku was the tallest structure in Asia at 64 meters (210 feet). This captivated audiences who flocked to see it. Surrounding Shinsekai also drew visitors with an amusement park which was connected to Tsutenkaku by cable car. Luna Park was only open for a short time, but it made a lasting impression. The festive atmosphere remained in people’s consciousness and permeates the district to this day. Even after Luna Park closed and visitorship dwindled, Tsutenkaku proudly stood.

Then, WWII erupted in Japan in the late 1930s. In 1943 there was a fire that damaged Tsutenkaku; shortly after, the tower was dismantled and melted down to use as steel as part of the war effort. After the conflict finally ended, local citizens fought for its reconstruction. Thanks to their efforts, Tsutenkaku was rebuilt in 1956 at its current height of 103 meters (338 feet). However, the area never quite returned to its former glory. Instead, it became something else. 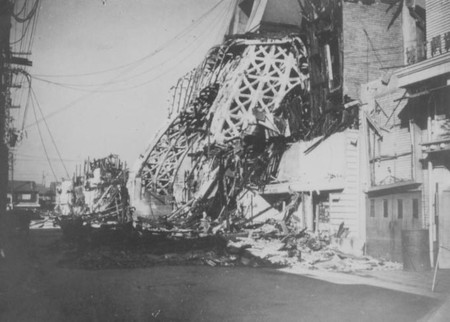 The original tower just after the 1943 fire. | © Public domain / WikiCommons

Today, Tsutenkaku doesn’t even come close to being the tallest thing around; Osaka is inundated with tall buildings, most of which were built much more recently than the once proud tower. However, Shinsekai is still a thriving area and people from all around the world continue to visit the top of Tsutenkaku to take in the view. This is because the neighborhood has retained its festive and fun fair atmosphere. The theme park was replaced with gaudy restaurants selling kushikatsu (fried stuff on sticks – an Osaka specialty), and a gigantic, indoor water park and spa called Spa World. Tsutenkaku Theater at the base of the tower hosts traditional Japanese comedic and musical performances on the weekends. A statue of Billiken, another Osaka symbol, also draws in people seeking luck. Over 700,000 people visit Tsutenkaku every year.

Plus, even though it’s short, Tsutenkaku still stands out. It’s all neon-lit – well, as of 2011, LED-lit – at night. Hitachi ads usually light up the sides, but the tower also displays public service announcements. The colors of the lights change with the seasons and also show the forecast for the following day. The tower is so precious that the area immediately around it isn’t packed with skyscrapers, so you can still see the colorful lights at night if you’re strolling through Shinsekai. It’s always exciting to catch a glimpse of it shining brightly in the distance. 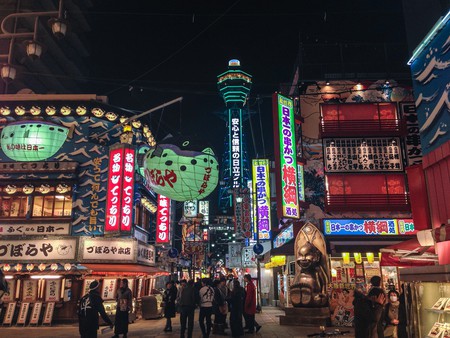 Tsutenkaku and the surrounding area lit up at night. | © cotaro70s / Flickr
Give us feedback