The Best Things to See and Do in Kumamoto 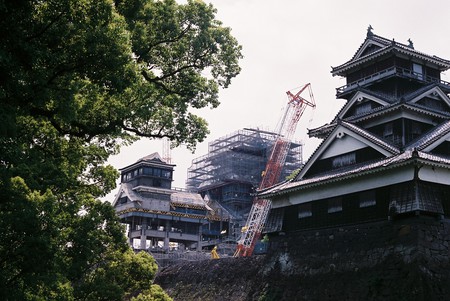 Situated on the island of Kyushu, just south of the Japanese mainland of Honshu, is Kumamoto, one of the country’s most stunning and underrated cities.

In April 2016 Kumamoto came to the forefront of international news following a earthquake that claimed a number of lives and caused plenty of destruction in its wake. In the two years that have followed, the city has bounced back, structurally and spiritually, and is once again open and ready for action. Populated by fascinating manmade historical relics, unforgettable natural wonders, and friendly locals, a visit down here is definitely worth adding to your Japan itinerary. Here’s a guide to some of the attractions you can’t miss. 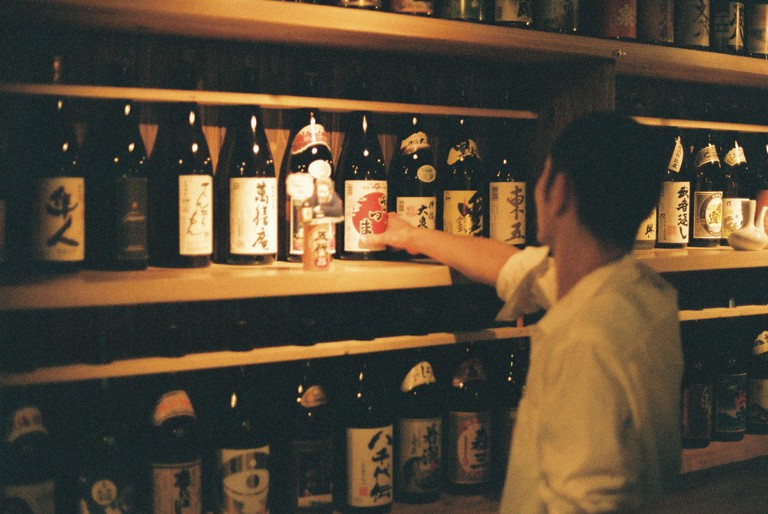 Founded as a way to help introduce foreign visitors to the often overlooked world of shochu, creating a bridge between the local community and its international guests, Bar Glocal is so much more than just a bar: it’s a Kumamoto institution. Owner Nori hails from the nearby volcano dotted town of Kagoshima, by way of a stint living in Australia, but now calls the city of Kumamoto home. The bar regularly hosts special international nights and shochu tasting experiences, so no matter your nationality or Japanese booze knowledge you’ll be welcomed with open arms.

Learn about the reconstruction of Kumamoto Castle 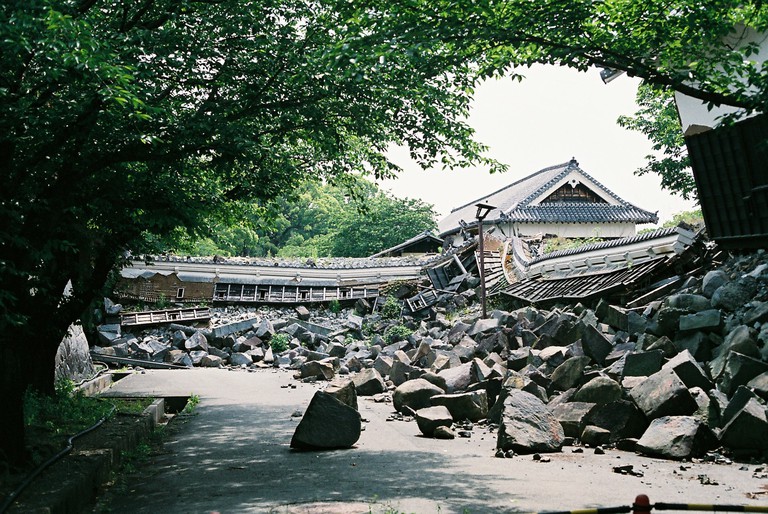 In mid-April of 2016, the city of Kumamoto was rattled to its core after a series of shocks rippled through the city, reaching a whopping magnitude 7.0 mainshock. The most devastating earthquake modern Kumamoto has ever seen managed to leave quite a bit of destruction in its wake, including dismantling a large portion of the city’s most famous site: Kumamoto Castle. Today, the rebuilding process is in progress, but it’s set to take a while, as the city has decided to put the entire thing back together stone by stone like the world’s biggest jigsaw puzzle. You can learn more about this fascinating reconstruction project on site.

Take a day trip to the otherworldly Mt Aso 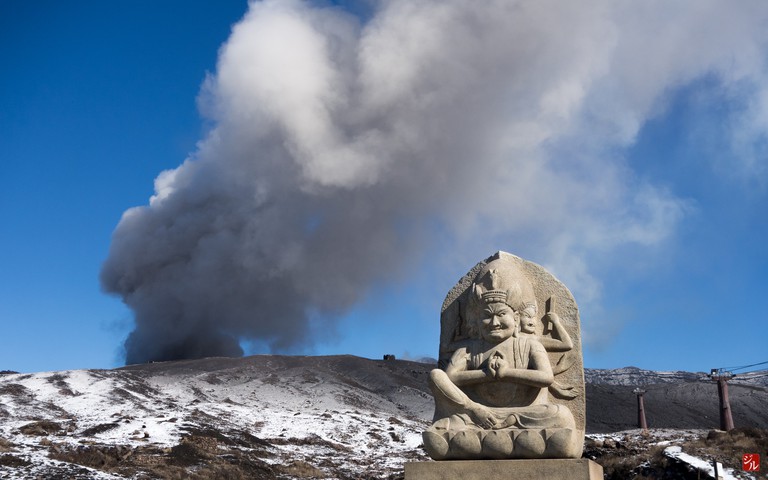 A 30-40 minute bus ride from JR Aso Station or an hour’s train ride from Kumamoto is Mt. Aso, a still active volcano featuring rugged, barren rocky landscapes that are truly out of this world. The mountain’s ancient caldera is one of the largest in the world, stretching a massive 25 km in diameter. Because it is still a steaming, active volcano it is at times closed to the public (in case it explodes – exciting!) but if you are in town when it’s open, do not miss the chance to visit. 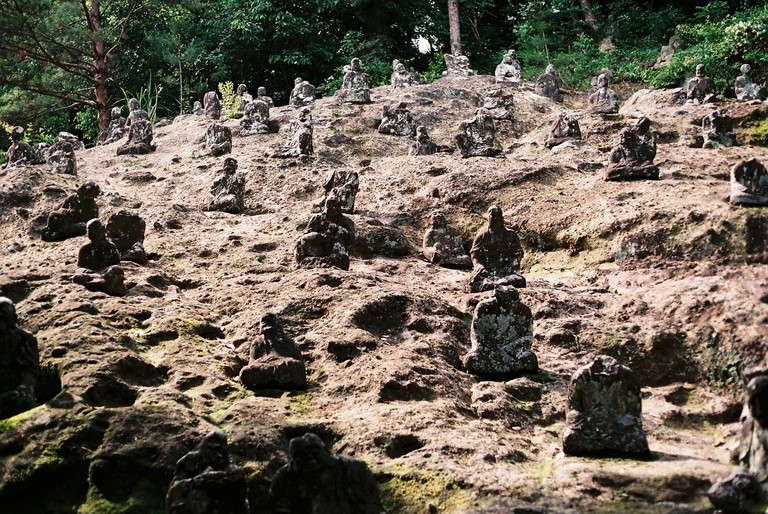 A well-kept Kumamoto secret, Reigando Cave isn’t the easiest place to access via public transport, but it’s well worth the trip if you have an afternoon up your sleeve. This mysterious and sacred cave and the nearby temple known as Unganzenji are positioned in the western hills of Mt. Kinpo, a now 200,000-year-old volcanic peak that’s long been out of action. For history buffs, there’s plenty to learn about Unganzenji temple’s long fascinating history, which dates back to 1351. However, arguably the area’s most atmospheric feature are its small hill mounds dotted with over 500 waist high sculptures of disciples of Buddha, all sitting peacefully in different levels of decay. 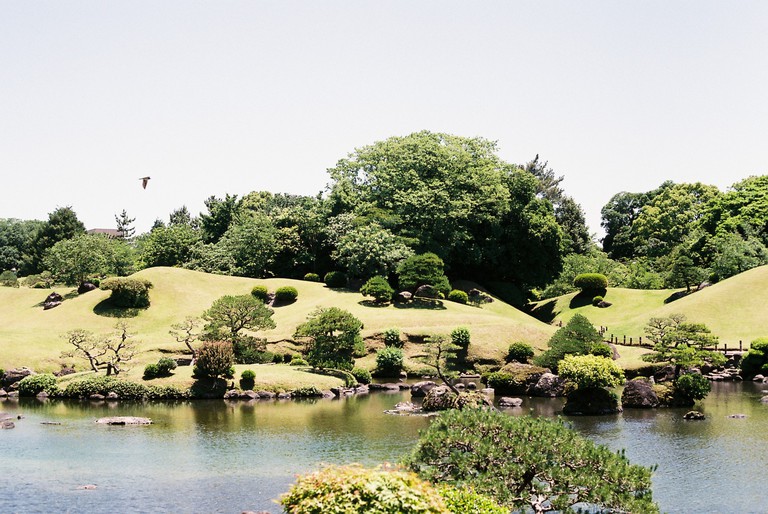 A little more accessible than the other tourist attractions around the Kumamoto area, Suizenji Garden is a stunning Japanese landscape garden, meticulously curated with small, rolling artificial hills and even a tiny replica of Mt. Fuji. Originally built by the famous Hosokawa family during the 17th century, today it’s a tranquil park open to the public and home to a tea house, large pond, classic Noh (traditional Japanese) theatre and the occasional yabusame (horse archery) tournament. The park offers a number of English tours which are especially accessible on the weekend and are well worth joining.

Venture to the hidden Sakizu Cathedral

Best saved for a weekend out of the city, a visit to Sakizu Cathedral will shed light on the nation’s strange and fascinating religious history and its conflicts with Christianity during the 16th century and beyond. The church was originally built in 1596 by the Portuguese missionary Luis de Almeida. During his time as the nation’s ruler, Hideyoshi Toyotomi banned Christianity, kicked out the missionaries and drove the religion underground. This church was built as one of the country’s secret sacred sites, tucked in the port district of Kawaura Town away from major cities so as not to draw attention. It’s a fascinating look at the country’s diverse and often overlooked contentious religious legacy.

Situated atop the lush, tall hillside of Aso is one of Kumamoto’s more unique attractions, the self proclaimed ‘nature theme park’, Aso Farmland. Located inside the lush, foliage-filled grounds of Aso Kuju National Park, the site has plenty of touristy attractions perfect for families and couples. However, its most unique aspect is arguably its dome style accommodation. With a design inspired by traditional Japanese sweets, these domes made from polystyrene foam pieces may not look very sturdy, but following the 2016 earthquake they’ve become subjects of great study, as they survived the natural disaster unscathed. Thanks to their innovative no-beam design, they could be used as a blueprint for the future of quake-proof accommodation.

Mid-September is when Kumamoto is at its booziest and merriest. Horses are Kumamoto’s unofficial animal mascot, basashi (raw horse meat) is the area’s most infamous delicacy, and the Fujisaki-hachimangu (also known as the Drunken Horse Festival) is the city’s biggest celebration. Also known as the Great Festival of the Fujisaki Hachimangu Shrine, the event is held in mid-September annually, and is a loud raucous celebration of regional pride and summer fun. It’s said that in the past the horses were made to drink sake as part of the celebrations, making it not so popular with animal rights activists, but although it’s hard to confirm, it’s unlikely that this still happens.