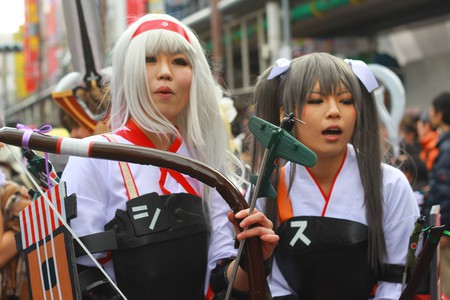 Once a year, a quirky shopping district in Osaka transforms into the site of a giant cosplay festival. Costumed characters crowd the streets to compete in competitions in celebration of all things geek. This massive and uproarious festival grows in popularity every year, proving that an affinity for subculture is becoming more mainstream.

Osaka’s Nipponbashi neighborhood is one of the best shopping and entertainment districts in the city. It’s known locally as Den Den Town – short for Denki no Machi or “Electric Town” – because it is your go-to for any and all electronic goods. From used appliances to the latest in television tech, Den Den Town has it all. 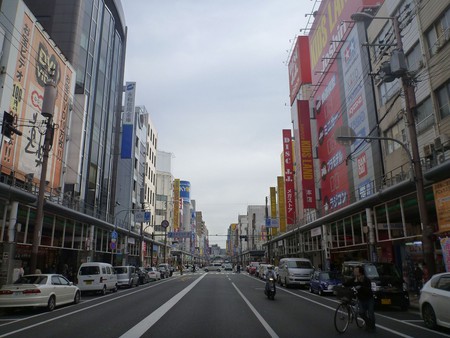 However, what Den Den Town is locally known for is its otaku scene. Otaku represents all things geek. Whether it’s Western superhero movies and comics, Japanese manga and anime, an affinity for trains, a coding hobby, or something in between, it qualifies as otaku. Nipponbashi is the place to find related software, movies, books, games, costumes, and more. People visit to trade and sell Pokémon cards, participate in Magic the Gathering tournaments, buy figurines and action figures, and browse colorful wigs and costumes. It’s no wonder, then, that Nipponbashi was chosen in 2005 as the location for what has become the city’s largest outdoor cosplay festival, the annual Nipponbashi Street Festa.

The festival is held around the spring equinox, either on the holiday itself (which is a day off in Japan) or the Sunday before. Costumed revelers show up by the thousands cosplaying as their favorite anime or manga characters. Cosplay is a Japanese term that comes from the English words “costume” and “play” and the pastime is incredibly popular both in Japan and abroad. Cosplay isn’t only about dressing up as a character but becoming that persona as well. 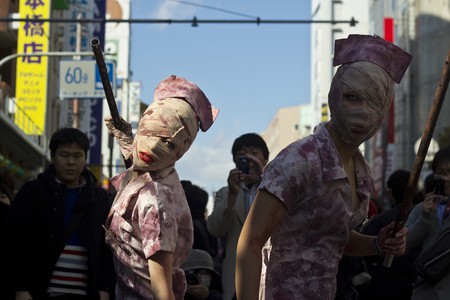 Some people take it a bit too seriously - these zombies look pretty scary! | © Japanexperterna.se / Flickr

Some people dress up just for fun, while other cosplayers put intense amounts of time and effort into their looks. Using wigs, colored contacts, and often a lot of DIY magic, people really are able to embody their characters. The festival is a good chance for serious cosplayers to get their names and social media handles out there and gain recognition for their work. Many people who attend even qualify for the World Cosplay Summit, so these people are the real deal. 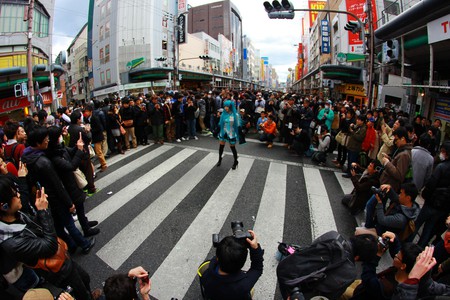 A typical scene - a cosplayer surrounded by scores of photographers and fans clamoring for a photo. | © Japanexperterna.se / Flickr

Anyone can join the festivities either in costume or merely to spectate. Serious cosplayers purchase a wristband for 2000 yen (about 20 USD) so they can participate in the parade, photo ops, and costume contests, as well as use the on-site changing area. There are also vendors, raffles, and live performances to enjoy. Aside from the cosplayers, anyone from hardcore fans looking to meet and photograph their favorite characters to the general public shows up. Annually there are over 10,000 people participating in some way.

The festival is growing year by year as quirky cosplay culture is becoming more accepted and mainstream. The word “otaku” used to have a negative connotation, but more and more people are self-proclaiming themselves as such with pride. Whether or not you’re a fan of geek culture, this fun festival is definitely worth a visit!