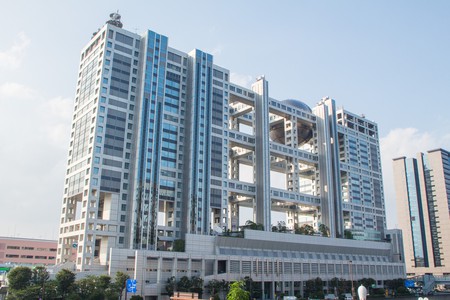 Although when you picture Tokyo, the typical image that is conjured up in your mind is a sprawling metropolis filled with towering, grey skyscrapers, neon-drenched streets, and footpaths literally crawling with pedestrians, in reality there’s so much more diversity to be discovered.

From the lush green inner city parks like Yoyogi, Inokashira and Ueno, to the bookstore-populated streets of Jimbocho, Tokyo is city filled with unique attractions and fascinating cultural pockets. Many of the city’s corners don’t get much more fascinating than Odaiba, the artificial man-made island, located just a short trip from the more famous Tsukiji Market. Filled with bizarre attractions, strange cultural phenomena, and the humming sci-fi sounds of futuristic technology, it’s truly one Tokyo tourist attraction you can’t miss.

Odaiba was built in during the tail end of the Edo Period (1603-1868) as a set of fort islands (the term daiba means “fort” in Japanese), built to protect the city from potential sea-based attacks. Arguably the need for defense was inspired by the arrival of the American fleet that arrived under Commodore Perry, a man who basically forced the nation into international trade in the 1850s. 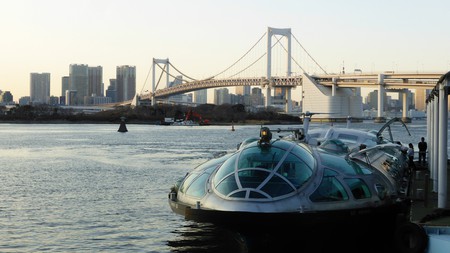 Around 100 years later, when there was no longer need for the protective forts, Tokyo decided to transform the small cluster of islands into two main islands, which it was planned would become some of the city’s biggest development projects. This was during the 1980s when the country was in the midst of a huge economic gold rush, but as the bubble bust, so too did the Odaiba dream. During the 1990s, the island remained pretty much vacant.

In the late 1990s, a few hotels started sprouting up in and around the area, as did attractions to draw and keep the hotel guests in the area. As the years rolled on, the area became home to some of the city’s biggest developments, including the Fuji TV Building, Telecom Center, and Tokyo Big Sight.

So why should you go there, what’s so special about the place?

Well, once you spend a little time exploring the rest of the city’s main hubs, you’ll quickly realize just how traditional Tokyo is: temples, shrines, old Showa-style houses. Even Akihabara the supposedly technological hub of the nation, is home to a selection of historic hangouts and traditional sites. This combination of old and new worlds colliding is what makes the city so fascinating; however, unlike the rest of Tokyo, the culture of Odiaba is basically a pocket of the country without any history. 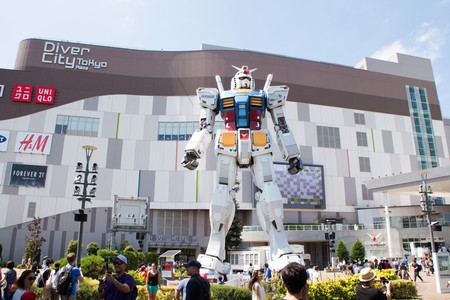 Because of its recent development, there’s no precedent for the place, which means its has an almost “anything goes” kind of atmosphere. People aren’t worried about following what went before, because really nothing did.

This is why perhaps instead of the towering torii gates of a Shinto shrine, you’ll find the cloud-ticking Gundam robot figurine. Rather than a tea-house run by a an expert tea sensei, the neighbourhood is home to a shopping center run by an android. In the place of a traditional museum, soon will sit the world’s first interactive DMM-run immersive digital gallery. Oh also, there’s a mini Statue of Liberty, really “just because.”

A popular date spot for young Japanese couples, the area is gaining a little more traction with Western visitors, but it’s still peanuts in comparison to some of Tokyo’s other central destinations. But that’s exactly why you should go. It’s really, well, and truly the “weird Japan” you read so much about in travel books. And although its culture may feel at times artificial, nonsensical, and incomprehensible, that’s just what makes the place so special. No history to adhere to means to you’re really only limited by your ability to imagine what the future looks like. 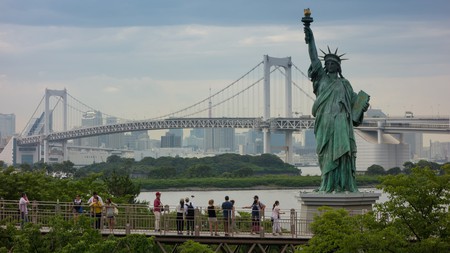 You can catch the Rinkai Line to Odaiba’s Tokyo Teleport Station which connects to Osaki Station on the JR Yamanote Line (the city’s main city loop). Otherwise you can also hop aboard the Tokyo Water Bus, which operates between Odaiba Seaside Park and Hinode Pier and connects to the historic hub (basically the antithesis of Odiaba) of Asakusa.