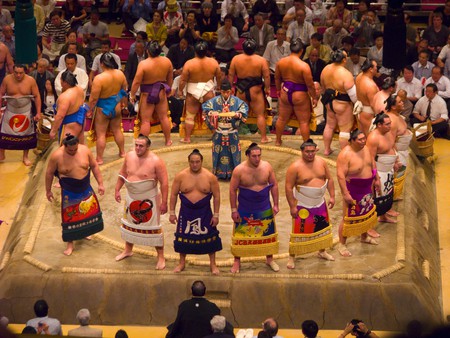 The national sport of Japan, Sumo is known to most people as a modern Japanese martial art. However, the origins of Sumo date back several centuries, when the sport was developed as a way of preserving the ancient traditions of Shinto, a Japanese ethnic religion. Today, elements of the Shinto religion remain an integral part of Sumo wrestling, while the sport’s greatest contenders are elevated to celebrity status. We take a look at the life and times of the biggest names in Sumo.

Taiho is a legend in Japan. Considered by locals to be the greatest Sumo wrestler of all time, he achieved the rank of yokozuna (the highest in the sport) at the young age of 21. He also carries the distinction of having won 45 consecutive matches between 1968 and 1969.

Weighing in at 120 kg (260 lb), Chiyonofuji was considered light on his feet by Sumo standards. What he lacked in size, he made up for in technique; his dramatic throw moves and powerful left-hand grip – known to fans and commentators as his “death grip” – made him one of the most successful and entertaining wrestlers in the game. After retiring, he went on to open his own Sumo stable, which he ran until his passing from pancreatic cancer in 2016.

Initially rejected by the Sumo Association for failing to meet the height requirement, Mainoumi convinced a doctor to inject silicone into his scalp in order to add a few extra centimeters. Despite his relatively small stature, he became widely recognized for going up against contenders over twice his size. The Sumo Association would go on to change the height restriction to prevent other wrestlers from attempting to follow in his footsteps.

Futabayama holds the all-time record for consecutive bouts won, with a winning streak of 69. Having been achieved in the 1930s, many Sumo fans believe his record is unbreakable. 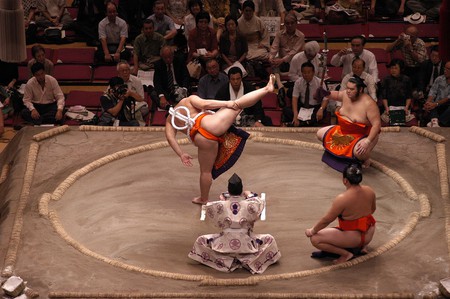 Known in the Sumo world as “Salt Shaker,” Mitoizumi earned his nickname through his pre-match ritual of throwing massive amounts of purifying salt onto the ring, much to the amusement of overseas Sumo fans.

Famous for his eccentric personality and over-the-top warm up routine, Takamisakari has become something of a celebrity in the Sumo world. He carries the nicknames “Mr. Roboto” and “Robocop,” and his warm-ups more closely resemble those of American professional wrestling than traditional Japanese Sumo.

Weighing in at an astonishing 265 kg (584 lb), Yamamotoyama carries the distinction of being the heaviest Japanese-born Sumo wrestler in history and is believed by many to be the heaviest Japanese person to ever live. He was forced into retirement in 2011 due to his involvement in a match-fixing scandal.

Born and raised in Hawaii, Akebono had initially planned on a career in hotel management until a family friend introduced him to a known and respected Sumo stable owner. After joining the stable, Akebono quickly climbed the ranks to become the first non-Japanese-born wrestler to achieve the rank of yokozuna. 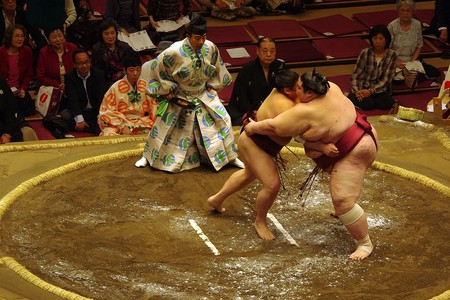 Hailing from Ulaanbataar, Mongolia, Hakuho is known for his strength in the ring and his ability to anticipate his opponents’ moves. He holds the record for most wins in a calendar year, winning 86 out of 90 bouts in 2009.

Starting out as a Canadian WWF wrestler known as “Earthquake,” Tenta moved to Japan and joined a Sumo stable in 1985 after a chance encounter with a former yokozuna in Vancouver. He received a great deal of press coverage, as a Western Sumo wrestler in the ’80s was incredibly rare, and while his professional career lasted less than a year, he won all 24 of his bouts.

Born and raised in Hawaii, Konishiki’s peak weight of 287 kg (633 lb) earned him the flattering nicknames “Meat Bomb” and “Dump Truck.” He is the all-time heaviest wrestler ever to have competed in Sumo (the previously mentioned Yamamotoyama is heaviest Japanese-born Sumo wrestler). Though he never reached the rank of yokozuna, he went on to enjoy a successful career in entertainment and was featured in film, television, and radio. 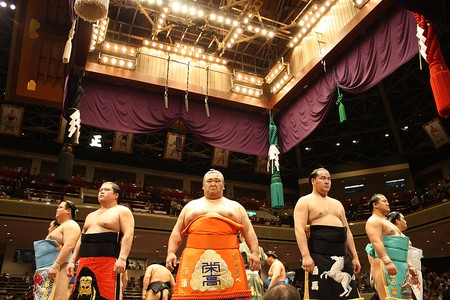 Born Kim Sin-Rak in South Hamgyong, Korea, Rikidozan moved to Japan to train to be a Sumo wrestler, making his debut in 1940. As a Korean wrestler in a traditionally Japanese sport, he faced a great deal of discrimination throughout his career and would leave Sumo for professional wrestling in 1950. He soon became Japan’s biggest wrestling star and is credit with popularizing the sport of professional wrestling in Japan. Tragically, Rikidozan was murdered in a nightclub by a Yakuza gangster in 1963.