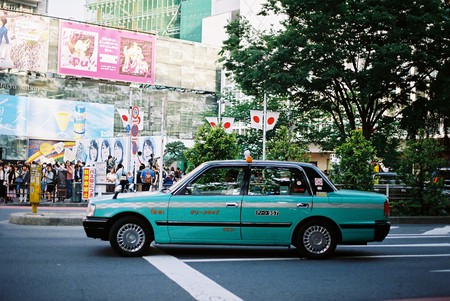 It’d almost be an understatement to say that Japan is in the midst of a tourism boom. According to the Japan National Tourism Organization (JNTO), 2017 saw the nation face its biggest tourism spike in the country’s history with a whopping 28 million visitors. With the 2020 Olympics on the horizon and a continuation of rapid tourism growth in the immediate years to follow, the businesses of Japan are coming up with some pretty creative ways to nab a little of that tourism dollar.

In Yokohama, the country’s second biggest city, a taxi company has launched their latest head-turning venture: ninja-driven cabs. Strangely named ‘Ninja de Taxi’ (is that meant to be French or Italian?), Sanwa Koutsu Group has employed a bunch of ‘ninjas’ who will pick up passengers and take them to their destination, like regular taxi drivers; however, these drivers stay in character the entire trip, making ninja moves and avoiding the usual dreaded small talk.

Don’t try and evade this taxi fare, as each driver is also equipped with a shuriken, a Japanese weapon also commonly referred to as a ninja star; although the company claims that it’s just an origami one, it’s probably best not to take your chances.

Riders are able to reserve a special ninja cab for a 1,000 yen (around US$10) additional charge on top of the fare cost. By offering this service, Sanwa Koutsu Group hopes that they’ll not only give visitors a an unforgettable ride, but they’ll maintain their reputation for being the country’s most unique taxi company.

The company offers a number of other unique taxi ride options, including a bodyguard service, which sees a driver decked out in a black suit and sunglasses acting tough and protective, letting you live out your celebrity wannabe fantasies.

As well as making the taxi experience more enjoyable, the company is looking at new ways to recruit new, younger drivers. According to a 2017 survey conducted by the Ministry of Health, Labor and Welfare, the average age of taxi drivers was 59. Although the Japanese population has long been admired for their longevity, it now means that the country is facing a national aging crisis.

This isn’t the first time ninjas have been used to attract visitors and shake up the tourism scene. Koka, a small city in Western Japan that lies about four hours from Tokyo and an hour and a half from Kyoto, made headlines earlier this year with their initiative that saw ninja security guards employed by local security agency SCC Co. help maintain order during the area’s larger events.