How American GIs and Pleasure Cruises Brought Jazz to Japan 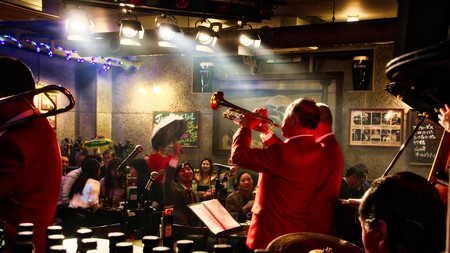 Perhaps surprisingly, Japan now has the second-largest jazz community in the world. Culture Trip delves into the history of jazz in the Land of the Rising Sun, tracing its roots back to 1920s pleasure cruises and American soldiers stationed in Japan during World War II.

Cigar smoke fills the dance hall, where patrons in zoot suits drink whisky, tapping their feet to the tune of ‘My Blue Heaven’ playing rousingly in the background. While this image might ordinarily conjure up scenes of a 1950s jazz bar in Harlem, it was also a popular scenario in post-WWII Japan, when Japanese women in traditional kimonos and their male counterparts attended jazz clubs.

Tokyo-based jazz vocalist Ryutaro Makino, whose parents own the jazz bar Daphne in Kamakura, suggests that Japan’s willingness to embrace Western music has contributed to its evolution into one of the largest jazz communities in the world, second only to that in the US. Makino questions, “Is it because we yearn for Western culture?” He has fallen in love with this genre of music having grown up with jazz vinyl records continuously being played in his household, saying, “My parents had a strong influence on me.”

The introduction of jazz to Japan in the 1910s

Jazz was created in the late-19th and early-20th centuries by African American communities living in the US. So how exactly did jazz become popularised in Japan soon after a war in which they’d fought on the opposing side to America? The answer lies in the luxurious ocean liners of the 1910s from the West that made stops in Shanghai, Manila and Japanese ports before embarking on long voyages across the Pacific Ocean. Onboard passengers from across the world would indulge in the finest wines while being entertained by a full band, and often orchestras of Filipino musicians. Coming from an American colony, these Filipino musicians were heavily influenced by American culture and regularly played jazz music. The voyages were popular with Japanese travellers, many of whom became enamoured by the new style of music they were exposed to, returning home with records they had bought in America and a new found love for jazz.

Jazz records were rapidly shared between musicians and friends, but the first time most Japanese people heard the word jazz was in the lyrics of the 1929 hit song by Sato Chiyako, Tokyo March, which is often considered the first Japanese pop song. The lyrics were the epitome of Japanese modernity, which describes the adoption of aspects of contemporary Western culture in Japan, and lyricist Saijo Yaso described them as a “jazzy satire of the life of the frivolous contemporary city dwellers dancing wildly under an irrationally swelled economy.” The portrayal of glamorous flappers and dandies was part of the beginning of Japan’s long love affair with jazz. “Dancing to jazz, liquor in the wee hours… Shall we see a movie, shall we drink tea, or rather shall we run away on the Odawara Express?” the lyrics ask.

While Osaka is now deemed the birthplace of Japanese jazz and is home to a legion of renowned musicians, Tokyo was actually the epicentre of the dawning of the country’s Jazz Age thanks to the capital’s early exposure to American culture. However, when the Great Kanto Earthquake destroyed more than half of Tokyo in 1923, residents were forced to move out of the city, with most of them moving west to Osaka and Kobe. Soon enough, Osaka was crowned as the country’s jazz capital. Tucked away in the snaking backstreets of the Dōtonbori district, and often referred to as the Japanese jazz mecca, history would be made as Japan’s first jazz café Jazz Kissa Chigusa opened in 1933. The bar was still going until 2007, albeit in a different location – the original came burning down in 1945, thanks to a US bombing mission, but it soon reopened in the rough, port-side streets in Yokohama.

Students and musicians gathered at Chigusa to listen to imported albums that they would otherwise not have been able to obtain. It became a place of musical learning and a refuge of the oppressiveness of post-war Japan. The Japanese government had enforced a ban on dancing post-WWII, but Chigusa customers continued to groove freely. The café was reopened fully after the war, creating a refuge for occupying American soldiers and band musicians who played at nearby US bases. One of the Japanese youths who found solace in Chigusa was pianist and 14-time Grammy nominee Toshiko Akiyoshi. In an article in the Japan Times, she credits Chisuga for her success and access to expensive American vinyl records such as those by Bud Powell, “The only way to learn was to listen to records in those jazz coffee shops.” Unrestrained and spontaneous were uncommon words used to describe Japanese women and were often used to describe Akiyoshi’s ferocious bebop style, which would thrust her into the highly acclaimed International Jazz Hall of Fame in 1999. Also hanging out at Chigusa was trumpeter Fumio Nanri, who Louis Armstrong named the Satchmo of Japan. Nanri made a name for himself and his band, The Hot Peppers, by controversially only playing Dixieland-style jazz. Makino said, “There are countless talented jazz musicians in Japan. It is really difficult to choose a favourite.” But aficionados and locals were left feeling blue after Japan’s first jazz café finally closed its doors in 2007.

When America joined WWII in 1941, jazz music went to war too. Thousands of American troops that were stationed in Japan craved entertainment and were willing to pay for an opportunity to jive to their favourite songs from back home. E. Taylor Atkin’s book Blue Nippon: Authenticating Jazz in Japan (2001) recounts stories of army trucks driving to train stations where Japanese musicians notoriously hung out. Due to high unemployment rates, Japanese musicians would agree to entertain troops at the dance halls. The smooth and snappy rhythms of jazz acted as a bridge between Japan and America.

As a backlash to Americanism, the Japanese government branded American jazz as ‘alien enemy music’ and prohibited citizens from playing it in 1947. This didn’t stop jazz enthusiasts, though, as they carried records in shopping bags on their way to underground listening parties. After the war had ended, Hiromu Nagahara’s song ‘Tokyo Boogie-Woogie’ was frequently played on the radio and would become the anthem of change. The world watched closely as Japan transformed into a progressive, middle-class society.

Where to listen to jazz in Tokyo and Osaka

Today, Osaka and Tokyo continue to host Japan’s most thriving jazz scenes. One of the best places to experience this is the intimate jazz bar Bird/56 in Osaka. Named after the nickname of American jazz saxophonist Charlie Parker, the 56 refers to – in the owner’s opinion – the number of jazz styles that exist. In Tokyo, follow the harmonic sounds of 1960s and 1970s jam vinyl records to discover the dimly lit, smokey Grandfather’s bar. The owner, a DJ himself, is a fanatic jazz enthusiast and vinyl collector who encourages patrons to write song requests on paper napkins. Also in Tokyo, catch the JR Yamanote line for Shinjuku Station and tap your way to a café-bar that has been featured in Haruki Murakami’s 1987 novel Norwegian Wood: Dug Jazz Café and Bar. Don’t miss the black-and-white photographs, taken by the owner himself, of jazz legends such as Miles Davis and John Coltrane walking down the misty, narrow staircase of the bar. Activists and artists would gather at Dug post-war and are said to have planned revolutions with bebop jazz playing in the background.

As the American youth of the 1920s used jazz to rebel against the traditions of their forefathers, jazz was the soundtrack for rebellion and change in Japan.