Everything You Need to Know About Tenjinbashisuji, Japan's Longest Shopping Street

Tenjinbashisuji in Osaka is the longest covered shotengai (shopping street) in Japan. People have come here to shop and socialize for over 300 years, and the bustling atmosphere shows no signs of slowing down. From bargain-hunting to people-watching, fine dining to book browsing, there’s no shortage of things to do and places to see on this incredible street.

The street dates all the way back to the early Edo Period, circa 1653, when a section of the area known today as the famous shopping arcade was a fruits and vegetable market. The area began to thrive due to its proximity to Osaka Tenmangu and it came to function as the pilgrimage site’s omotesando, the main approach to a shrine. Monks, as well as merchants and other locals, would shop here daily in droves and over the years the area attained a monopoly on fruit and vegetable sales in Osaka. By the Meiji Era (1868-1912) the street had officially started to become the one-stop-shopping mecca that it is today. 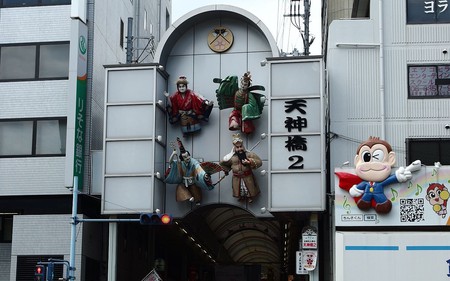 The impressively decorated entrance to Tenjinbashisuji 2-chome, the second section of the massive street. | © Mc681 / WikiCommons

What to see and do in Tenjinbashisuji

Tenjinbashisuji has grown in modern times. That might be an understatement – at 2.7 kilometers and spanning 7 chome (city blocks), it has become the longest covered shopping arcade in the nation. Walking the entire length takes the average person about 40 minutes. Even if visitors don’t buy anything a trip certainly isn’t wasted thanks to the exercise.

It’s also a good spot to people watch. Though shops on Tenjinbashisuji are constantly opening and closing, the majority have been around for decades. Unlike nearby Umeda and other shopping districts in Osaka, Tenjinbashisuji isn’t populated by high-end or brand name stores. Most of the shops are local to Osaka, or at least to Japan, and the owners and shopkeepers have formed an alliance to keep each other in the know about events and tour groups visiting the shotengai. This, combined with the history of the area, makes it a fascinating glimpse into traditional Japanese ways of life and commerce. 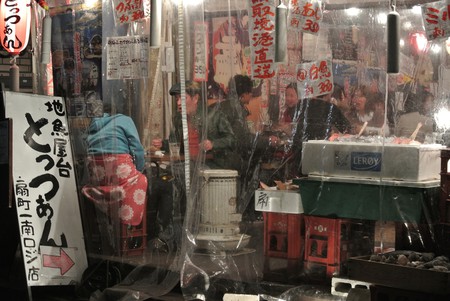 One of the many restaurants in the shotengai. The entrance is covered in plastic to keep customers warm during the winter. | © m-louis .® / Flickr

Tenjinbashisuji has more than transcended its humble origins as a produce market. Today, shoppers can find anything on this street. There are shops selling groceries, books, home appliances, furniture, and clothing, as well as bakeries, cafés, restaurants, bars, and more. You can find karaoke booths, clinics, and used kimono shops right next to each other. Residents of the area probably never leave.

There are also many foreign shops, like Vietnamese restaurants, Thai massage parlors, and places to play mahjong. This is because of the street’s proximity to universities that foreign students attend, as well as neighborhoods where migrants from other Asian countries tend to live.

Also, unlike Umeda and Shinsaibashi, the focus is on bargain shops. Many of the shops that line Tenjinbashisuji offer used and new items like clothing, appliances, and souvenirs at incredibly cheap prices, even as low as just 100 yen (1 USD)! 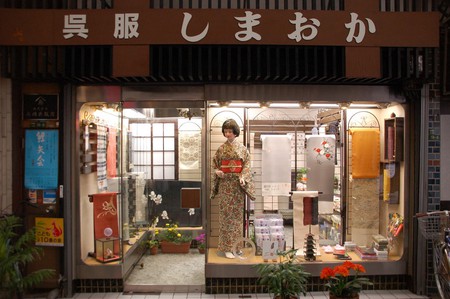 All the above factors mean Tenjinbashisuji tends to draw a more local and eclectic clientele than Osaka’s more modern and high-end shopping areas. Here the atmosphere is generally funky, busy, and upbeat, and the area as a whole conveys a friendly neighborhood feeling that visitors are unlikely to forget.