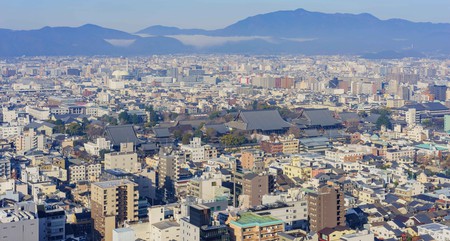 Kyoto has a lively arts scene, with many of its galleries located in the east of the city | © Chon Kit Leong / Alamy Stock Photo

Kyoto is filled with beautiful temples and shrines, but the city’s appreciation for aesthetics doesn’t stop at its historic sights. Kyoto is also home to many of Japan’s most interesting and innovative art galleries. Here, Culture Trip explores some of the old Japanese capital’s best galleries, which exhibit a range of art spanning centuries and genres.

Robert Yellin is an expert on Japanese pottery who has written extensively on the topic. He is also the owner of Robert Yellin Yakimono Gallery, a ceramics gallery in Kyoto that showcases contemporary Japanese artisans.

Yellin has lived in Japan since the mid-1980s, when he first started using Japanese ceramics and came to the realisation that “it was visual poetry”. He wants people to visit Kyoto not just for the typical tourist fare, but to see the work of Japanese artisans, especially in a time when ancient traditions are fading. Yellin remarks, “we want people to come to Kyoto to look at art. You know, you can look at any temple or most buildings as art really; but these types of handmade art forms, the more people look at them, the better for everybody.” He focuses on selling the work of contemporary artists in order to support living artisans and keep old artistic traditions alive. “I could sell antiques all I want, but who does it benefit? Only me. I’ve learned so much from Japan, and I’ve gained so much beauty in my daily life, what can I give back?” Indeed, he’s been successful in spreading the beauty of Japanese culture beyond its borders, sending pieces all over the world. As Yellin says, “that’s to support or spread the gospel of who these people are. That’s what I do”. 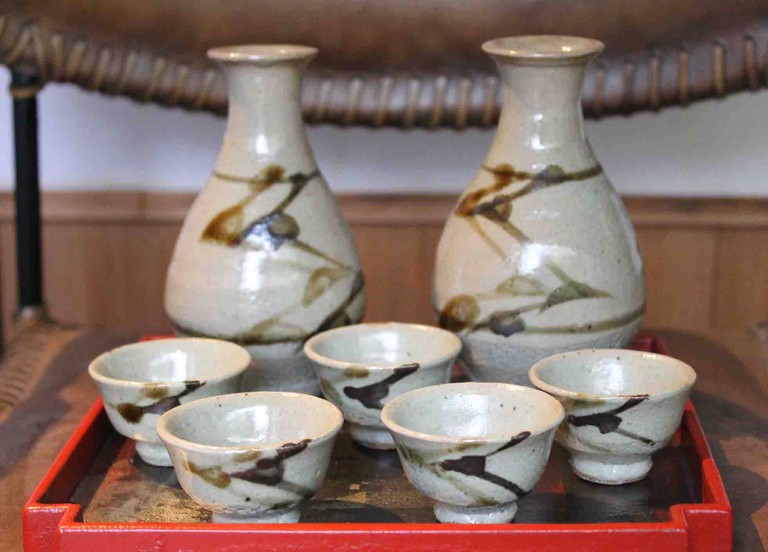 Each of the pieces at Robert Yellin Yakimono Gallery is unique. “There are stories behind every one of these and the person who made them. You can sense their heartbeat,” Yellin says. Although the ceramics on display are stunning enough to be purely decorative objects, Yellin stresses that they are made for practical use as well. “Yonobi is an expression meaning to bring out the beauty by using it. Like that dish right there… it’s a platter, but you put one cherry tomato on it and it becomes still art. So yonobi is to use something because that’s the function of the piece and without using it as its function intended, you’re losing the inherent essence of the work.” Yellin encourages visitors to hold the pieces on display, to feel the textures and contours of the ceramics rather than simply looking at them. “They’re meant to be held, they’re meant to be used… The energy in ceramic art is very vital and the more you hold it the more rooted you become. I want people to [hold the art] and if it breaks, it breaks… it’s just like us, it’s fragile but beautiful… that’s the fate of a piece, just like everybody has their own destiny.” Robert doesn’t keep regular hours; contact him via his website to visit the gallery. 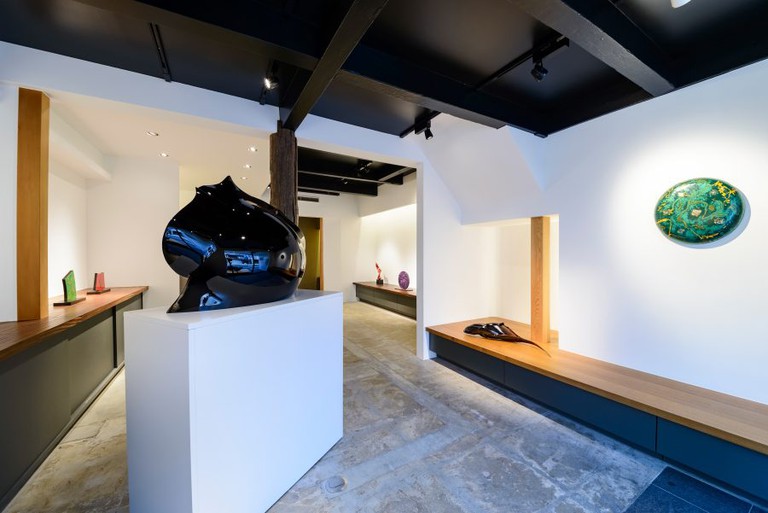 Sokyo is a gallery of contemporary art in Kyoto that displays ceramic pieces and sculpture from the Meiji era to today. The gallery focuses on supporting young artists, aiming to create a community to foster the next generation of artisans and to carve a space in the world of fine arts for ceramicists, especially those who go beyond traditional forms to explore more innovative realms. “[Sokyo] works not only with Japanese but international ceramic artists [who create] radical avant-garde sculptures,” Yellin says. Exhibits change routinely; at the time of writing, the work of abstract ceramic artist Tomomi Tanaka was on display. The gallery participates in international art fairs; in 2020 alone, it has attended both Asia Week New York and ART FAIR TOKYO. Yellin also recommends exploring the neighbourhood surrounding Sokyo, just south of Sanjo Station. “It’s down in the antique district of Shinmonzen and Furumonzen… anyone interested in art should just walk down those parallel streets of the gallery district.” Sokyo has a smaller space, too, called Sokyo Annex, located a short walk from Kyoto Shiyakusho-mae Station. 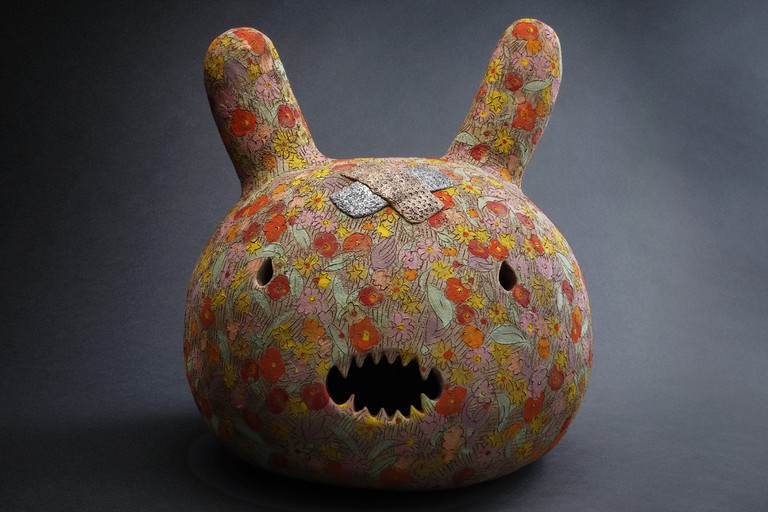 Gallery Utsuwakan exhibits and sells the work of contemporary ceramic artists and is a must-visit for anyone interested in the world of modern Japanese pottery. Yellin recommends a visit to Utsuwakan, saying, “they have lots of more functional work but they do exhibitions of radical artists as well.” The gallery opened in 1984 in an area in the northwest of Kyoto known as Murasakino, about a 20-minute walk from both Kinkaku-ji Temple and Kitano Tenmangu Shrine. The gallery has four floors: the first two are used as commercial space, where you can buy ceramics by Japanese artisans; while the top two floors comprise the gallery, where both solo and group exhibitions are held monthly. 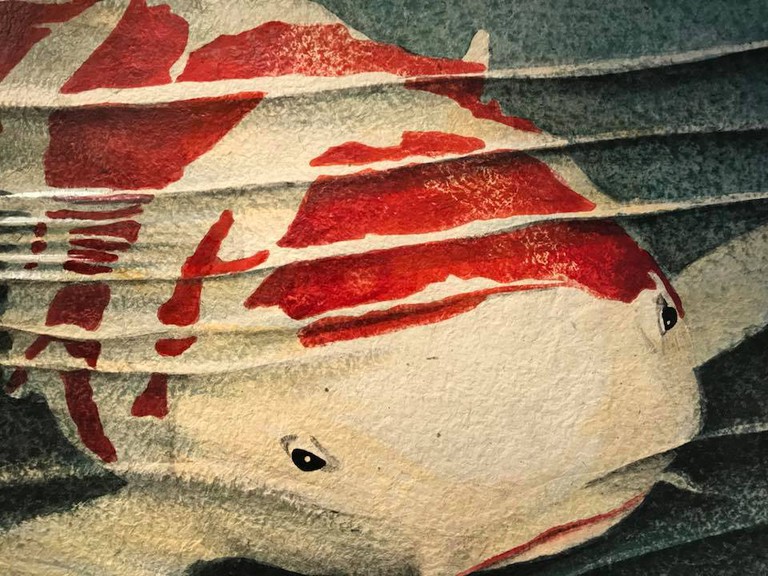 Courtesy of The Kura/MJC Gallery

Containing antiques dating all the way back to the 15th century, The Kura/MJC Gallery appeals to both serious collectors and curious hobbyists. It’s located in the west of Kyoto a 20-minute walk from Kinkaku-ji Temple. The gallery is run by Robert Mangold, an American who became interested in Japanese furniture, art and antiques while working as a carpenter when he first came to Japan in the 1990s. After a great deal of research on the topic, he became one of the most knowledgeable foreign antique dealers in the country. Yellin says, “he deals with anything you can imagine: Japanese armour, Samurai armour, wood sculptures, Buddhist sculptures, glass paintings, hanging scrolls… he’s a true kobijitsusho, an antique dealer.” Book ahead for an appointment; Mangold doesn’t keep regular business hours. You can browse the antiques for sale on Mangold’s regularly updated website, The Kura, named for the huge vaults in which Japanese lords and merchants once kept their treasure. 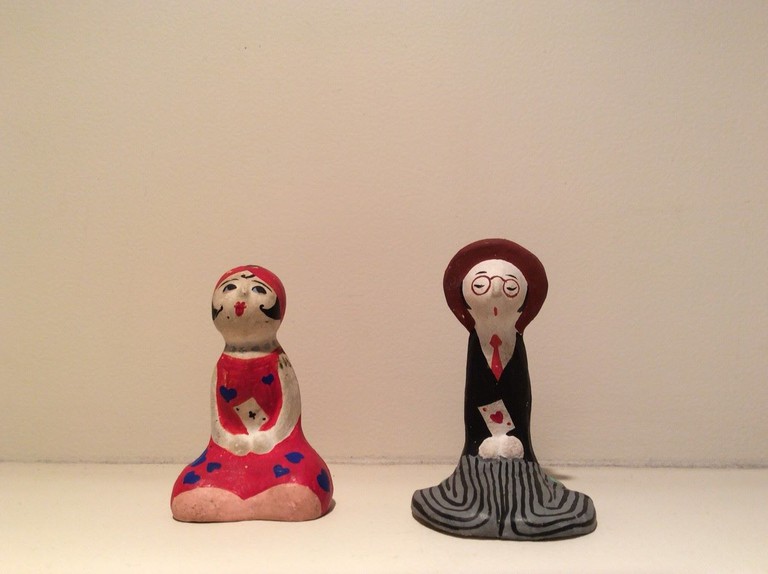 This gallery and shop exhibits Japanese art and artifacts dating from the Meiji and Taisho eras to the beginning of the Showa era – essentially from the end of the 19th century to the mid-20th century. The art displayed here lends the viewer physical evidence of the expansive changes that occurred in Japanese art over the course of the 20th century, when artists were influenced by the West yet managed to retain a particular Japanese aesthetic. Owner Shinya Okunishi’s collection is incredibly diverse, from ink paintings and ceramics to cloisonné and pieces made from lacquer, metal and bamboo. The intimate interior features both a tatami space and an interior garden, adding to the authentic ambience. Of Okunishi, Yellin says, “he’s got a great eye for 20th-century art; it’s a small shop but it’s always full of high-quality art.” 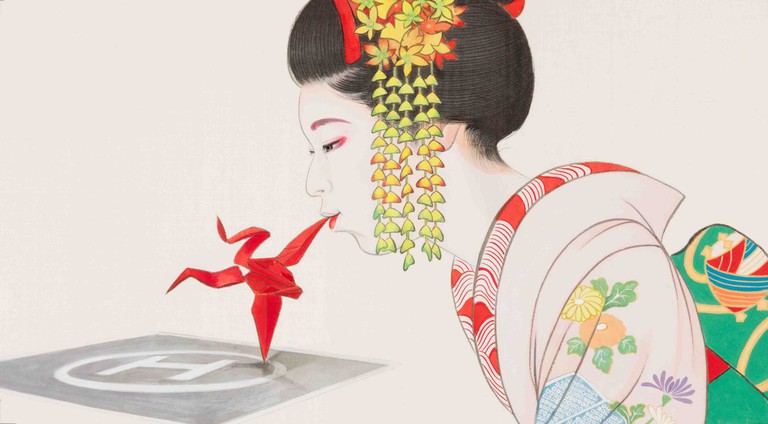 Lip Service | © Kaori Watanabe Courtesy of Imura Art Gallery
Imura is in a stark white, modern building a short walk from Heian Shrine in the Okazaki area of eastern Kyoto. This commercial gallery’s reputation precedes it: Imura has shown work by such famed artists as abstract sculptor Masaomi Raku and photographer Yoshihiro Tatsuki. Opened in 1990 by director Yuzo Imura, this gallery features contemporary art with a focus on new and local artists, particularly those who connect the traditional with the modern. Imura, who is active in Japan’s art scene and has served on the committees of art fairs in both Tokyo and Kyoto, opened the gallery with the aim to expand local knowledge about contemporary art. Exhibits feature a range of mediums, including painting, photography, ceramics and sculpture. Previous collections on display have included the work of artist Masaharu Sato (1973-2019). Sato created unique works by using a digital pen to trace over quotidian scenes from photographs and video. The disconnect between the two mediums offers the viewer a new perspective, challenging the eye’s interpretation of what is real and what is fabricated.
Open In Google Maps
31 Higashimarutachō, Sakyo Ward Kyoto, Kyoto, 606-8395, Japan
+81757617372
Visit Website
Give us feedback 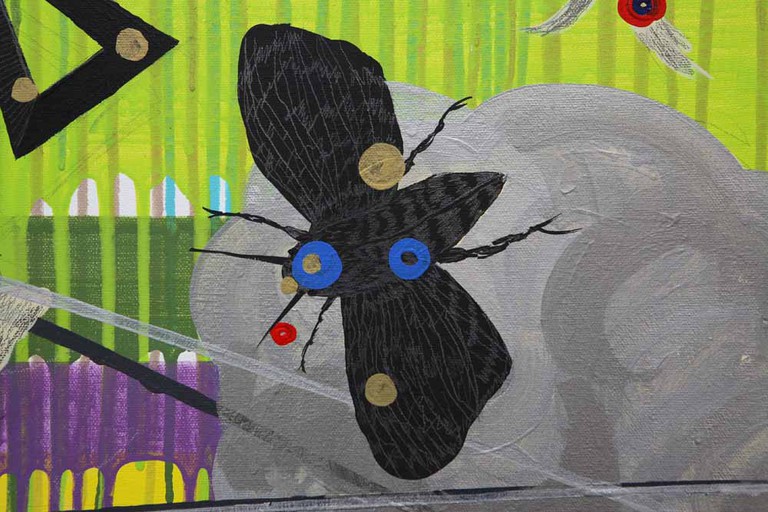 A Stellar Hill 3 | © Reika Nakayama Courtesy of Moriyu Gallery.
This commercial space just 10 minutes from Imura Gallery in Okazaki was opened by Yuichi Mori in 2001. Mori Yu aims to represent artists who possess a singular voice uninfluenced by current trends, and who reference traditional Japanese art in their work while maintaining a contemporary flair. The result is work that is both innovative and timeless. The gallery represents established and emerging artists in a number of mediums, from painting to sculpture. Mori Yu has a permanent collection as well as exhibitions that change throughout the year. Its most recent exhibition was In a Square, an exhibition of Japanese painter Hitoshi Koyanagi’s abstract work that played with the traditional theme of landscape painting by exploring “unnatural nature”. Mori Yu has participated in numerous art fairs, most recently at Art Osaka, Art Nagoya and One Art Taipei in 2019. It has a sister gallery located in 3331 Arts Chiyoda in Tokyo.
Open In Google Maps
4-19 Shōgoin Rengezōchō, Sakyo Ward Kyoto, Kyoto, 606-8357, Japan
+81759505230
Visit Website
Give us feedback 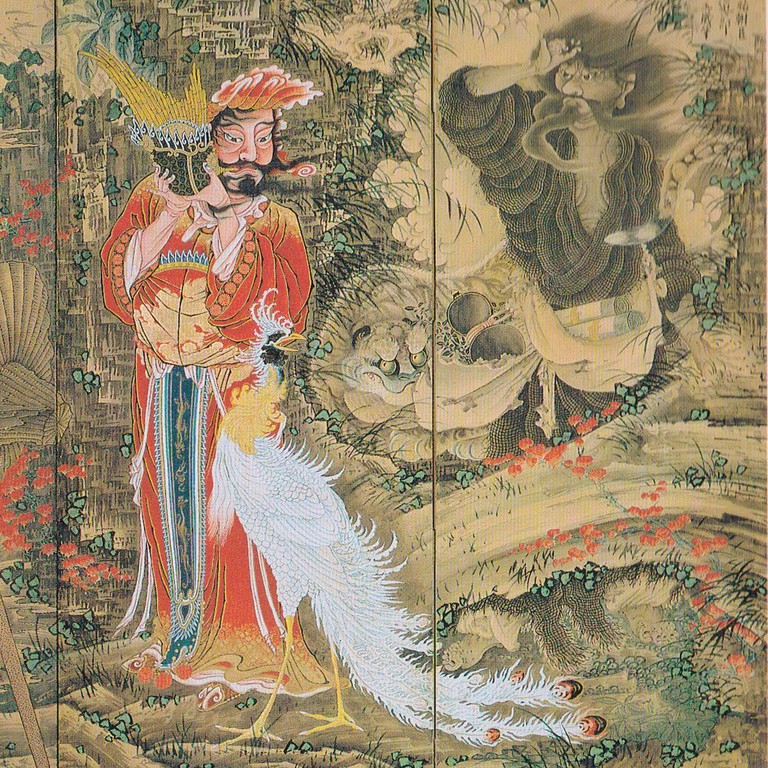 Formerly the Kyoto Municipal Museum of Art, which has been a major public art museum since 1933, the Kyoto City Kyocera Museum of Art is the result of a rebranding scheduled to open in spring 2020. Located in the heart of the Okazaki district, it’s sandwiched between the MoMAK, the Kyoto Zoo and Okazaki Park. The renovated museum will open with an inaugural exhibition comprising an extensive collection of art from Kyoto. It will include a large amount of work from both the museum’s permanent collection and from other museums across Japan, including Nihon-ga (Japanese-style painting), sculpture, calligraphy and crafts. The museum will have a brand new contemporary wing, the Higashiyama Cube; its first exhibit will be Post Vitam, a commemorative exhibition of Japanese photographer Hiroshi Sugimoto, who is internationally acclaimed for his conceptual photography.