An Actual Ninja Squad Is Guarding This Town in Japan 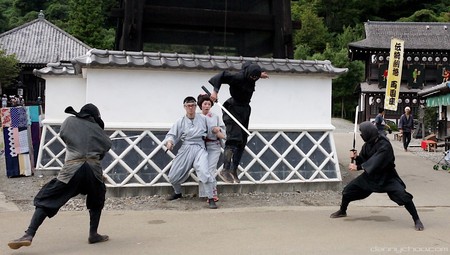 When it comes to enigmatic figures in Japan there are none as famous as the ninja. Originating in feudal-era Japan, the ninja was basically a secret agent whose covert sabotage, infiltration, assassination and guerrilla-style warfare kept the royal families protected from enemy attacks. A security firm in Koka, a rural town in Japan, has reintroduced the concept. They might not be ninjas in the traditional sense, but they’re probably the closest thing we have today.

Koka is in Western Japan, about four hours from Tokyo and an hour and a half from Kyoto. The town gained notoriety as the birthplace of one of Japan’s most prominent ninja schools and is now home to the famous Koka Ninja Village. Due to this unique history, niche ninja tourism has brought visitors and guests here over the years.

In an effort to tap into the craze, in 2016, Koka security agency SCC Co., started having their security guards dress as ninjas while working smaller events, such as serving as traffic control at the opening of a local coffee franchise. From there, the idea took off, and the ninjas have been working steadily since. They’ve become so popular that people even line up to request photos with the guards.

The Koka Ninja House was built in the Genroku (元禄) era of the Edo (江戸) period (1688 to 1704). The house itself is located within a 20-minute walking distance from Konan Station (江南駅) of the JR Kusatsu Line (草津線). #kokaninjavillage #koka #ninjahouse #kokaninjahouse #kokaninja

Maya Miyoshi is the woman behind SCC Co., and the security ninjas. With a background in design, Miyoshi’s unorthodox approach to small-town security was in part inspired by her creative training. As she explained to the Japan Times: “I’ve always liked to do something different. I want to make a change in the security industry, which appears to be old-fashioned and sober.” Miyoshi hopes that her ninja squad can nab a contract to bring their public safety expertise to the 2020 Tokyo Olympic and Paralympic Games.

The Koka guards are decked out in the classic ninja-style uniforms, similar to what you might see in a costume shop. However, historically, ninjas often dressed as civilians, the ultimate undercover camouflage. Less often, they wore clothing similar to a samurai. The black-clad image of the ninja that we think of today is said to have come from artist depictions; the black was meant to portray a sense of invisibility.

For those interested in training like a real ninja, there are still a number of ninjutsu schools in Japan today, where students study a form of martial arts said to be similar to what ninjas once used. Ninjitsu dojos tend to range from gimmicky workshops to more serious martial arts schools. If you’re looking for a bit of fun and want to get a little deeper into the world of the ninja, then be sure to book a trip to Koka.