A Month-by-Month Guide to Okinawa 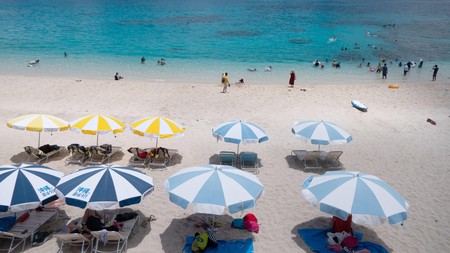 Thanks to its year-round warm weather, Okinawa is a fantastic destination to visit at any time. The best season for you will depend on exactly what you want to do on the island, so here’s a monthly guide to help you choose.

The southernmost prefecture in Japan, Okinawa is a gorgeous island chain home to stunning beaches, abundant marine life and fascinating historical sights from its time as the independent Ryukyu Kingdom. Its main island – also called Okinawa – is where most of the popular attractions are located, however there are also numerous smaller and more remote islands you can explore.

Although often considered a summer destination, Okinawa’s subtropical climate means a trip here is worth taking any month of the year. As with the rest of Japan, each season brings its own special highlights and activities. Here, Culture Trip sets out what you can expect from each month, so you can decide exactly when to visit this pristine paradise.

The winter season in Okinawa is one of the quieter times to visit, and tourists benefit from smaller crowds and lower prices. The mild and mostly dry weather brings temperatures of around 15-20C, so you can enjoy some time at the beach even if it’s not quite hot enough for sunbathing.

The climate also means that Japan’s famous cherry blossom season arrives earlier in Okinawa than on the mainland. Here, the sakura (cherry blossom) generally bloom between mid-January and mid-February, and several hanami (flower-viewing) festivals take place across the island during this time. Many of the cherry trees in Okinawa are of the kanhizakura variety, which bloom a deeper shade of pink than many species elsewhere in the country, giving the season a special Okinawan twist. 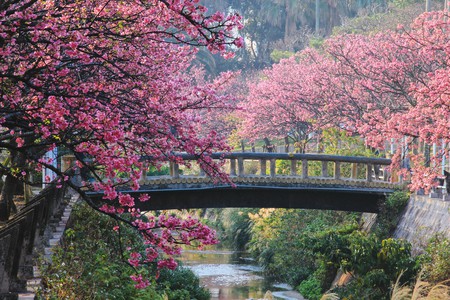 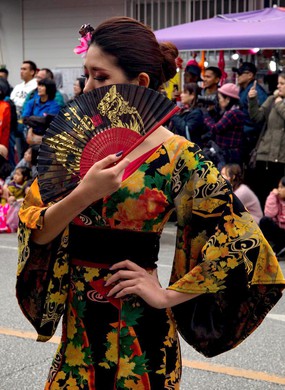 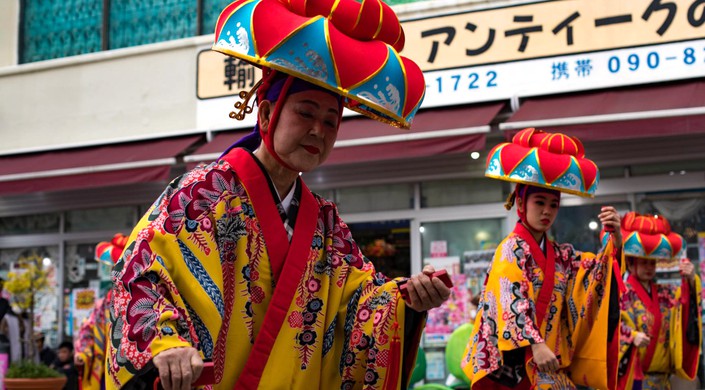 Another major event during this time is the New Year holiday, with lots of domestic travel and closure of shops, restaurants and other attractions at the beginning of January. If you travel at this time, don’t miss the celebrations at Shuri Castle. This traditional three-day event features music and dance performances showcasing Okinawa’s unique history and culture.

While all the usual tourist attractions remain open during the winter, there’s one activity you can only do during this season: whale watching. Humpback whales migrate across the Pacific Ocean to Okinawa’s warmer waters to breed, and daily boat tours run to the nearby Kerama Islands, where you have the best chance of spotting these majestic mammals up close.

As winter fades into spring, temperatures rise and the beach season in Okinawa officially begins. April is one of the most pleasant months for sightseeing, as the temperature reaches around 25C without too much humidity. It’s also when the spectacular Ryukyu Kaiensai fireworks display takes place in Ginowan. This festival combines music with thousands of breathtaking fireworks to light up the night sky in an event you’ll never forget.

In May the annual Naha Dragon Boat Race, known as the hari, captivates audiences with competitions between narrow, elaborately decorated Okinawan boats. As well as Naha, hari take place in other cities and islands across the prefecture, and are held to pray for safety at sea. There’s a short rainy season from early May to early June, when temperatures and humidity also increase. The end of June can be a great time for scuba diving and other water sports, after the sea gets warmer but before the influx of summer tourists. 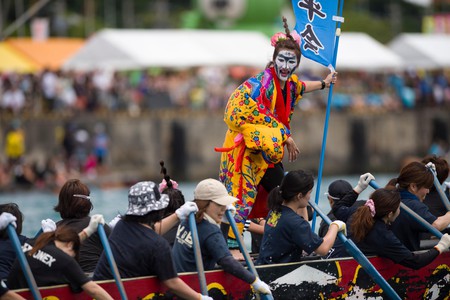 If possible, it’s best to avoid travelling during Japan’s Golden Week, which runs from the end of April to early May. This series of consecutive national holidays sees domestic travel (and prices) jump astronomically.

The summer in Okinawa is the hottest time of year, with temperatures pushing as high as 35C. Naturally, this is the peak time for visitors, and attractions can get crowded. This is particularly true during the Obon holiday in August, when lots of Japanese travel. The glorious weather makes it the best time of year for hitting the beach – head out to one of the lesser-frequented islands in the prefecture to find a more secluded spot. 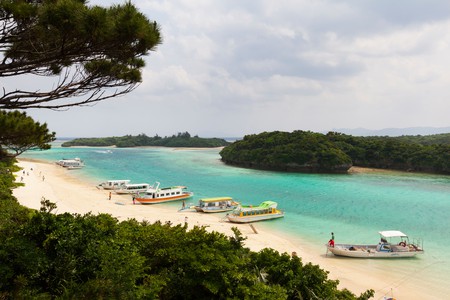 Summer time is festival time in Japan, and Okinawa is no different. One of the largest celebrations is the Eisa dance festival in August. Eisa is a traditional Okinawan performing art, and during the festival 10,000 dancers come together to honour the spirits of their ancestors. They parade through the streets, dancing dynamically in authentic costumes, and accompanied by taiko (drums) and sanshin (stringed instruments) in one of the island’s liveliest displays. 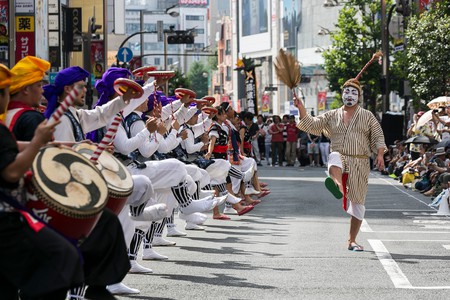 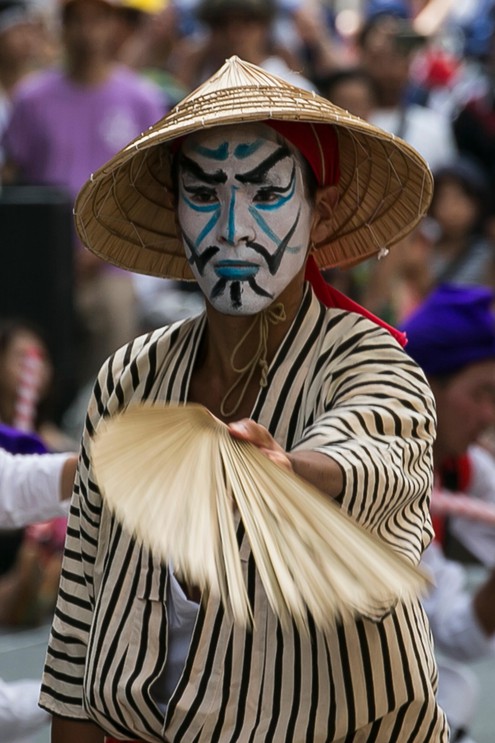 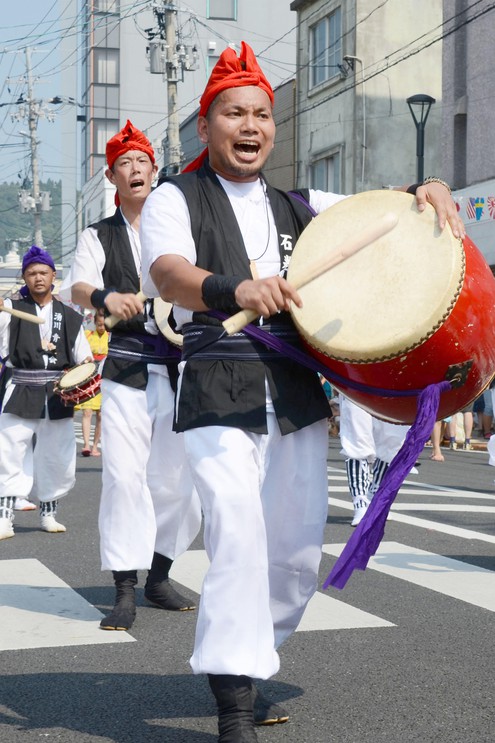 The warm sea temperatures Okinawa experiences in the summer also make it an amazing time to get out in the water, whether that’s scuba diving, snorkelling, paddle boarding, surfing, or any of the other water sports on offer. Be aware that this is also typhoon season though, which can occasionally wreak havoc with travel plans.

As summer blends into autumn, we approach another of the best times to visit Okinawa. The peak season ends, bringing tourist numbers down, but the weather remains pleasantly warm (between 20-25C) and less humid. As the end of the year approaches the weather gets cooler and the island quieter, with the exception of the busy New Year holiday period. It’s still possible to dive and snorkel at this time of year. Though the water won’t be as warm as in the summer months, the crystal-clear waters mean there’s plenty of marine life to admire.

The Shuri Castle Festival – one of Naha’s biggest and most impressive – takes place at the end of October. It celebrates the legacy of the Ryukyu kings of old through a procession in full period costume, plus music, dancing and other cultural performances. After dark, the castle park is beautifully illuminated with hundreds of candles. And this isn’t the only light-up event taking place. End-of-year illuminations are common across Okinawa (and mainland Japan) from late November. Some of the highlights include those at the Southeast Botanical Gardens, Itoman City’s Lights of Peace, the Ryukyu Lantern Festival and Kanucha Resort’s Stardust Fantasia in Nago city. 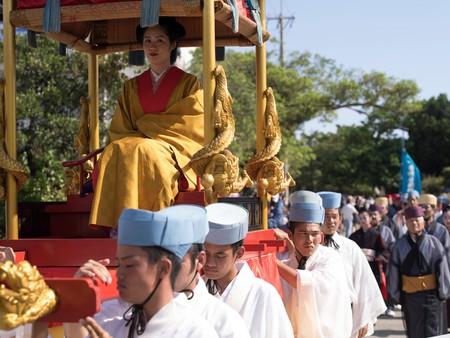