A Guide to Visiting Japan's Glass Beach in Nagasaki 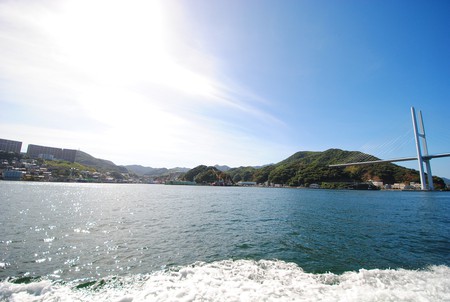 This beach is covered in recycled glass | © alexxis / Flickr

Last year the stunning Ishigaki coast was awarded one of Trip Advisor’s best places to visit in 2018. However, if travelling through Japan teaches you anything, it’s that for every historical site and naturally stunning corner of the country, there’s also a wonderfully strange and unique discovery. The medium sized Japanese city of Nagasaki is home to one of these sites: a beach covered in glass. Here’s how it was made, and how to get there.

Unlike the crystal clear waters of Okinawa, or the party-loving shores of Enoshima, this beach’s greatest deterrent is also its main attraction. Located in Omura City, on the southwestern corner of Japan, this obscure beach is so far off the map that it doesn’t actually have a name; however, when the sun hits it just right, it sparkles unlike any other beach you’ve ever seen. That’s because this beach is covered in glass.

In a previous life, the beach was little more than rocky terrain, uninviting and visually unappealing. During the long damp, sweltering summer months, the wet rocks grew a layer of algae that would carpet the area in a funky, repugnant odor bad enough to scare away visitors. The locals decided that Mother Nature wasn’t doing the best job, so they decided to take matters into their own hands. They removed the rocks and covered the area in small pebbles of recycled glass to prevent the algae from returning.

Looking down from Morizono Park, this glass beach looks like any other beach at first, but upon closer inspection, the thousands of pieces of rounded glass catch the light and mesmerise onlookers. Going down for a closer look is possible since the recycled glass has been smoothed and is perfectly safe to walk on.

This is actually not the world’s first glass-sand beach. There are a few glass beaches across the globe, arguably the most famous being California’s glass beach. 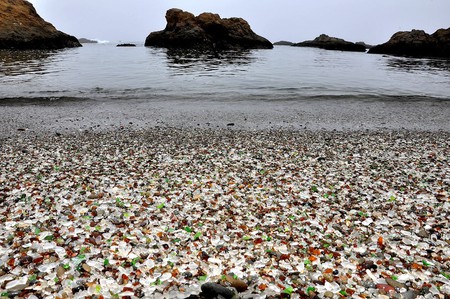 What can you do at Glass Beach?

Although swimming in the bay is currently not allowed, it’s been attracting a lot of attention with more adventurous travellers, beachgoers and Instagrammers alike. Located not far from Nagasaki Airport, this beach is a wonderful unconventional tourist hangout that is well worth a visit before the hordes of tourists begin to descend on the area. Go picnicking or sightseeing or dabble in the world of nature photography; this beach is a great place to spend an afternoon.

Although Omura is a rather humble city, there’s also enough to see and do in and around the area that makes it worth visiting. The city was built around Kushima Castle, which sits on a peninsula jutting out onto Omura Bay. If you’re an architecture buff or want to see what the area looked like during a previous age, head to Old En’yu-ji Garden, which looks like it hasn’t been touched since the Edo period (1603-1868).

Forty minutes south, you’ll find Nagasaki city, the second city to be hit by the brutal atomic bombs of WWII, and one of Japan’s major port cities. It is culturally diverse and historically fascinating, but one of the most unique places to explore is Gunkanjima (Hashima Island), a coal-mine town and island located about 20 kilometres (12.4 miles) from Nagasaki Port. Until 1974 the island was one of the most densely populated corners of the Earth with more than 83,000 people per square kilometer (216,000 people per square mile) on record. It’s now deserted, but you can schedule a tour during your visit.

How to get to Omura

From Tokyo the best way to get to the area is to catch the JR Tokaido/Sanyo Shinkansen from Tokyo Station to Hakata Station in Fukuoka. The trip takes five hours and costs 22,950 yen ($210/£156) each way.