The Weirdest and Most Wonderful Baseball Mascots in Japan 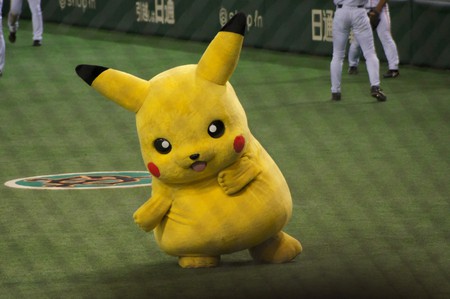 Though not a baseball mascot, Pikachu has been known to show up at games | © Shiori.k / Flickr

Japan has a great love for mascots, ranging from the cute to the bizarre, so it’s no surprise that it would extend to baseball as well. Here’s the story behind some of Japan’s weirdest and most whimsical baseball mascots.

The Hiroshima Toyo Carp have two official mascots, Carp Boya who is based on the team’s original logo, and SLYLY who is… well, no one is quite sure what he is exactly. This playful greenish-blue mascot first appeared on the scene in 1995. SLYLY was designed by Acme Mascots, Inc., a division of Jim Henson’s puppet company, hence the giant Sesame Street muppet vibe. Acme Mascots is also the same design company that created the Philly Phanatic, hence the similarities between the two.

When the team runs up a high score or is on a winning streak, SLYLY transforms into ‘Happy SLYLY’ and turns from green-blue to pink.

While two out of three of the Chunichi Dragons mascots make sense — Shaolon, the blue dragon, and Paolon, the pink dragon — you may wonder why the Dragons’ third mascot is a back-flipping blue marsupial.

Doala the Koala was added as a team mascot after koalas first arrived at the Nagoya Zoo in 1984. The goofy Doala won over fans with his bad dancing and awkward back-flips and even released a book titled Doala’s Secrets in 2008.

Although he didn’t start as a Tohoku Rakuten Golden Eagles team mascot, Mr. Black Eagle gained popularity for his deadpan expression as much as for the life-sized black eagle perched atop his head. The solemn 51-year-old fan could be regularly spotted around the stadium and before long went viral, so Rakuten decided to make him an official mascot on so-called ‘Black Eagle’ days. Mr. Black Eagle sports the jersey number ‘9604’, which in Japanese reads ‘ku-ro-wa-shi’, or ‘black eagle’.

The official mascot of the Fukuoka Softbank Hawks is, naturally, a family of hawks. They’re the largest number of mascots for any one team in the NPB, which is weird when you really think about it because hawks are solitary creatures rather than flocking birds. But one recent addition to the squad is Oto-san, a.k.a. ‘Father’, the talking white shiba dog from team owner Softbank’s television commercials. Although not technically a mascot, Oto-san has been declared the Hawks’ official cheerleader. His jersey number is ‘0103’, or ‘o-to-san’ in Japanese.