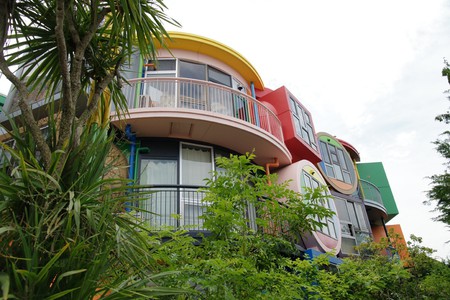 Tokyo is a fascinating city, jam-packed with amazing buildings. From unconventional buildings to tourist meccas, there’s plenty to uncover about Japan’s architectural history. Whether you’re an architecture geek or are trying to Google an escape route from the pits of Shinjuku Station, here are a few fun facts about Tokyo’s buildings.

Tokyo SkyTree is the tallest structure in Japan

Located by the tourist mecca of Asakusa, this restaurant, observation tower, and broadcast station is also the tallest official tower in the world. After the Burj Khalifa skyscraper in Dubai, it’s the second tallest structure in the world. It stands at 634 meters (2,080 ft) tall and is one of the city’s most popular tourist destinations. If you’re planning on scaling the tower, but are nervous about earthquakes, don’t be! The tower’s designers built it to withstand earthquake tremors.

Tokyo Tower is Japan’s attempt at the Eiffel Tower

Another popular tourist tower in Tokyo is the bright orange Tokyo Tower located just around the corner from Roppongi. For many visitors, this communications and observation tower inspires a feeling of deja-vu; that’s because it’s a little bit of a copy. The tower looks a lot like Paris’ Eiffel Tower and it was inspired by the French original. Though it has received complaints over the years, one interesting advantage Tokyo Tower has is that viewers can take a photo of it without violating copyright laws, as with the lit-up Eiffel Tower. Tokyo Tower is free to photograph for all.

Known as hatsumode, this shrine is very important in Japanese culture, and visiting it or another shrine during the first few hours or days of the New Year is a critical activity on the Japanese calendar. This is when locals pray for good luck and fortune in the upcoming 12 months. During this time, many of Tokyo’s shrines are swarming with citizens praying for a good year, but none of them are as packed as Meiji Jingu Shrine located in Harajuku. It sees an estimated 3.2 million visitors during this time every single year.

The “Metabolism” architecture movement was inspired by biology

Today in Tokyo you’ll see a number of sci-fi looking structures that are reminiscent of a post war architecture movement called Metabolism. In the most simple of scientific definitions, metabolism is the process of maintaining living cells. Many Tokyo architects, as well as architects throughout Japan, believed that buildings should be able to change and evolve over time, much like living things. On the whole, the concept failed, but there are still buildings that remain, including Nakagin Capsule Tower and the Hillside Terrace.

Nakagin Capsule Tower was built to have replaceable rooms

Nakagin Capsule Tower is arguably the most iconic building of the Metabolism movement. An apartment complex originally designed for single businessmen, Nakagin Capsule’s rooms featured a very basic set up with a built-in shower, bed, TV, and phone. Looking like a weird stack of jumbled blocks stacked on top of one another, each room was designed to be easily replaced every 25 years or so. They never got replaced though, and over the years, the building has fallen into a sad state of neglect and disrepair.

Another screenshot from the feature documentary "G. J. Ramstedtin maailma". This one is from inside the Nakagin Capsule Tower, built by the Metabolist architecture movement and featured from the outside in "The Wolverine". Much more interesting on the inside! #docpoint #docpoint2018

Roppongi Hills is said to be cursed

The curse of Roppongi Hills is somewhat of an urban legend; one that has reestablished its reputation in recent years. Firstly, the area’s address features three sixes. The building also stands over the soil where some of the 47 rōnin (the leaderless samurai) committed ritual suicide. Over the years, a number of the residents of Roppongi Hills have fallen victim to its supposed “curse,” including actors, businessmen, and company founders, who have risen to fame only to fall quickly into disgrace. These people are commonly referred to as the “Hills-zoku“ (Hills tribe). In 2004 a six-year-old boy died in the building after his head was crushed by revolving doors. The doors had injured two others during the prior year. Needless to say, if you visit Roppongi Hills, keep your wits about you.

Most houses are built to be earthquake proof

Because of Japan’s positioning on the globe, it’s rather partial to reoccurring tremors, as well as more devastating earthquakes. To prevent further devastation, most buildings here are built to withstand earthquakes. In fact, the collapse ratio of buildings in Japan, even against a powerful earthquake, is actually rather low.

Shinjuku Station is officially the busiest station in the world

If you’ve ever visited Tokyo, there’s a very high chance that you’ve lost a few hours trying to escape the architectural labyrinth that is Shinjuku Station. Don’t worry, even locals get lost regularly, and that’s because it’s officially the busiest station in the world. Estimates say that the station services around 3.5 million passengers per day, but it could quite easily be more.

On the east bank of the Sumida River sits the headquarters of the Asahi Breweries. Although Asahi is one of Japan’s most popular beers, the building itself is not really famous for the lager’s legacy. It’s arguably more famous for the poop-like sculpture sitting on top of the building. Sorry to disappoint, but the sculpture was supposedly meant to resemble foam rising from a beer mug. In Japan though, golden poop is said to be a bit of a lucky charm, and as a result, the Asahi HQ site has been given the name unchi biru by locals, a.k.a. “poop building.”