7 of the Weirdest Video Games from Japan 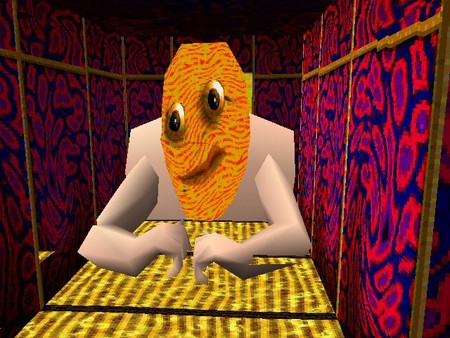 Japan‘s penchant for all things weird and wonderful is well known, not least when it comes to video games. Here are some of the most lunatic slices of computer entertainment coming out of the country.

If you’ve ever spent countless hours awake at night, wondering exactly what it must be like to be a mosquito, then this PlayStation 2 title has you covered. It’s like Metal Gear but with disease-carrying parasites, as you assume the mantle of said insect and infiltrate a family home in order to drink blood from a victim without getting spotted. Should that occur, they will fly into apoplexy and endeavour to swat the living shit out of you. The game (simply titled Ka, or ‘mosquito’, in Japan) may sound like drivel, but it was successful enough to get a sequel, which sadly never saw a release outside of its home country. It definitely didn’t suck.

In Japan, using recreational drugs carries immense stigma, thereby creating a niche for any enterprising soul wanting to create an experience which mimics being off your tits only without having to worry about arrest, imprisonment and subsequent never-ending public shame. Step forward Asmik Ace Entertainment, who made a title for the original PlayStation in which you explore a series of first-person environments intended to make you feel like you are well and truly tripping balls. Allegedly based on the dream diaries of AAE artist Hiroko Nishikawa, the game has no real objective other than wondering around being confused. The band alt-J used an image from it for the cover of their 2017 album Relaxer, a listening experience which no amount of ingested substances could ever make tolerable.

Speaking of hallucinating – no you’re not, that really is the late, great Leonard Nimoy lending his sonorous tones to this 1999 classic for the Dreamcast. A glorified pet simulator, the player is responsible for the ongoing care of a bizarre fish-man hybrid that is controlled via a microphone that came bundled with the game. The game was the brainchild of legendary esoteric game developer Yoot Saito, whose most recent work was an airport management simulator for the Nintendo 3DS. The game enjoys a cult following even to this day, and while the Dreamcast was Sega’s console swan song, Seaman’s success went swimmingly, so much so that it got a sequel on the PlayStation 2 in 2007.

If you’re sick of your family’s bullshit but don’t want wreck your home OR post snarky status updates on Facebook, then vent your frustration with this, surely one of the most magnificent arcade games ever devised. Pound your hands on top of a table and then watch with delight as households objects are obliterated and family members are mute with shock at your red-faced fury. Enjoy different scenarios (Frustrated bride! Disgruntled salaryman!) and be sure to time your strop perfectly so that you can max that high score. The sequel, Cho Chabudai Gaeshi 2, includes a level where the ghost of a dead man overturns the coffin at his own funeral, with the body still inside. It also has multiplayer!

The concept of bird-watching is taken to dramatic new heights in this dating sim, in which the player is a teenager tasked with meeting and wooing amorous avians at a high school for birds (the feathered kind, obviously). The setting is St PiegonNation (“This is Japan’s–no, the world’s, greatest gathering place for gifted birds.”) and hearts are aflutter as you, the only human student, cross paths with fair feathered friends looking for love. It’s up to you to find a love nest, or even just wet your beak, by fair means or fowl (even if you have to wing it). Will your romance take flight or will you be simply be grounded instead? Either way, this game is a real hoot.

Next time someone tells you the Wii was just for children and old people, then kindly direct them to this beefy, well-oiled slice of macho mayhem released in 2010. A precious stash of bodybuilder protein has been stolen by a dastardly thief, and the player must give chase using the Wii remote to control some hyper-buff dudes and the occasional anthropomorphic animal. What ensures is a game of hot pursuit with homoerotic overtones so gloriously strong that they make The Village People look like Slayer. The trailer alone is a thing of joy and wonder to behold. When Nintendo shuts down its Wiiware service in the near future, this game will be one of the biggest casualties.