7 Japanese Anime That Are Actually Based on Myths and Legends 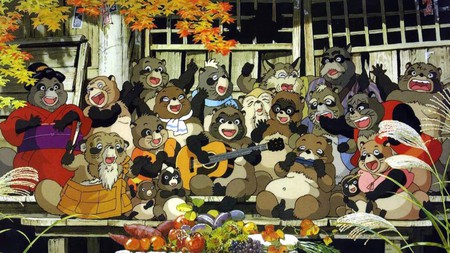 Anime is a medium that frequently delves into the fantastical, but some of its stories are based on long-established myths and legends. Here are a few of the finest examples.

Musashi – The Dream of The Last Samurai

In Japan, Miyamoto Musashi is a name as familiar as King Arthur is to Brits. Musashi was a legendary 17th-century swordsman, writer, artist and poet, the quintessential warrior-philosopher. In this feature (written by Ghost In The Shell director Mamoru Oshii), the viewer is taken on a fascinating tour of his life, from his mysterious origins to his death in 1645. Part history lesson, part action spectacular and part post-modern documentary, we discover all manner of fascinating tidbits about Musashi (he once defeated an enemy by insisting on duelling in winter and intentionally arriving late, so that his opponent effectively froze to death) while enjoying the lavish production values of renowned studio Production I.G.

The Tale of The Princess Kaguya

Studio Ghibli pushed its exquisite artistry to the limit in this spin on a well-known Japanese folk tale. A kindly, elderly couple discover a tiny baby inside the stalk of a bamboo plant. She is raised with love and grows into a beautiful, precocious young woman, but her search for identity becomes fraught with tension when she is courted by suitors and her origins threaten to catch up with her. One of the most underrated films made by the legendary studio, it’s a visual spectacular that looks like a painting come to life. A large box of tissues will be needed for the film’s tear-jerking denouement.

Anyone who loves horror anthologies will take to this like cats to cream. Yamishibai is a collection of ghost stories based on myths and urban legends of Japanese origin. The show’s format is based on the traditional kamishibai method of Japanese storytelling, where paper figures are used to play out the action. Even the show’s intro is creepy, as a masked man arrives at a children’s playground to tell the young ones selected tales of terror. All the typical Japanese horror tropes – long dark hair, ancient curses, haunted objects, beleaguered salarymen – can be found in abundance. The show debuted in Japan in 2013 and was a big hit with audiences, so much so that it finished its fifth season last year.

An amusing spin on The Da Vinci Code, Vatican Miracle Examiner centres around a secret society based in the Roman city-state that travels the world investigating urban legends and religious phenomena. When a young nun in Mexico gives birth via an apparently immaculate conception, the team is sent in only to uncover a labyrinthine web of deceit involving, among other things, Satanic cults and the Third Reich. One of the few Japanese animations in which Catholic angst acts as a propulsive narrative device, it’s an enjoyably pulpy mixture of detective story and God-bothering hokum.

Japanese tanuki are creatures with a history immersed in the country’s folklore. Once upon a time, so legend has it, they were supernatural beings able to change their form and even sing songs. Wander round present-day Japan for long enough, and you’ll easily spot tanuki statues at homes and businesses, and the creature even pops in Super Mario games. This film, another Studio Ghibli classic, plays on the legend by telling the tale of tanuki whose dwellings are threatened by urban development, and who must team up to save their homes. Plenty of comedy ensues as the creatures bicker among themselves while attempting to rediscover their magical abilities. Think Fantastic Mr. Fox but with more shape-shifting and Japanese familial politics.

Mermaids are popular mythological figures who have popped up in everything from classic family films to a Polish horror musical. Japan has its own take on mermaid lore with the Yao Bikuni, a fish-like creature whose flesh can grant near-immortality if eaten. Manga auteur Rumiko Takahashi created a manga based on this legend that was later adapted into an anime. Considerably darker than her other works like Ranma 1 1/2 or Maison Ikkoku, the show’s abiding message seems to be crossing paths with a mermaid isn’t something you should ever wish for.

This series does exactly what it says on the tin. Each episode of the show tells either two or three separate tales based on popular Japanese folk tales. Veteran film actors from Japanese cinema provide the voices each week, giving the show spiritual kinship with beloved BBC kids program Jackanory. The show’s simple, charming animation makes it ideal family viewing, and it proved so popular with viewers that it notched up an impressive 258 episodes before finishing its run last year. Western anime fans can catch it on Crunchyroll.