10 Historical Landmarks to See in Kyoto

Historical Landmarks of Kyoto| © LizardJedi Flickr
Kyoto is an ancient city that is rich in both history and culture. From temples and shrines to castles and palaces, we take a look at 10 landmarks in Kyoto that are must see attractions due to their historical significance.

Nijo Castle is a UNESCO World Heritage Site that was once the official Kyoto residence of the Tokugawa Shogunate, who ruled Japan during the Edo Period (1603-1868). The castle’s main tower burned down in the 18th century, but the castle’s Ninomaru Palace is worth the visit alone to see the might and power of the former shoguns. The Palace features exquisite interiors such as paintings on ornate sliding paper doors, gold leaf covered rooms, elegant ceilings and the pièce de résistance, ninja proof chirping nightingale floors. 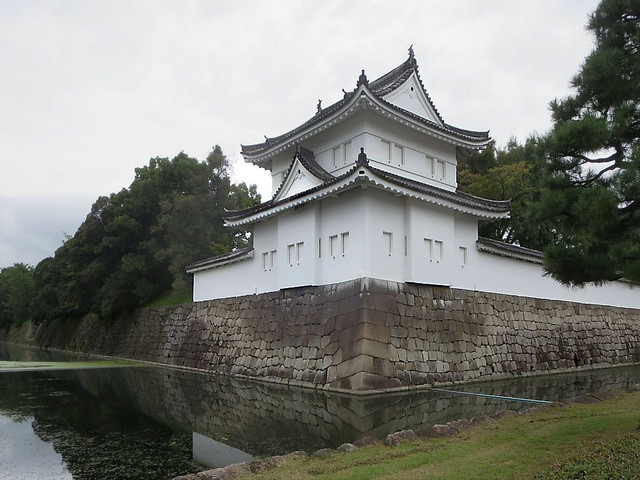 Shrine
Walk through the red torii gates at Fushimi Inari-Taisha Shrine | © Dr_Flash / Shutterstock
Fushimi Inari Taisha is Kyoto’s most important shrine and is dedicated to the Shinto god of rice. Founded in 711, it is one of the most impressive and memorable sites in all of Japan, known for its thousands of vermilion torii shrine gates. The surreal world of shrines and torii shrine gates wind their way up Mount Inari from the base of the mountain and main shrine buildings. The Romon Gate at the shrine’s entrance was donated in 1589 by the samurai warlord, Toyotomi Hideyoshi.
More Info
Open In Google Maps
68番地 Fukakusa Yabunouchichō, Fushimi Ward Kyoto, Kyoto, 612-0882, Japan
+81756417331
Visit website

The Kyoto Imperial Palace is the former residence of the Emperor and the Imperial family of Japan before the move was made to the Tokyo Imperial Palace during the Meiji Restoration in 1869. The palace grounds are open to the public and feature several beautiful buildings built in the classical Japanese style. The original palace was built in 794 with the present Imperial Palace constructed in 1855; it still acts as an important place for official state ceremonies and enthronements. 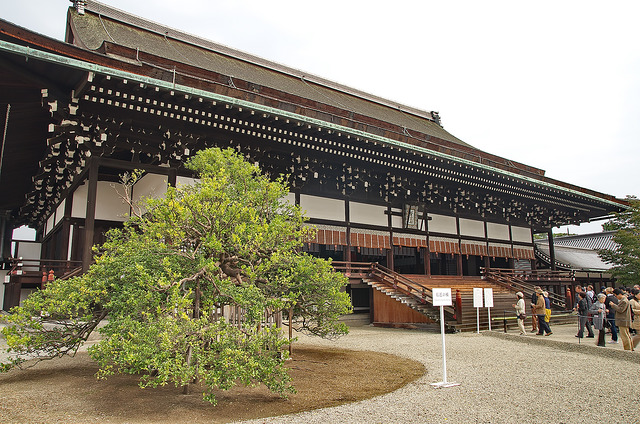 Kinkaku-ji Temple, known as the ‘Golden Pavilion’ is one of the symbols of Kyoto and its most famous attraction. It was originally built in 1397 as a retirement villa for the Shogun and later converted into a Zen Buddhist temple. The magnificent temple’s top two floors are completely covered in brilliant gold leaf making it very picturesque against a lush green background. 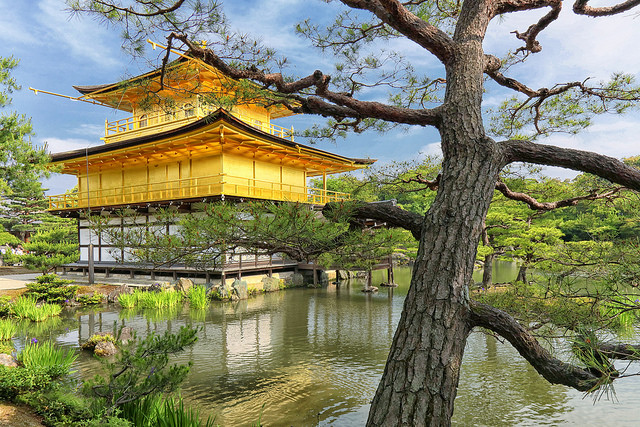 Kiyomizu-dera Temple is one of the most celebrated temples in Japan, and the city’s greatest World Heritage Site. The ancient temple was founded in 780 and is dedicated to Kannon, the Buddhist Goddess of Mercy. Its biggest attraction is the main hall, which is built on a mountain slope with a wooden framed balcony perched out over the cliff offering spectacular sweeping views of Kyoto. The balcony was built without the use of nails, highlighting the amazing craftsmanship and skill of traditional Japanese carpentry techniques. 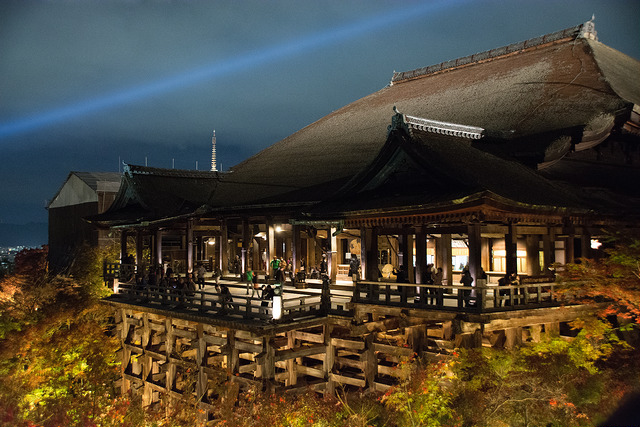 To-ji Temple is a large ancient Buddhist temple complex boasting a history of over 1,200 years. Originally established as one of the guardian temples of Kyoto, it is famous for its five-story pagoda, which is the highest in Japan at 57 meters in height. 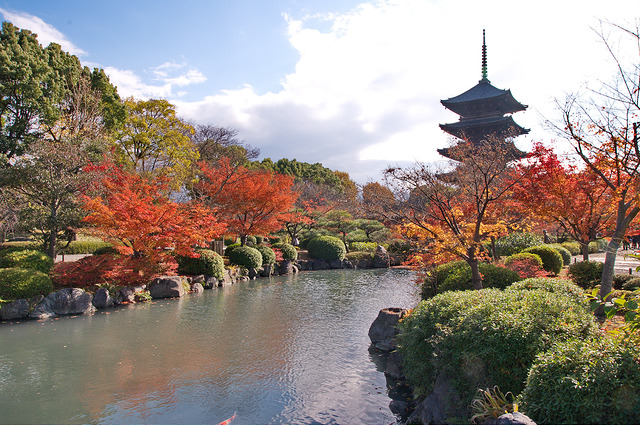 Enryaku-ji Temple is a monastery located on Mount Hiei which overlooks Kyoto. It was founded during the Heian Period in 788 and is one of the most important monasteries in Japanese history. Many of Japan’s most influential monks studied here before going off to found some important Buddhist sects. The complex features an entire world of temples and sub-temples all set in an ancient forest. 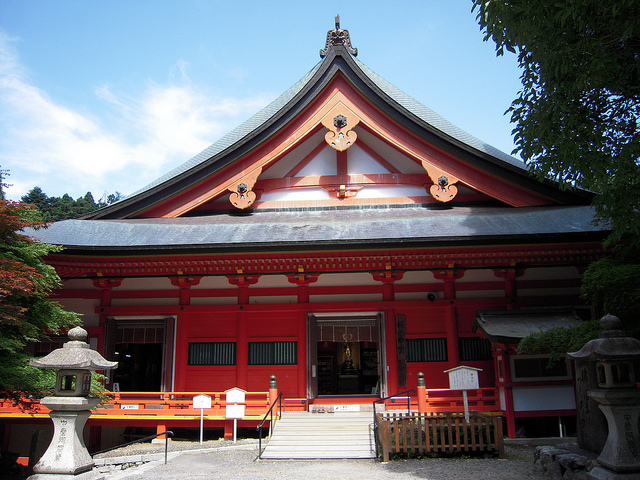 Ninna-ji Temple is a UNESCO World Heritage Site located in western Kyoto. The sprawling temple complex was founded in 888 by the retired Emperor Uda and features a five storey pagoda as well as gorgeous temple buildings. 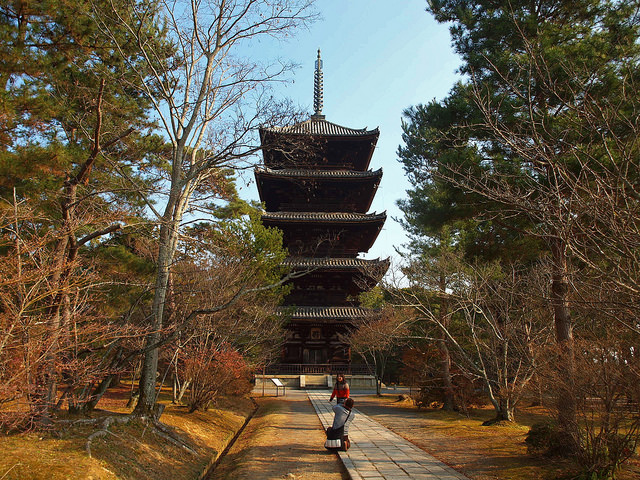 Nanzen-ji Temple is a sprawling Zen Buddhist temple surrounded by lush green hills. It is famous for its large brick aqueduct which stands in the temple complex and looks like an ancient roman ruin. The aqueduct was built during the Meiji Period (1868-1912) as part of a canal system to carry water and goods between Kyoto and Lake Biwa in Shiga Prefecture. The temple was established by Emperor Kameyama in 1291 after his death on the grounds of his retirement villa. It is one of the most rewarding temples to visit in Kyoto with spacious grounds and numerous sub temples to explore. 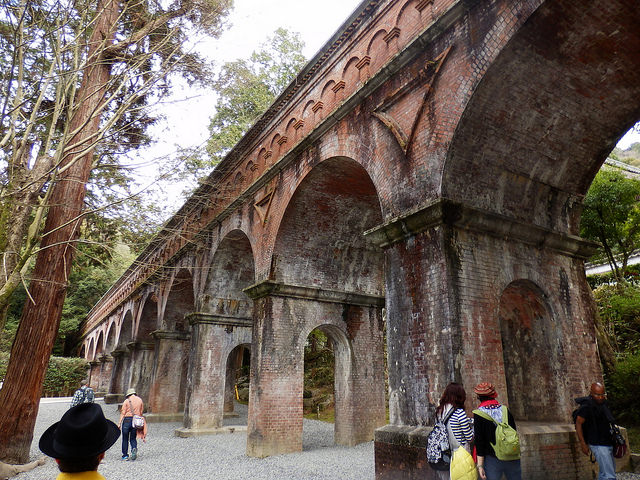 Fushimi Castle also known as Momoyama Castle or Fushimi Momoyama Castle was originally built in 1592 by the second great unifier of Japan, samurai warlord, Toyotomi Hideyoshi as a retirement palace. It featured gold leaf walls, as well as elaborate furnishings and decorations. The current structure is a 1964 replica of the original. 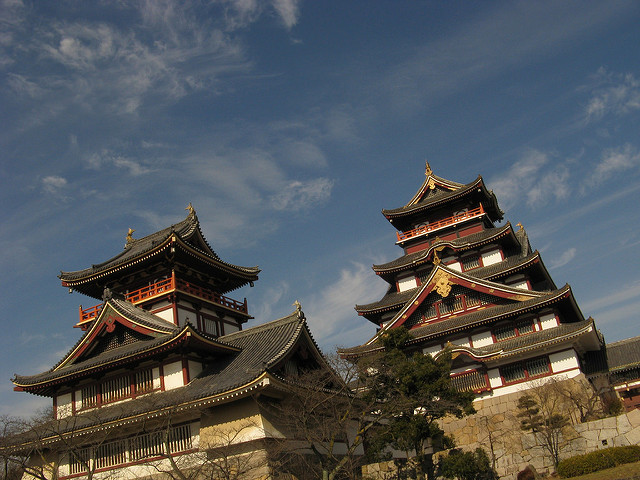