The Best Public Art to Enjoy in Bali 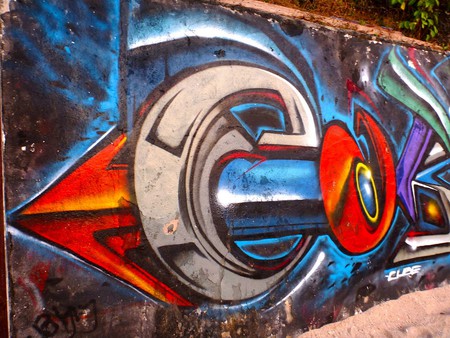 Bali’s rich cultural and spiritual values translate well into the arts, including those that tourists can enjoy in public places for free. From ancient epoch-inspired statues to contemporary murals and graffiti, explore the best public art in Bali.

The Statue of Titi Banda

Bridge
Facebook
Email
Twitter
Pinterest
Copy link
Share
Map View
Majestically standing on Bali’s busy three-way junction in East Denpasar, the statues of Titi Banda depict a particular scene from the Hindu epic Ramayana, where Rama departs on a journey to save the love of his life, Sita. Faced with a massive ocean, Rama gets help from millions of monkeys who work together to build a long and solid bridge for him, named the Titi Banda Bridge. This particular statue only shows about 20 monkeys in action, but it’s still mighty epic. For locals, the story of Titi Banda teaches lessons of teamwork and loyalty, and also provides a magnificent backdrop for selfies.
Open In Google Maps
No. 90 Jalan By Pass Ngurah Rai, Bali, 80237, Indonesia
Give us feedback

Built in 1989, the giant baby statue is relatively new. However, it quickly gained significance for the stories and mysteries surrounding it. Throughout the 1990s and 2000s, nobody knew how, why or who had put the gigantic figure on Sakah Street. Now, it is known that a former regent constructed it, and it is the depiction of Sang Hyang Brahma Lelare, one of the main deities of Balinese Hinduism, in his infant form. Many believe that the statue is haunted, as some locals have testified seeing it crying in the middle of the night during full moon. Regardless, the Sang Hyang Brahma Lelare statue is a sacred space, often hosting daily prayers or religious rituals.

Murals are dotted around many popular spots in Bali, but Canggu is arguably the street art capital of the island. While murals and graffiti are often seen as vandalism, locals and tourists in Canggu have begun to embrace them as an enjoyable form of art. It’s not hard to find captivating murals in Canggu, as many residents don’t mind — and have even requested that — their walls be painted by artists. The artistic vibe in Canggu is throbbing with international-scale events and occasional visits from foreign street artists, nurturing more and more fascinating works in the vibrant area.

The gigantic double-neck guitar just outside Hard Rock Café Bali has become an icon in the area, with tourists lining up to take photos. Located just opposite the famous Kuta beach, the towering instrument was built as a tribute to a local guitarist known as Balawan, regarded as one of the fastest guitarists in Indonesia and one of a handful of double-neck guitar virtuosos in Asia. Not just an impressive and gigantic figure, the statue was built to represent Bali’s local icons, reflected by the checkered pattern and curve resembling the entrance to Hindu temples seen throughout the island.

As a heroic figure in the Mahabharata Hindu epic, Gatotkaca is portrayed with nothing less than a dashing statue in a manly pose, riding his chariot with six horses into battle. Located near the airport, this statue is a thoughtful greeting to tourists because Gatotkaca is known as a protecting knight, bestowing security and safety to everyone visiting and leaving the island. The area surrounding the statue is lively in the evening, when locals often gather to relax and enjoy food and snacks sold by street food vendors.

Representing Brahma, the Hindu God of creation, the Catur Muka Statue has aesthetic, cultural and spiritual value. The nine-metre tall statue has four faces, each facing one of the four points of the compass. The four faces exemplify Brahma’s infinite power throughout the universe. Brahma is depicted standing on a lotus, symbolising the universe and holiness. The Catur Muka Statue is also a venue for many festivals and religious activities.

Memorial
Facebook
Email
Twitter
Pinterest
Copy link
Share
Map View
Remembering the lives lost during the island’s greatest tragedy, a beautiful memorial stands strong in the heart of Kuta. The names of the 202 Bali Bombing victims are written on a black placard in sympathy and remembrance. Occasionally, families, friends and activists hold prayers, light candles, bring flowers or bring letters to the memorial to remember their loved ones. Other tourists cherish the spot for its aesthetic and beauty, with majestic architecture and surrounding greenery, a testament to the island’s hope and courage against terrorism.
Open In Google Maps
Jalan Raya Legian, Bali, 80361, Indonesia
Visit Website
Give us feedback
Give us feedback