The 10 Most Beautiful Churches in Jakarta 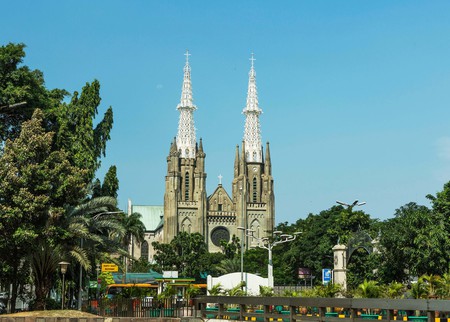 Charming colonial buildings, tradition-influenced design and even charming fusions make these churches more than just a place to attend masses. These beautiful churches in Jakarta are also historical landmarks, a cultural heritage, and are architectural feats.

If someone told you the world’s largest Muslim population had a plethora of magnificent churches in its capital, you may not find it easy to believe. But Indonesia is interestingly heterogeneous that way. The Christian community in the country is very much alive, spawning captivating relics and buildings across the archipelago from the colonial era until today. Diversity is present even across churches or denominations, resulting in a fascinating range of church buildings and stories behind them. 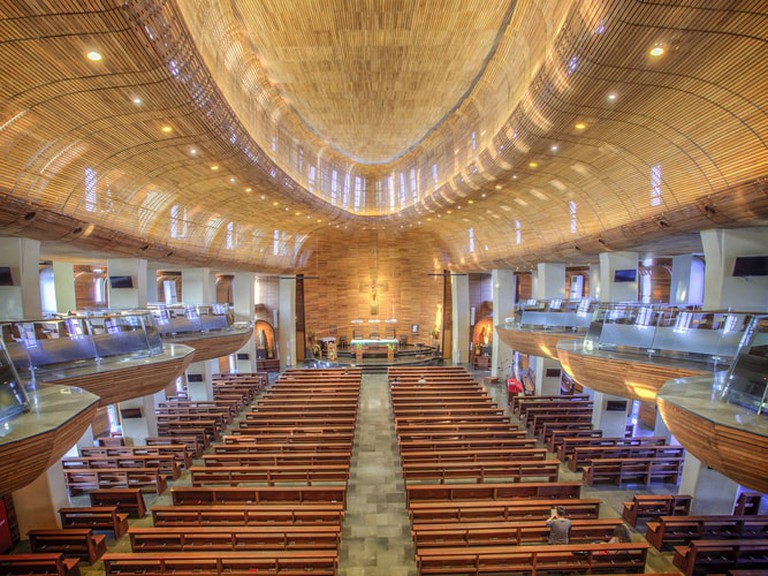 Stella Maris Church in the North of Jakarta, Indonesia. | © Andreas H/Shutterstock
This church’s sophisticated wooden interior creates a solemn and relaxing ambiance for those who come to worship. A soft earthy palette is also reflected by the stone floor and exterior, together creating a local and natural feel. The façade takes the form of three concentric ovals adorned by long windows and framed by greeneries. Thoughtful and aesthetic design granted Stella Maris a number of architectural awards, including the honour of getting International Architecture Commendation from The Australian Institute of Architect for its graceful interior.
Open In Google Maps
17 Taman Pluit Permai Timur, Jakarta, Indonesia
+62216691642
Visit Website
Give us feedback 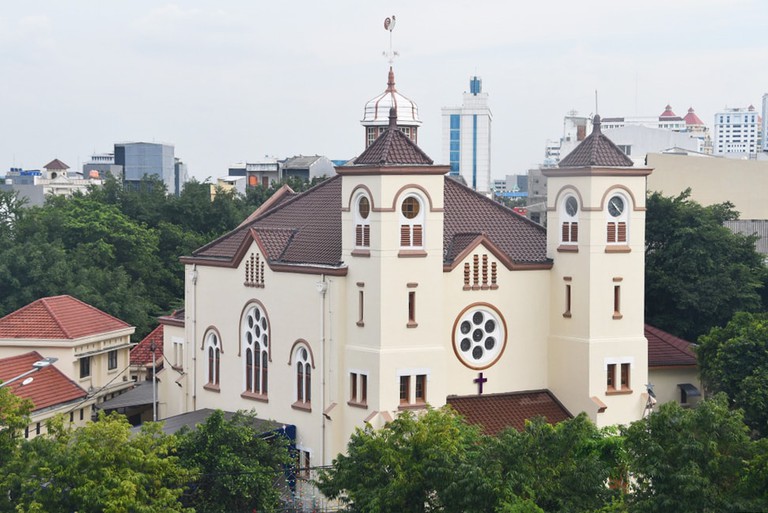 Church GPIB Pniel Jakarta, Indonesia. | © Saka Wijaya/Shutterstock
Like many colonial heritage structures in Indonesia, this church manifests a certain classy and nostalgic feel in its architecture. Started off as a small chapel in 1856, the church building has since undergone a number of rebuilding and revitalisations. Now, the whitewashed building has two main towers, with a rose window and other design elements typical of old European churches. Many of its interior components are remnants of history, including an 1855 bible in Dutch.
Open In Google Maps
12 Jalan H. Samanhudi, Jakarta, Indonesia
+62213807621
Give us feedback 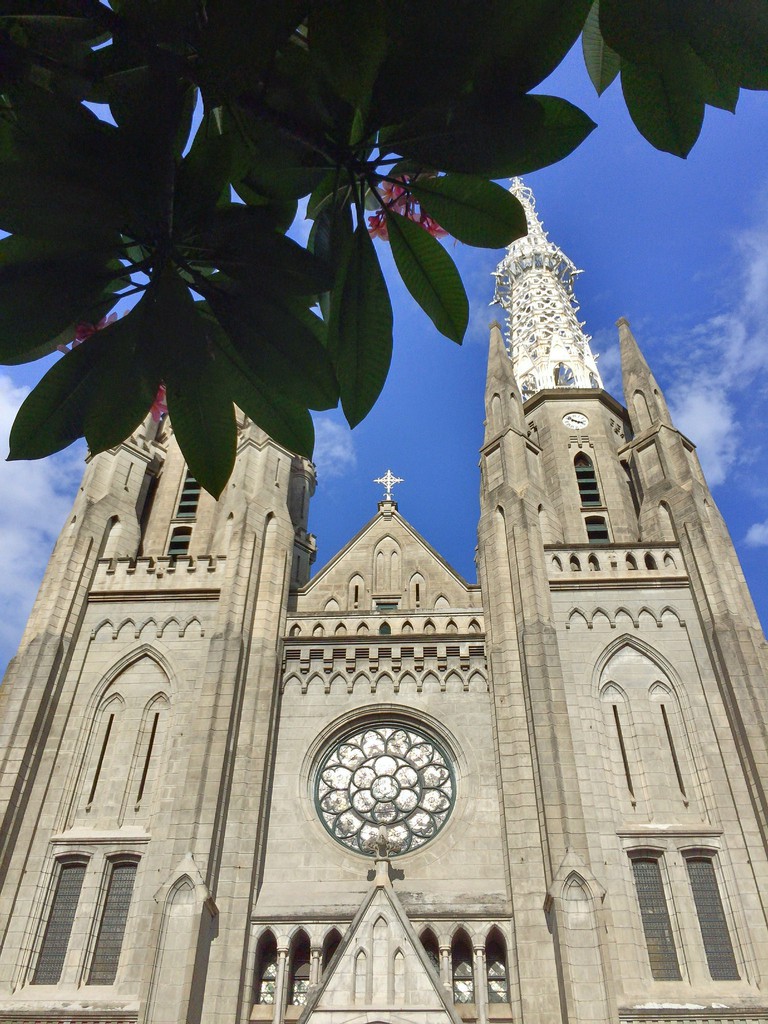 The neo-gothic cathedral of Jakarta | © Seika / Flickr
Built with the Neo-Gothic style typical of the time of construction in 1901, this cathedral looks more like the ones you’ll encounter in Europe than at the heart of the world’s largest Muslim nation. The façade mimics natural stone construction with towering spires and interiors adorned with statues and symbolic objects. This church also serves as a heritage site and destination with one of its three main spires housing a museum showcasing relics of Catholic rituals.
Open In Google Maps
7B Jalan Katedral, Jakarta, Indonesia
+62213519186
Visit Website
Give us feedback

Regina Caeli Catholic Church, Jakarta Indonesia. | © Andreas H/Shutterstock
Unlike many Catholic church buildings, Regina Caeli wasn’t built like the centuries-old Gothic architecture. Instead, it assumes a rather modern, sleek façade that subtly resembles a ship. While the iconic exterior alone is enticing, the magnificent interior is also state of the art. Upon entering the building, you cannot not focus your attention on the elegant and dignified altar. Beyond the dimmed, solemn colours of wood and stones, this church was also built to blend with nature, incorporating large windows overlooking the lush mangrove forest just outside the compound.
Open In Google Maps
1 Mediterania Boulevard, Jakarta, Indonesia
+622155964379
Give us feedback 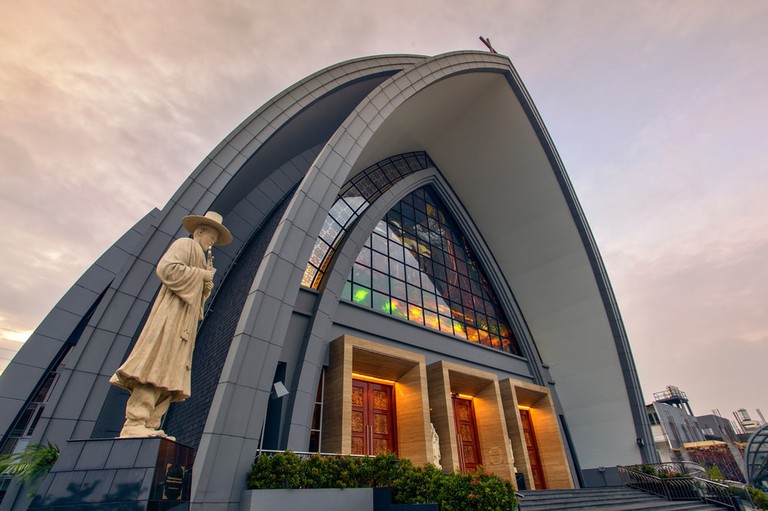 St Andreas Kim Tae Gon, Jakarta, Indonesia. | © Andreas H/Shutterstock
This Catholic church is among the first in Indonesia to honour an Asian saint instead of one from Europe, and Kim Tae Gong Church cherishes its namesake martyr from Korea. The cultural stance governs some architectural aspects of the church, such as the patriarch’s statue wearing a traditional Korean hat and wood carvings depicting his life stories. Both the exterior and interior look cosmopolitan with some conventional church building elements like stained glass, a magnificent but solemn altar, and ornate, well-polished articles for rituals.
Open In Google Maps
1 Jalan Puspa Gading Timur Blok H2, Jakarta, Indonesia
Give us feedback 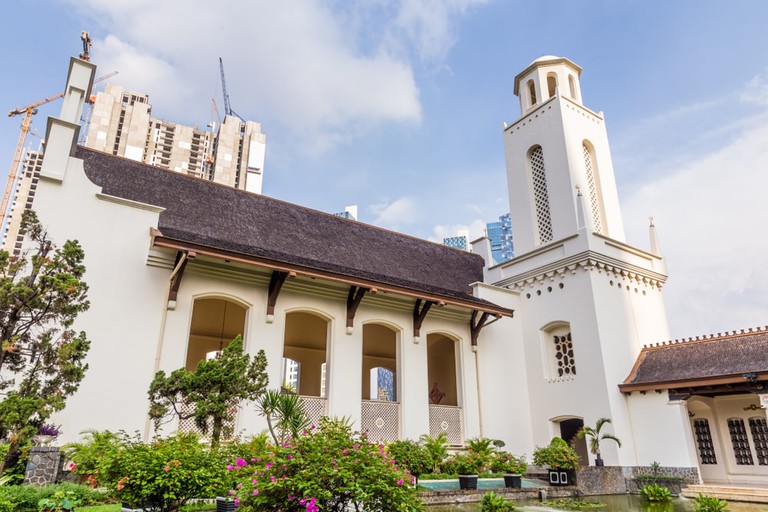 Dutch field of honor Menteng Pulo in Jakarta, Java Island, Indonesia. | © HildaWeges Photography/Shutterstock
This lovely chapel is located in a memorial park built for war victims from the Royal Netherlands East Indies Army, which employed the local community as well as Dutch militaries. Aside from acknowledging deceased armies who may not be Christians, this chapel has extended its function as a general place of worship, welcoming people of every belief to pray and pay tribute. Although initially built with typical church features, the building also has a mosque-style dome and minaret that interestingly enough is adorned with religious symbols for Islam, Christian, Taoism, and Judaism. Having the vast memorial park as its yard, this church completes the compound with its own charm, with the eclectic design elements, immaculate white walls, and grand but welcoming character.
Open In Google Maps
Menteng Pulo, Jakarta, Indonesia
+62218313253
Visit Website
Give us feedback 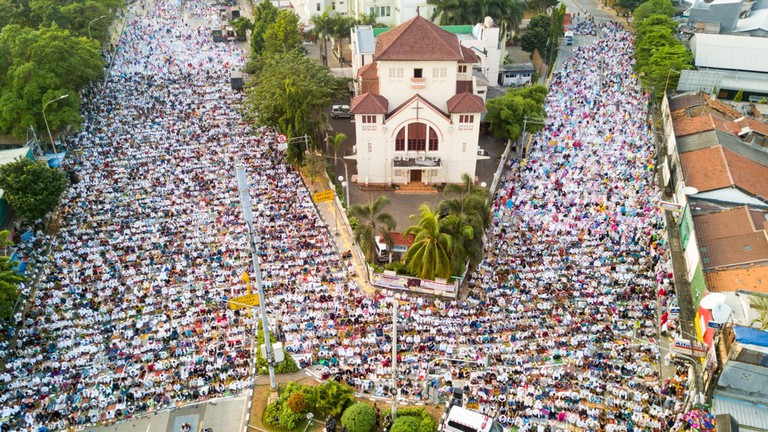 Thousands of people praying together on the street during Eid-ul Fitr day near Koinonia Church in East Jakarta, Indonesia. | © Creativa Images/Shutterstock
As the first church in Jakarta’s eastern area, this building has been granted cultural heritage status. Beyond its historical significance, Koinonia church boasts an effortlessly charming architecture that makes the building stand out among its neighbours. The corners of the building are braced by soaring towers, connected by gables that frame the main hall. Koinonia church stands proud at the end of the road where two main avenues meet, its beauty observable from almost all sides.
Open In Google Maps
218 Matraman Raya, Jakarta, Indonesia
Visit Website
Give us feedback 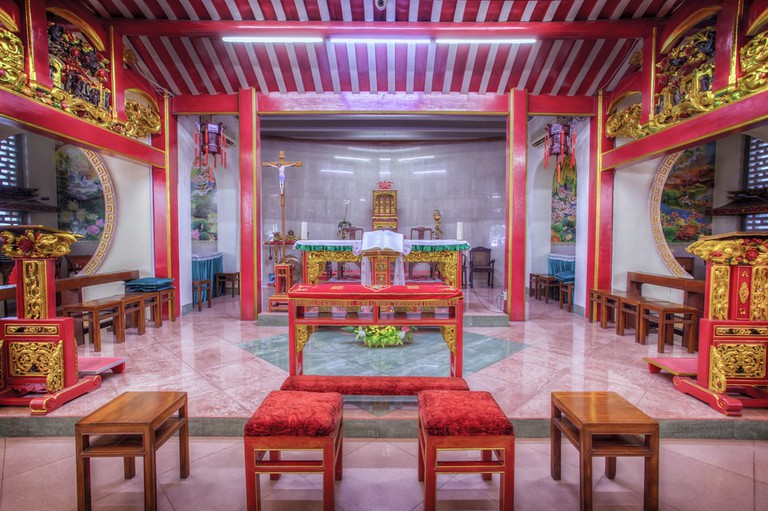 St Maria de Fatima Catholic Church, West Jakarta, Indonesia. | © Andreas H/Shutterstock
Located in Jakarta’s chinatown area, this church reflects a peculiar jumble between Chinese architecture and elements of the Catholic beliefs. From the vivid red and yellow hues to grand lion statues at the entrance, at first glance this church looks more like a Chinese temple or shrine. But the wood carvings and paintings of Jesus are unmistakable, albeit surrounded by ornate oriental knick-knacks. First established in the 1950s, this church is also an anointed cultural heritage.
Open In Google Maps
47 Jalan Kemenangan III, Jakarta, Indonesia
Visit Website
Give us feedback 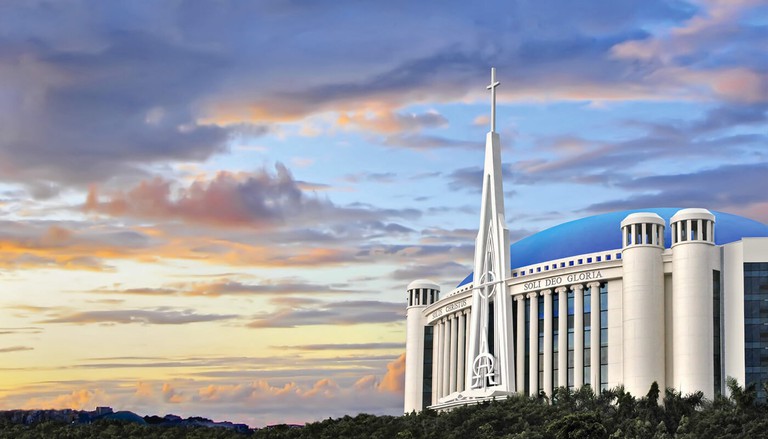 Indonesian Reformed Evangelical Church, Jakarta | © Indonesian Reformed Evangelical Church
This splendid white church building with its magnificent blue dome is an unmissable landmark in Kemayoran, Central Jakarta. Hemmed by slender doric pillars, the front side is signified by a towering triangle structure representing the church’s symbol with a cross on top. The building has six storeys and in all its grandeur can contain 2,000 to 4,000 people on each level. The interior is also designed to accommodate a large congregation, with an amphitheatre seating arrangement orienting the glorious altar.
Open In Google Maps
1 Industri Raya Blok B-14, Jakarta, Indonesia
+622165867811
Visit Website
Give us feedback 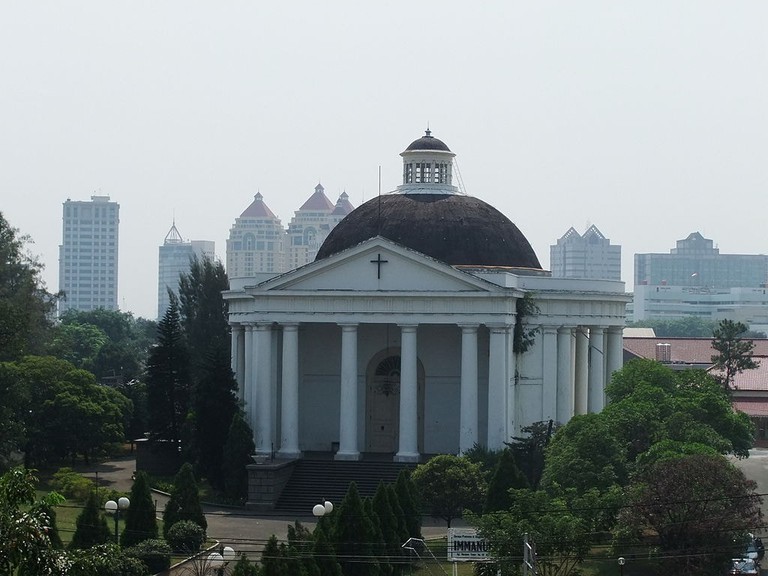 Immanuel Church in Jakarta | © Midori / WikiCommons
In addition to being a prominent place of worship, this church at the heart of Jakarta is also a historical landmark, having been built during the colonial era in 1834. Moreover, this Protestant church is an architectural feat with monumental pillars and exquisite Corinth-style carvings, a stunning circular layout covered with marble tiles. Inside the effortlessly elegant interior sits an antique pipe organ from 1843 that continues to be used for church services to this day.
Open In Google Maps
10 Jalan Medan Merdeka Timur, Jakarta, Indonesia
+62213440747
Visit Website
Give us feedback
Give us feedback