Sway Above the Ocean on Indonesia's Incredible Gili Swings 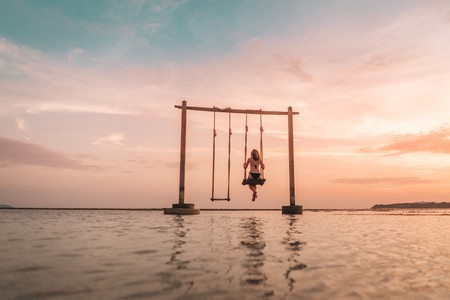 Blissful swings float above the ocean, cradling silhouettes as the sun dips beneath the waves. Sound familiar? It will to those who have caught wind of the social-media sensation coming out of the Gili Islands.

Avid travellers to Indonesia are no strangers to the Gili Islands, a string of small, beautiful islets off the coast of Lombok. Their many charms include an abundance of striking marine creatures, serene beaches and a simple but sweet innovation that combines a nostalgic pastime with tropical vistas: ocean swings. Since their social-media debut in 2014, they have been among the top things to do on the islands, alongside diving and partying – because what says “laid-back beach vibes” more than stylish, rustic wooden fixtures that sway above the ocean?

Four years ago, this section would probably have been instructions on how to get to the Gili ocean swing. However, similar attractions have been popping up since the original at Ombak Sunset Hotel shot to social-media fame. Now, all you have to do is walk along the coast of Gili Trawangan and choose one out of nearly a dozen scattered around the small island.

Ombak Sunset’s is called the Datu Swing, named after the highest royal caste in Lombok. The name isn’t the only thing that will make you feel like royalty – the sweeping view of the horizon in glorious bursts of gold will do its part, too. This hotel is slightly removed from Gili T’s main strip (especially by a small island’s standards) but, come sunset, it is among the most happening spots in the archipelago. 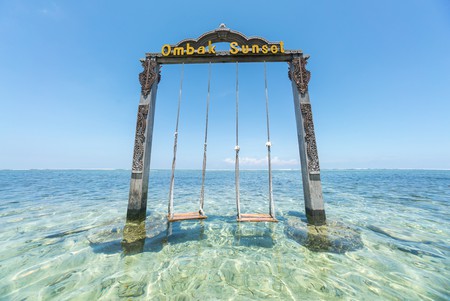 Other amazing swings in Gili Trawangan are owned by Pandawa Resort and The Exile, which also has a sea hammock. You can also find swings on the other two Gilis – Gili Meno and Gili Air – which are typically less crowded than those on Gili T.

The trend has been adopted by other destinations in Indonesia, with ocean swings surfacing on the beaches of Lombok and Bali.

What to expect from a Gili Swing

The serene photos of Gili swings may lead you to think of a good time relaxing, swinging above the ocean while watching the glorious sunset. Sadly, most of the time that is not the case. What you don’t see in the idyllic Instagram posts is the queue of people waiting to get their picture taken. At sunset, it’s often rush in, snap-snap and get out of there – and you need to let others do the same.

The good news is that you can still strategically boost your chances of making a real experience out of these magnificent ocean swings. For one, you’ll have better luck hogging one of the swings on the less crowded Gili Meno or Gili Air, and outside the peak time (when everyone else is busy diving or dealing with hangovers).

Several hotels including Ombak Sunset employ a professional photographer to take your Insta-perfect ocean-swing picture, so don’t worry if you’re travelling alone or not feeling confident about your photography skills. 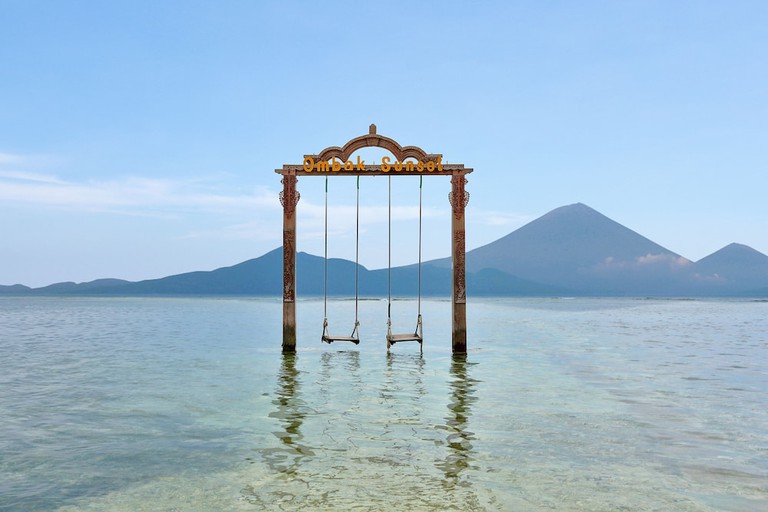 From its luxurious traditional bungalows to its hip beachside bars, you can expect the same laid-back and romantic vibe from the Hotel Ombak Sunset as you can from its famous ocean swing. The hotel is located on the quieter western side of Gili Trawangan, boasting a majestic view of Bali’s Mount Agung and the optimal angle from which to witness the island’s unforgettable sunset.