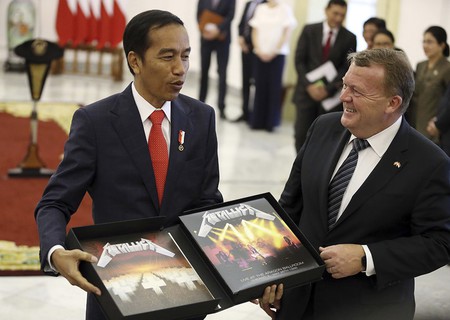 Indonesia’s president Joko Widodo has reportedly paid 11m rupiah (£600) to keep a rare Metallica album he received as a gift.

The politician received the album from Danish Prime Minister Lars Rasmussen in November and spent the cash to avoid any conflict of interest.

According to the website Kompas, Widodo was gifted a signed, limited-edition vinyl box set of Metallica’s Master of Puppets during the Danish Prime Minister’s visit last year.

The president, nicknamed Jokowi, is a well-known metalhead and fan of the band.

He regularly attends rock concerts and once admitted to Indonesian metal website Metal Rebel that he has been listening to heavy music ‘since junior high school, around the age of 14’.

The Corruption Eradication Commission (KPK) ruled that the gift belonged to the state as he received it while in office.

‘This is not about the money paid, but consistent awareness of corruption in even the smallest matter,’ a KPK spokesman told news website Detik.

Master of Puppets was first released in 1986 and is considered to be one of Metallica’s seminal albums.

It’s not the first important Metallica gift the president has been given.

Jokowi also received a guitar signed by Metallica bassist Robert Trujillo in 2013 when the band played a concert in Jakarta, although the instrument was later confiscated over concerns it might have been intended as a bribe.