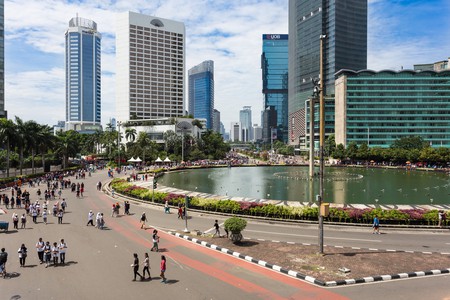 Jakartans are no strangers to gridlocks, ear-piercing horns and adding hours onto their daily commute. After all, locals in Indonesia’s capital have learned to accept bumper-to-bumper traffic as part of their lives. On Sundays however, the city transforms as cars are banned from some of its most crowded streets – giving people the rare chance to run, cycle or simply take a morning walk in their city.

Car-free Sundays have been held weekly in Jakarta since September 2007. Every Sunday without fail, thousands of people take over the Sudirman-Thamrin street, sandwiched between skyscrapers and usually one of the most jam-packed areas in the city. From 6am to 11am no vehicle, except for the TransJakarta bus, is allowed to enter the car-free zone that stretches 8.4 kilometres along the main artery of Jakarta. This street runs across many of the city’s landmarks such as the National Monument, Selamat Datang Monument, Gelora Bung Karno Sports Complex and more.

Jakarta is the most densely populated area in Indonesia. And this is not just true in terms of people: there are more vehicles than there are humans in Jakarta. Of the 18.2 million vehicles registered in the city of 10 million people, almost 75 per cent are motorbikes, 18 per cent are private cars and the rest include buses, trucks and more. This doesn’t include the million more people bustling in and out of the city in cars from nearby satellite towns like Bekasi, Bogor and Tangerang to work and do business.

When you put that many vehicles in just a tiny part of the city’s most concentrated districts, topped with lacking infrastructure in many parts of the town, bad traffic is inevitable. The INRIX 2017 Global Traffic Scorecard ranked Jakarta as having the 12th worst traffic in the world, with an average of 63 hours spent in traffic per year. 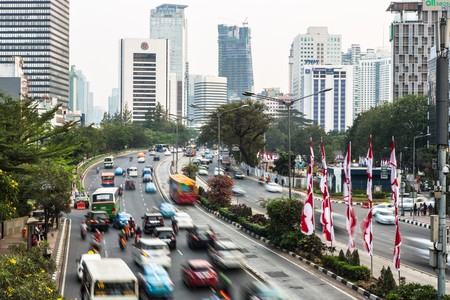 Traffic in the business district of Jakarta in Indonesia | © AsiaTravel / Shutterstock

Murky skies and bad air quality naturally follow the traffic problem. Jakarta never fails to make it onto the list of the planet’s most polluted cities, topping it regularly. About 70 per cent of the city’s air pollution comes from vehicles.

Jakarta hosted its first Car Free Day on September 22 2002, coinciding with World Car Free Day. Held as an initiative to campaign against the use of leaded petrol in vehicles, the event was championed by both environmental activists and ordinary residents of Jakarta. More than 10,000 participated that Sunday.

As the years passed, Jakarta kept participating in World Car Free Day; each year bringing more people, communities and government agencies showing their support. Finally, the program was officially launched by the governor in 2007. It was introduced from once a year to once a month, to twice a month, and finally every Sunday.

A few hours of vehicle-sterile streets per week may not seem much to combat the pollution problem. Even so, the Car Free Day program also deserves credit for marginally alleviating Jakarta’s bad air quality. In 2016, the city’s air quality meter reported a 65 per cent decline in hazardous particulate matter on the mornings of Car Free Days. It is also no small matter to note that the weekly program helps facilitate Indonesians — one of the world’s laziest populations to walk — to get moving and keep the environment in check. 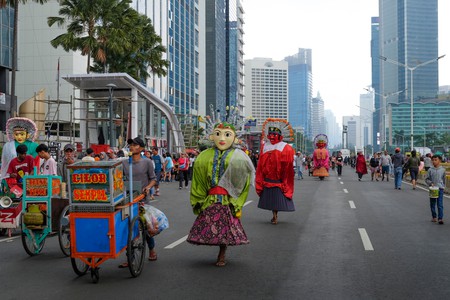 There is also a crucial element of community that these days brings the big city to life. From family days out to live performances and flash mobs, it’s never a bland affair at Jakarta’s car-free days. By some accounts, it even feels like a weekly, city-wide community festival. Participants are invited to take part in random fun games, join in a group fitness dance, or sample street snacks from vendors. Even with all the festivities going on, the street is still large enough to stay focused on your run uninterrupted.

What comes after Car-Free Sundays?

Car-free days are not a concept unique to Indonesia. Many European cities celebrate World Car Free Day annually every September. Singapore bans cars from its Central Business District once every few months. But what sets Jakarta’s car-free days apart, held weekly without fail, are that they have become a cherished routine for the daily lives of many Jakartans. Other Indonesian cities have followed in Jakarta’s footsteps. Surabaya, Medan, Bandung and Yogyakarta have all hosted weekly car-free days. 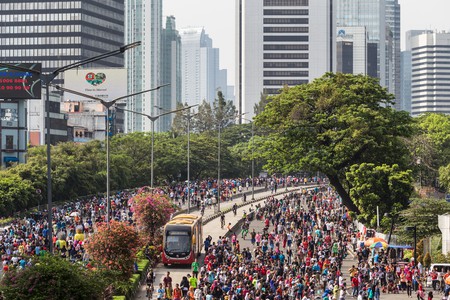 Despite its growing popularity, car-free Sundays are hardly an ideal solution for solving Jakarta’s traffic and air pollution problem altogether. The government is, and should be working on a better public transportation system. The city’s mass rapid transportation line is expected to finish in 2019 and enforce regulations that are expected to cut the use of private transportation, like the odd-and-even plate policy.

According to the policy, only vehicles with odd plate numbers can go through some of the main streets on odd dates, and vice versa. The local government is also working towards raising parking rates in the city to discourage people from using their own public vehicles daily.