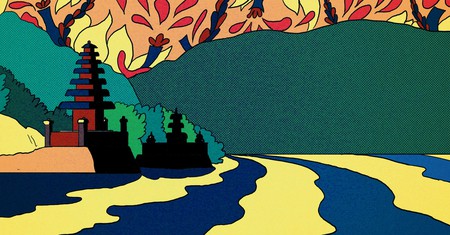 As the main language for the world’s fourth most populous nation, Bahasa Indonesia is consequently one of the most widely spoken languages.

Mostly developed from the Malay language, the Indonesian language, like many other cultural objects of the nation, reflects assimilation and influence from different cultures around the world, such as Arabic, India, and Dutch.

Just like many other cultures, the full moon is often associated with supernatural powers that call for special ceremonies and rituals. Balinese Hindu, for example, gather at certain temples to conduct special prayers and seek spiritual excellence or wholeness, which the full moon represents.

Senja is an important part of any day in Indonesia. Home to the world’s largest Muslim population, prayers will be heard in most neighborhoods once the dusk draws near. Also, a rather popular superstition forbids children to play outside during dusk, as evil spirits will roam the earth during this time and take them away.

The ocean is no doubt a big part of Indonesia, the planet’s largest archipelago. The nation has a long maritime history, and many tribes still depend on the sea for their livelihood. Nowadays, many localities in Indonesia become world-famous as a paradise for diving, snorkeling, and many other fun saltwater activities.

In addition to the sumptuous ocean resources as an archipelago, Indonesia is also bestowed a landscape that provides a flourishing agricultural scene. Bandung in West Java was once a world-famous producer of vegetables during the colonial era. Now, some 30% of the population still work in agriculture throughout the country.

Blessed with an extensive coastline and therefore countless idyllic beaches, the horizon has become one of the most iconic sights to see in Indonesia. Sunrise, sunset, or stretching mountain range is a common vista to enjoy in this sprawling archipelago. Just like in the English language, cakrawala also means perspective, outlook, or range of knowledge and experience.

Indonesians are notorious for being very friendly. It’s easy to make friends with Indonesians, and they tend to keep close-knit communities that support and help each other—a custom that reflects an ancient philosophy of guyub or togetherness.

Currently, Indonesia has a relatively young population—half its citizens are below 28 years of age. This demographic has been contributing to a lot of change in many sectors, from economy, consumerism, workplace trends, and more. A derivative of remaja, pe-remaja-an, means rejuvenation, literally ‘making young again’.

Melati is a native tropical jasmine that is ubiquitous throughout Indonesia. Loved for its elegant white look and sweet aroma, melati is often used in ingredients for perfume, cosmetics, tea, or ornaments. This flower is also used as a national symbol and represents purity, sincerity, and sacredness.

Many Indonesian tribes tend to worship the ancestors rather than natural objects like the sun. Even so, the life-giving force of the sun is cherished through many different rituals. Be it the sundown or solar eclipse, events around the sun still govern customs like prayers and ceremonies.

Comes from the word ayun that means swing (verb), ayunan is a popular childhood pastime for many Indonesians. Even without any parks around, many households would make a DIY swing from car tires or wood beam tied to a tree. Nowadays, iconic swings like the one at Zen Hideaway Ubud or Ombak Sunset Gili Trawangan, have become popular tourism magnets in Indonesia.

Diversity is at the heart of living in Indonesia. With hundreds of ethnic groups, cultures, and languages, the nation is used to a wide variety of stuff. A traditional meal recipe, for example, can have dozens of variations in different localities.