10 Dishes From Kerala Made With Coconut 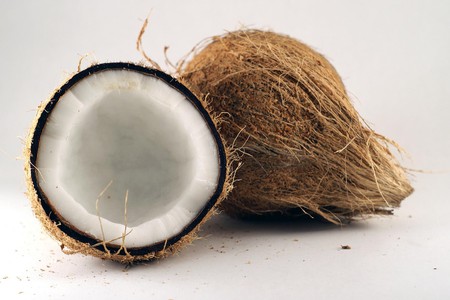 Coconut is a fruit, not a nut | © Hafiz Issadeen / Flickr

Kerala’s cuisine is replete with a myriad of flavours. From spicy to sweet, ranging from snacks to main courses; there are numerous dishes to delight your palate. However, one ingredient that remains a constant in the majority of delicacies from God’s Own Country is coconut. Used in many ways – sliced, grated, or ground into a paste – coconut lends a distinctive flavour that characterises Kerala’s cuisine, beginning with coconut oil, the foundation in which almost all the dishes are cooked.

A steamed delicacy, Puttu is a popular breakfast all around Kerala. Made primarily of rice powder, it also has ingredients such as corn powder, wheat, and ragi. However, the chief component is grated coconut that is initially combined with the mixture of the powder, and later used to seal the lump of puttu before steaming it. Coconut lends a soft and juicy texture to the otherwise powdery and dry puttu. Find the recipe here. 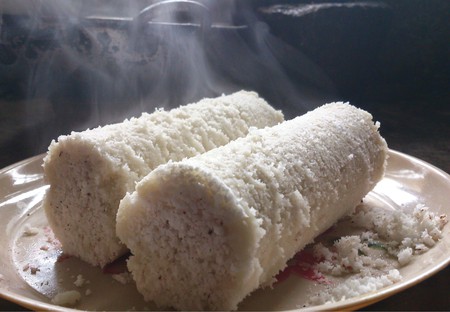 Made with yoghurt and vegetables including raw papaya and yam, Kaalan has thick gravy. The dish is an essential part of the traditional Kerala feast, sadya. Coconut comprises an imperative part of the dish, and is incorporated by blending it into a smooth paste. The dish is topped off with a tadka – where mustard seeds, dried red chillies, and curry leaves are tempered in a flash of hot oil. Find the recipe here. 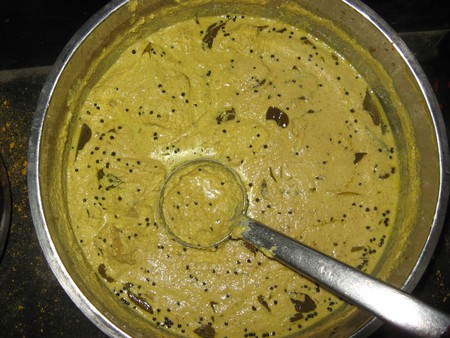 A mélange of vegetables such as drumstick, yam, and plantain, this pale green semi-dry curry is one of the highlights from the sadya. Coconut is a key ingredient, which is assimilated by blending it with green chillies and cumin seeds. The dish is finally dressed with a generous drizzle of virgin coconut oil. Find the recipe here. 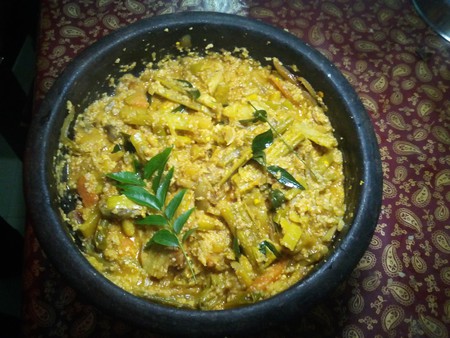 Aviyal is relished during Vishu and Onam | © Ramjchandran / WikiCommons

A small dumpling made with rice powder, kozhukatta has a sweet filling of coconut and jiggery. It is a popular tea-time snack traditionally made at home. It is also prominent among the Christians of Kerala, who prepare it for the Oshana Sunday evening celebrations of St Thomas. The custom is so steeped in the tradition of the Kerala Christians that Palm Sunday has even come to be known as Kozhukatta Perunnal (feast). Find the recipe here. 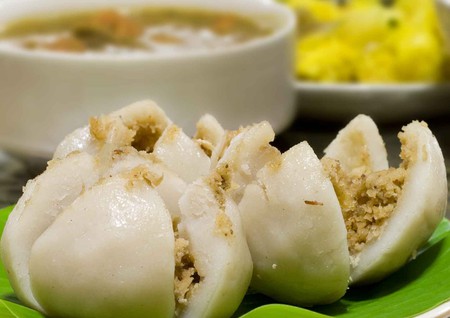 Yet another sweet delicacy made of rice powder, ela ada is a pocket of sweet fillings such as coconut and jiggery, which is wrapped in a banana leaf and then steamed. The fillings can vary, with constituents such as mashed jackfruit, mashed banana, or even meat. Ela ada is consumed either as breakfast or an evening snack. It can be enjoyed hot and fresh or even after it has cooled down. Find the recipe here. 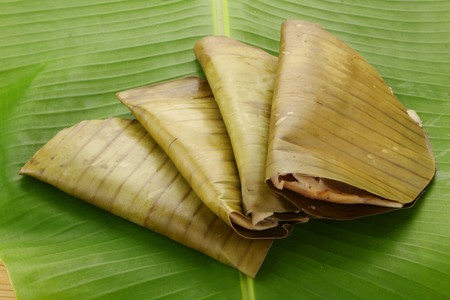 The favoured classic dessert for all Malayalis, Paayasam has been an integral part of all celebrations of Malayalis. Prepared in a number of ways using various main ingredients, Paayasam comes in many types such as Parippu Paayasam, Paalada Paayasam, Ada Prathaman, etc. However, perhaps the most essential component remains coconut, which is incorporated in the form of coconut milk. Find the recipe here. 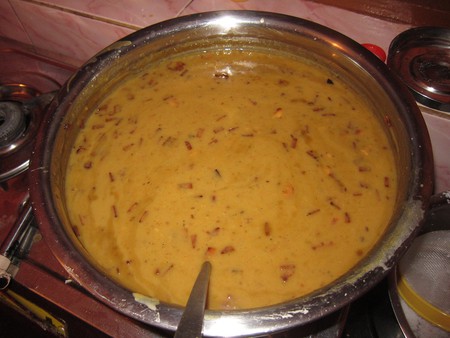 One of the popular curries across Kerala, theeyal is much favoured for its versatility and ease of preparation. Coconut forms a key ingredient in the dish, which is incorporated by roasting and grinding it along with other spices such as dried red chilli, fenugreek, and tamarind. It is best eaten along with rice. Find the recipe here. 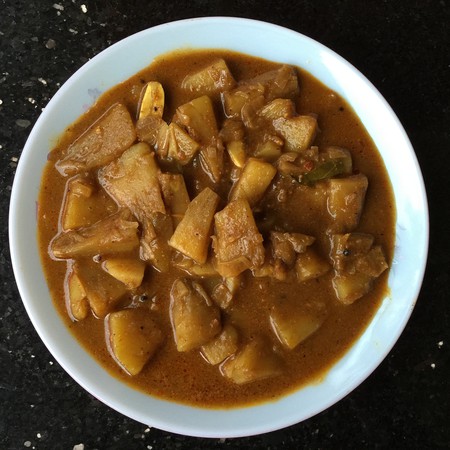 Theeyal can be made out of various vegetables | © Sanjoykanneth / WikiCommons

Coconut forms the basis of every thoran dish in Kerala, of which there are several kinds. A dry, stir-fried dish, it is made from finely chopped leafy and dry vegetables such as cabbage, spinach, moringa leaves, beans, carrots, beetroot, etc. Grated coconut is added to the dish to add juiciness and texture. Find the recipe here. 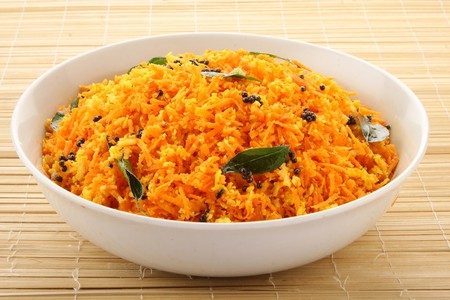 Thoran is an essential part of the sadya | © Samphotography / WikiCommons

Originating from the Malabar region of Kerala, unnakaya is a sweet dish that is savoured as a snack or tea-time accompaniment. It is made by wrapping a flattened banana which is stuffed with grated coconut, jaggery, and mashed plantain. It is then deep fried and savoured in its golden brown form. Find the recipe here. 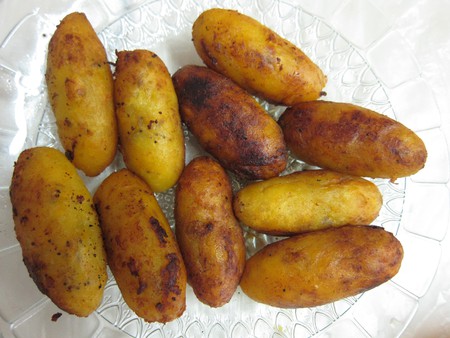 The mass favourite dish of Malayalis popular all across the state, beef fry can be relished with any meal and also forms a perfect accompaniment for alcohol. It is made by shallow-frying small pieces of chopped meat. The addition of coconut pieces elevates the flavours of the dish. Find the recipe here. 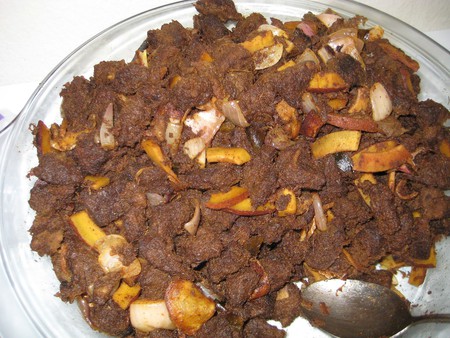 Beef fry tastes heavenly with any main course such as rice, chappati, or Kerala Porotta | © Shijan Kaakkara / WikiCommons
Give us feedback