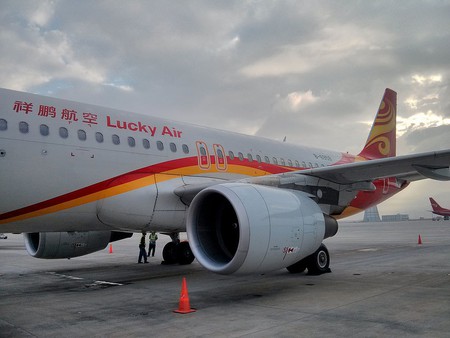 In the latest example of a good luck superstition turned bad, a 76-year-old Chinese woman ended up delaying a flight and seriously jeopardizing its safety after tossing coins into a plane’s engine for good luck.

The Chinese are well known for their superstitious nature. Among some of the more common customs and superstitions is the practice of feng shui, the belief that the number four is unlucky, and there’s even a Chinese superstition that states if one points at the moon with one’s finger it will make one’s ear tips fall off.

However, it appears a “good luck” superstition involving tossing coins has brought an elderly Chinese lady more bad luck than it has good.

At an airport in the Chinese city of Anqing in eastern Anhui, a 76-year-old Chinese lady was caught tossing coins into the air, one of which landed in the plane’s engine.

The superstitious lady was a dedicated Buddhist and believed that the act would ensure a safe flight and bring “blessings,” but it only ended up delaying take off and seriously compromising the flight’s safety.

The flight was grounded and the lady was detained by authorities. Fellow passengers spoke of how they saw the elderly woman, who was 76 years old, tossing coins at the engine of the the Lucky Air jet during boarding. Ground crew later found coins on the tarmac next to the plane.

China Southern Flight 380 was delayed at Shanghai Pudong Int’l Airport on Tues after an elderly woman threw coins into the engine for luck.. pic.twitter.com/wSSWJg9bcE

Had the flight taken off with a coin stuck in its engine, it could’ve caused serious damage, including failure.

Transport police confirmed that the lady was taken into custody, but it is yet unclear if she will be charged. The coin throwing incident resulted in the flight being grounded overnight as a safety precaution. The passengers were subsequently flown to their onward destination the following morning, authorities said.

This is not the first time a flight in China has been delayed due to coin tossing. Earlier in June, a flight from Shanghai to Guangzhou was delayed for more than five hours after an 80-year-old woman passenger was suspected of throwing coins into the plane’s engine to ensure “good luck.”

Domestic flights in China are notorious for delays with an estimated one-third of all flights being late. Coin throwing is just the latest reason for flight delays.

In recent years, Chinese travelers have made headlines for several safety incidents, including opening emergency doors and assaulting cabin crew. China’s Air Transport Association has even introduced a tourist blacklist, which tries to shame misbehaving tourists by publishing their name and photo in the media and having them banned from boarding international flights at Chinese airports for two years.