The 15 Must-Visit Attractions in Beijing 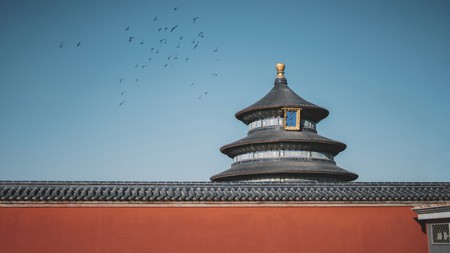 China’s bustling capital of 21.5 million people is constantly contradicting itself. Ancient and modern, busy and serene, grey and green. You may get lost and you may get tired during a sightseeing trip to Beijing, but you will certainly not get bored. 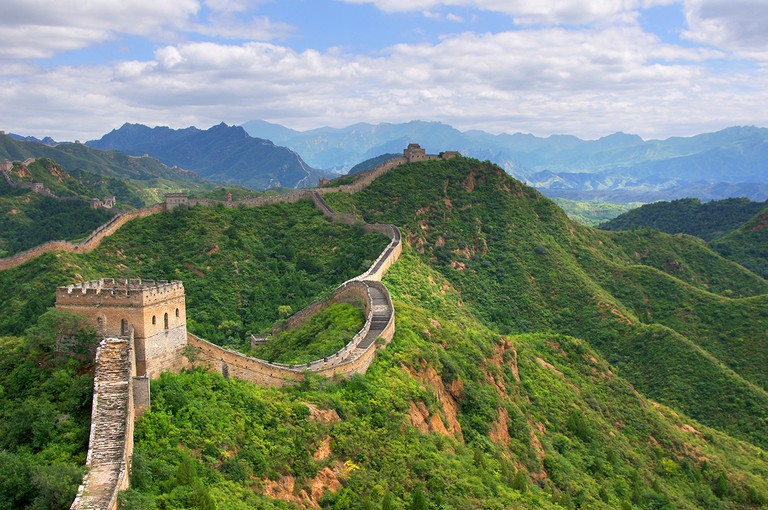 ©Zjzpp163 / iStock
Book Now
One of the most instantly recognizable landmarks in the world, the Great Wall is believed to have been built as early as the seventh century BC, although the majority of the existing wall was constructed during the Ming dynasty (1368-1644). The most famous part was built by Qin Shi Huang (the first emperor of the Qin dynasty) from 220 to 206 BC. The whole wall is 21,196 kilometres (13,171 miles) long and covers the ancient northern borders of China. It was built to protect the country against invasions from the northern nomadic groups of the Eurasian Steppe. The most popular sections to visit include Badaling, Jiayu Pass and Shanhai Pass, but if you want more excitement, the rugged and breathtaking Simatai section of the wall is definitely the one to head for.
Open In Google Maps
Miyun District Beijing, China
+861069031057
Visit Website
Give us feedback 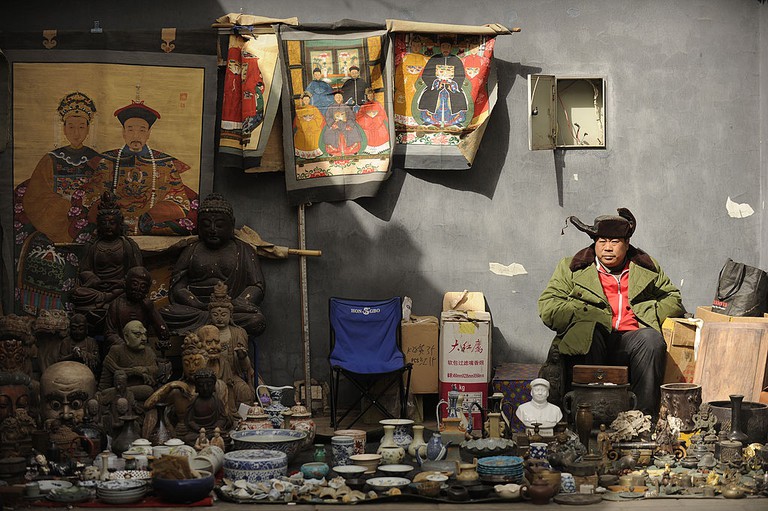 ©Peter Parks / Getty Images
Book Now
Panjiayuan Antique Market is the biggest outdoor market in Beijing, and its 4,000 stalls cover somewhere around 26,000 square metres (279,861 square feet). It specialises in Chinese antiques and art pieces, so you’ll be able to pick up unique jade, paintings, calligraphy, teapots and genuine antiques, all piled among a good selection of cheaper souvenirs and nostalgic tat. Panjiayuan Antique Market is a real hodgepodge of quality, so haggle like crazy and walk away if you don’t get the price you want. If the seller lets you leave, chances are the wares are real.
Open In Google Maps
Pan Jia Yuan Jiu Huo Shi Chang Chaoyang Qu Beijing Shi, China
Give us feedback 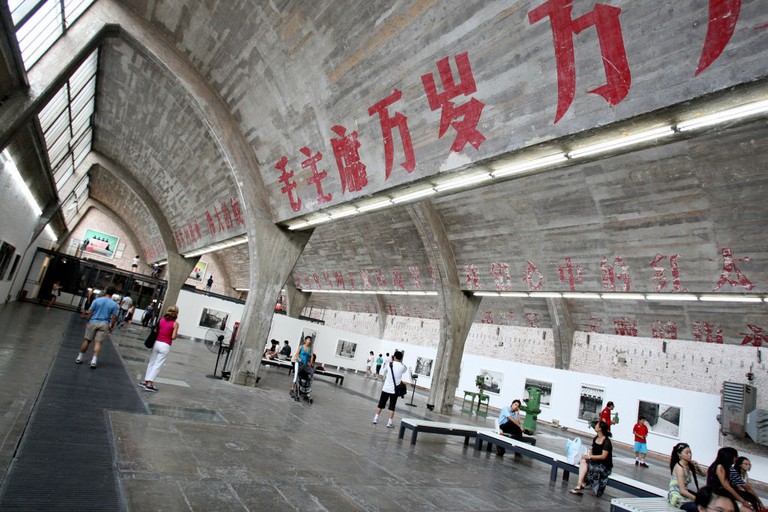 Saturated with local and international galleries, arts centres and countless cool restaurants, shops and bars, 798 Art Zone is arguably China’s most famous contemporary art district. It began life as a sprawling factory complex that made military equipment and components for the Communist cause. Most of the original buildings remain, giving this modern cultural zone – one of Beijing’s trendiest areas – a distinctly dystopian edge. 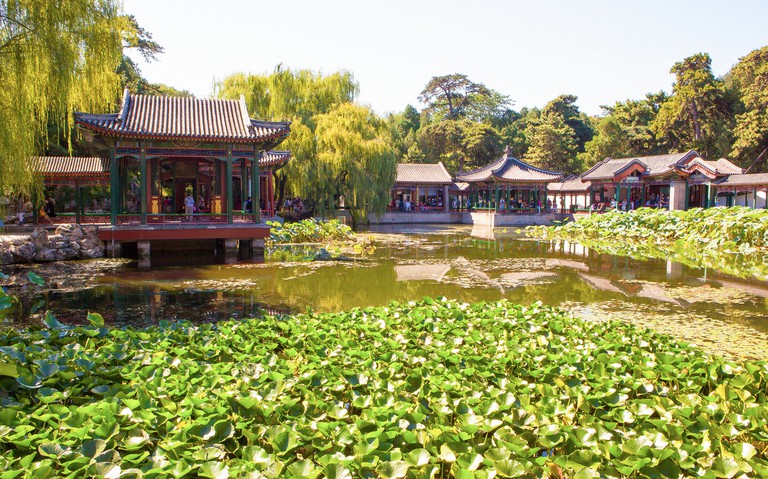 ©Tupianlingang / iStock
Book Now
Yiheyuan, also known as the Summer Palace, is an impressive complex of gardens, lakes, palaces and temples built throughout the course of many dynasties. Spreading over 290 hectares (716 acres), work started on the peaceful retreat in 1153 during the Jin dynasty, with the project finally finishing around 600 years later. Three quarters of the complex is water, and its original name, fittingly, was Qingyiyuan – Gardens of Clear Ripples. The site was given its current name in 1888 after a spruce-up to celebrate the 60th anniversary of Empress Dowager Cixi. Now, it’s a serene combination of architecture and landscaping, famous for its seamless combination of artificial constructions and natural scenery.
Open In Google Maps
19 Xin Jian Gong Men Lu, Haidian Qu Beijing Shi, 100091, China
+861062881144
Visit Website
Give us feedback 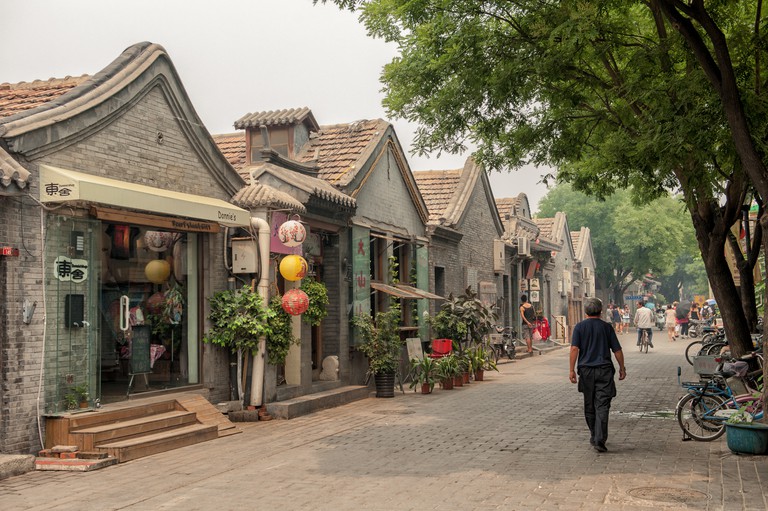 An afternoon wandering around the hutongs (narrow alleys that snake between historic courtyard housing complexes) is the best way to appreciate the beauty of old Beijing. Hutongs once dominated Beijing, but owing to aggressive urban development initiatives most have been removed. A good handful still remain around Houhai Lake and Gulou Dajie (Drum Tower Street). An afternoon would be well spent walking or cycling through the unique collection of cafes, restaurants and shops, especially around the kooky Nanluoguxiang shopping street. Be sure to stop and appreciate the ancient drum and bell towers, Gulou and Zhonglou.

The Forbidden City and Palace Museum 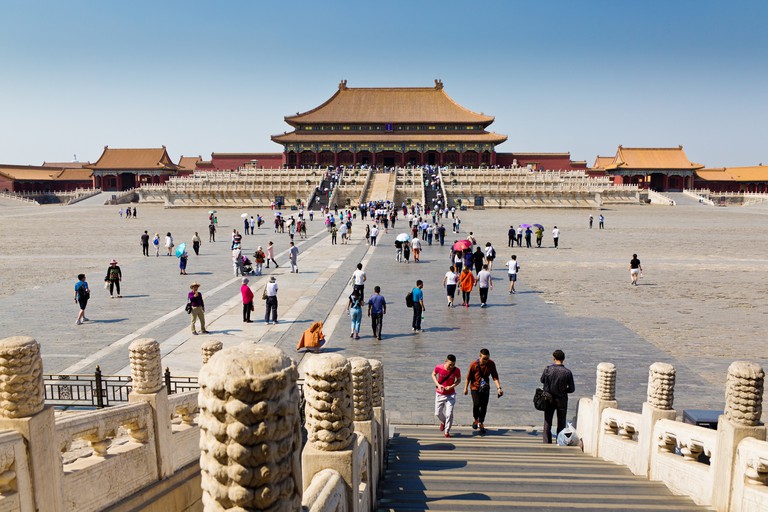 Without doubt Beijing’s most famous attraction, the Forbidden City – which presides over the notorious Tiananmen Square – is a sprawling palace complex that was home to the emperors of China’s Ming and Qing dynasties until imperialism was abolished in 1912. The great palace, dating back to 1406, exemplifies traditional Chinese architectural styles. Some of the palatial buildings now serve as the Palace Museum, which is worth ducking into to browse more than 1 million valuable Chinese art pieces, such as paintings, ceramics, jewellery and jade. Be sure to bring your passport when you visit as foreigners won’t get in without one. 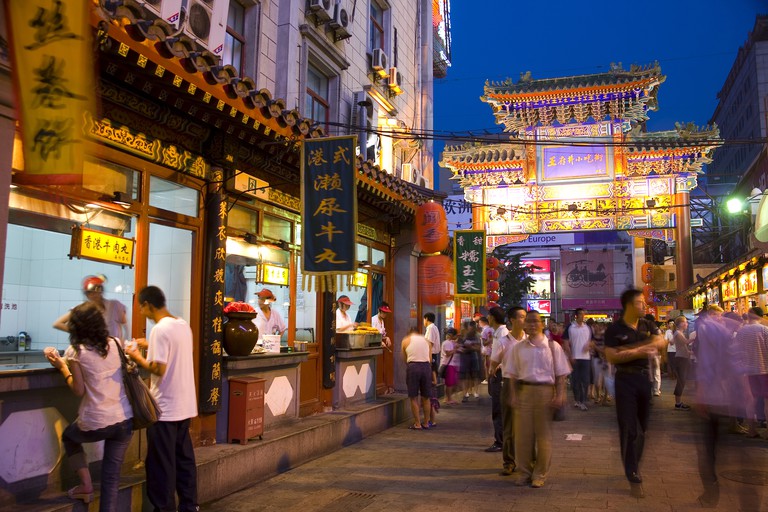 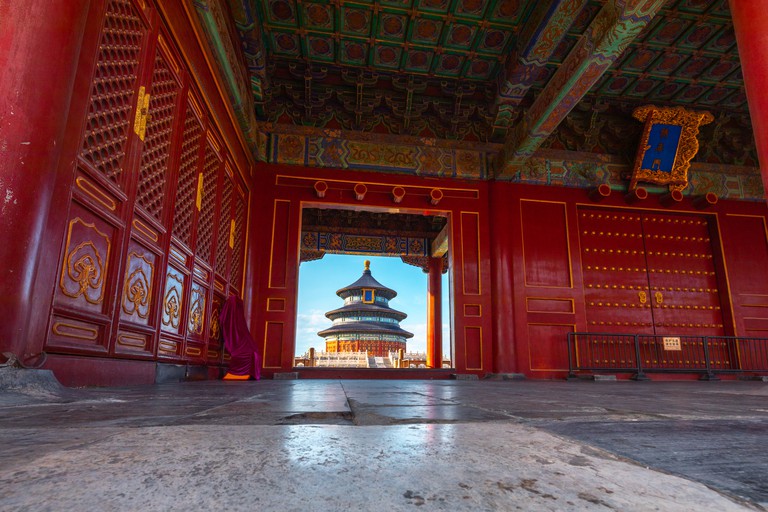 Constructed between 1406 and 1420, Tian Tan, otherwise known as the Temple of Heaven, is a complex of impressive palatial temples where the emperors of the Ming and Qing dynasties once prayed for a good harvest. The grand and solemn buildings that make up the complex – namely the Hall of Prayer for Good Harvests, the Imperial Vault of Heaven and the Circular Mound Altar – can all be toured, giving visitors an insight into the ancient religious ceremonies of Daoism. This UNESCO World Heritage Site, commissioned by the same emperor responsible for Beijing’s Forbidden City, is bursting with colourful and symbolic imagery. Go check it out. Your camera will thank you.

Open In Google Maps
Dongcheng Beijing, China
Give us feedback 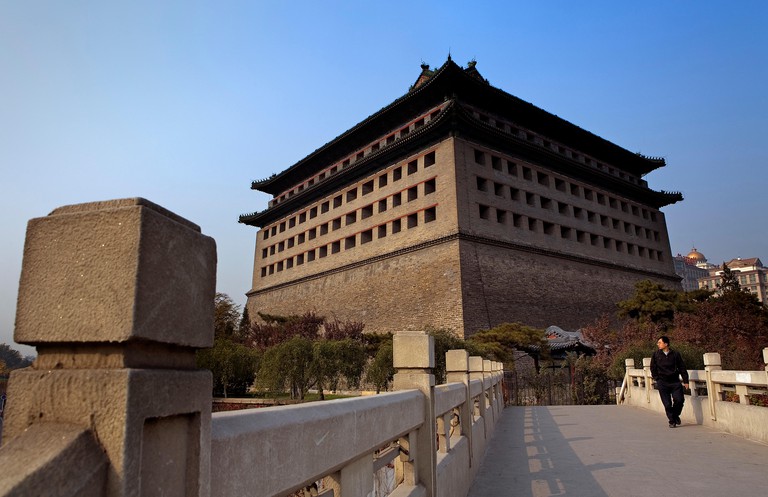 Red Gate Gallery is one of the most pioneering galleries in Beijing and the city’s first privately owned contemporary art space. On a quest to promote contemporary Chinese art across the world, it holds rotating exhibitions and often champions emerging artists, helping them to build their careers and popularity. Since opening in 1992, the gallery has become known for showcasing the best of contemporary Chinese art and can be relied upon to bring the most cutting-edge Chinese creations to the forefront of the city’s art scene. The gallery itself is also a sight to behold; it’s housed inside one of the few Ming dynasty towers to survive the destruction of Beijing’s city wall. 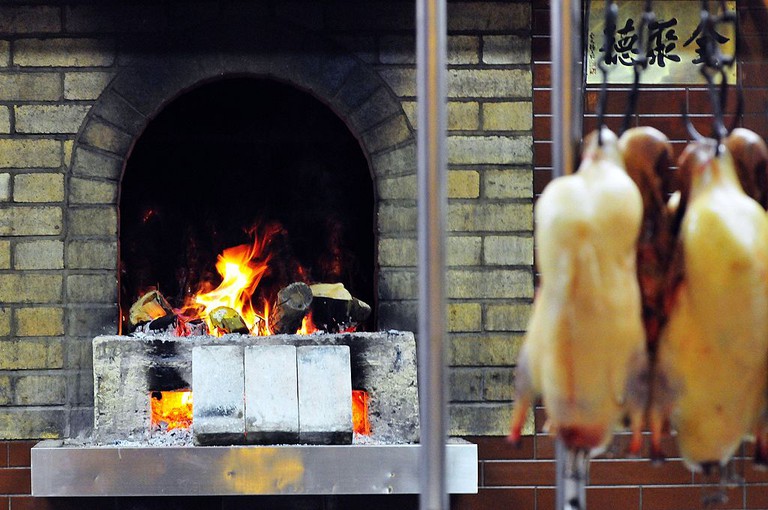 Established in 1864, Quan Ju De has a reputation for serving the best peking roast duck in China. It monitors the breeding method of the ducks very closely and adheres to traditional cooking processes to guarantee quality and taste – only using ducks which are fewer than 100 days old and weigh more than five kilograms (11 pounds). The ducks are roasted as they have been for decades in a big doorless oven fuelled by the wood of fruit trees, turning out impeccably caramelised and crisp – those with superior palates may be able to taste a subtle fruity flavour in the meat. 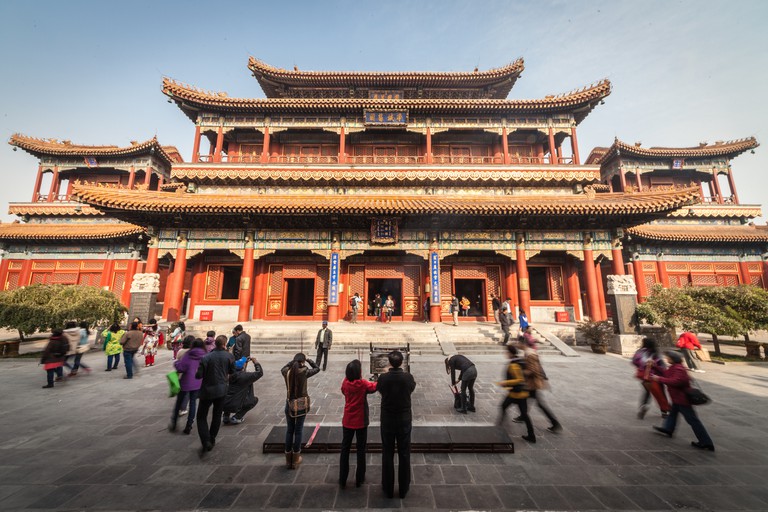 ©Juan Ignacio Sánchez Lara / Getty Images
Once the residence of a prince, Yonghe Temple, known popularly as Lama Temple, has been a working monastery since the 18th century and is one of the most revered Buddhist temples outside of Tibet. At the northern end of the historic hutong lanes in Dongcheng District, visitors can work their way through a cloud of incense and clusters of worshippers, past ever-more elaborate halls to the grand finale: an 18-metre(59-foot)-high statue of Buddha carved from a single trunk of sandalwood. While definitely a favourite with tourists, the temple is teeming with locals on auspicious occasions. Stop by the string of religious paraphernalia shops outside if you want to make an offering of your own.
Open In Google Maps
12 Yong He Gong Da Jie, Dongcheng Qu Beijing Shi, 100028, China
Give us feedback 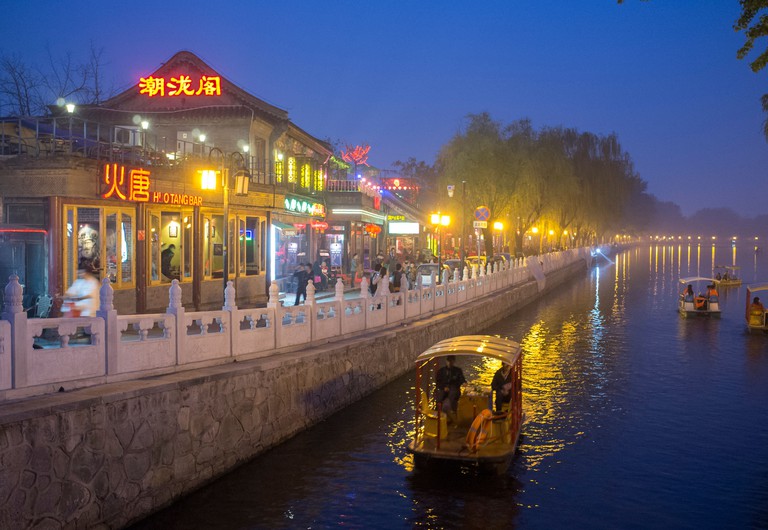 Part of a complex of the three northernmost ornamental lakes in Beijing known as Schichahai, Houhai was built for the pleasures of the royal Yuan family (1271-1368). Today, it is buzzing with activity from early morning to midnight, with street-side haircuts, cheap pencil portraits, al-fresco jam sessions and electric boat rides offered during the day, evolving into loud karaoke bars, fragrant street snacks and neon headgear at night. The streets around the adjoining Qianhai Lake get particularly packed on evenings and weekends, so approach with caution if you’re not a fan of crowds. Explore the majestic Gulou (drum tower) and Zhonglou (bell tower), just a few steps east, while you’re in the neighbourhood. 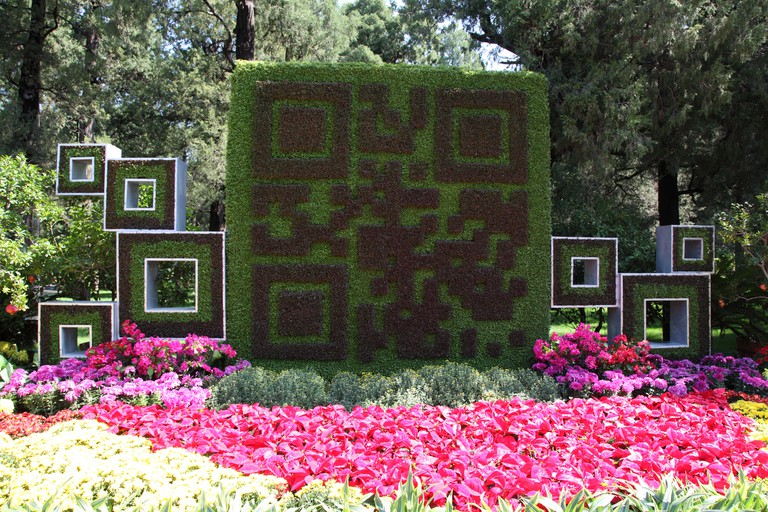 Situated at the geographical centre of Beijing, Jingshan Park served as a royal garden and hunting ground during the Yuan, Ming and Qing dynasties, complete with fruit trees, pretty pavilions and ornate palaces. It was opened to the public in 1928, providing 57 acres (23 hectares) of landscaped gardens and traditional Chinese architecture, but its unrivalled views are the real reason to visit. Take the short climb up Jingshan Hill and find yourself at the highest point in otherwise flat Beijing, a unique vantage point which looks out over the north gate of the Forbidden City. 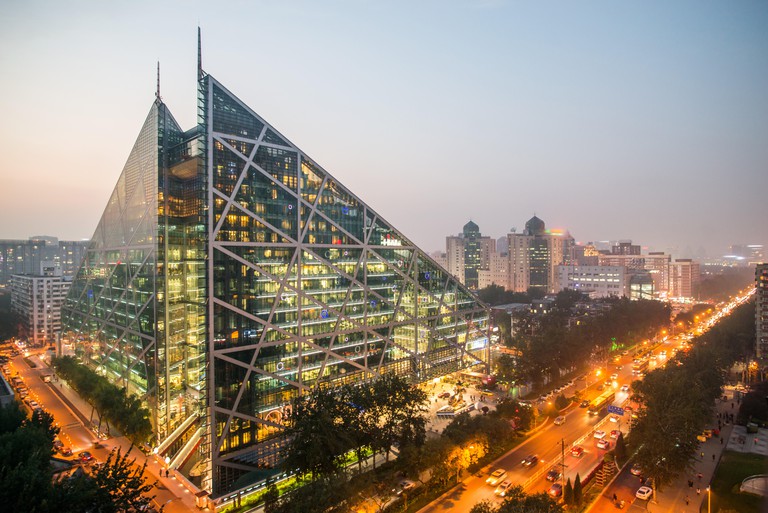 Parkview Green is a Chinese mall like no other. The winner of multiple green architecture awards, this forward-thinking lifestyle complex sits beside historic Ritan Park and Beijing’s tree-lined diplomatic zone, and it’s packed with shopping, dining and contemporary art. Peruse boutiques and look for touchable sculptures in between exploring the art gallery, art museum and in-mall interactive offerings. Those who really can’t get enough should consider staying at the super-chic on-site boutique art hotel. 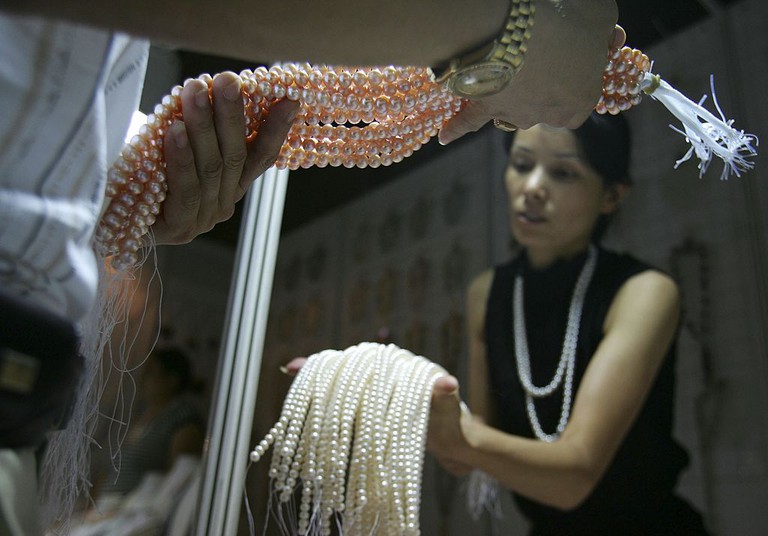 ©Cancan Chu / Staff
Calling all bargain hunters! Set opposite Tiantan Park in Beijing’s eastern Dongcheng district, Hongqiao Market, also known as the Pearl Market, is a treasure trove of genuine pearl jewellery and less-than-genuine everything else. Former British Prime Minister Margaret Thatcher is said to have stocked up on pearls here three times, but whether or not she took advantage of the incredibly convincing knock-off handbags, watches, clothes and electronics is unknown. You’ll probably work up a good appetite haggling (which is essential here), so head on down to the basement food court for some satisfying cheap eats if needed.
Open In Google Maps
Dongcheng Beijing, China
+861067133354
Visit Website
Give us feedback

This article is an updated version of a story created by Katherine Lee.