The Heartbreaking Photos of Lu Nan: Depicting a Forgotten People

Modest, reclusive and deeply committed to his craft, the images of documentary photographer Lu Nan leave an enduring impression on viewers. A Chinese native himself, Lu Nan captures scenes of marginal, often suffering groups, like neglected psychiatric patients or the oppressed Catholics of a tightly monitored, secular China. Though the man himself is elusive, his heartbreaking and highly poignant photographs can be viewed at Australia’s White Rabbit Collection. 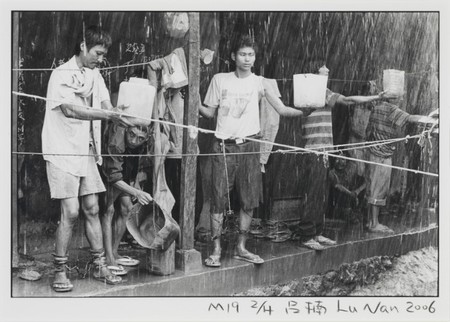 No.19 Washing Line | © the artist and the White Rabbit Collection

Unlike what happens with some Hollywood actors, music stars or contemporary artists, it is rare to find a photojournalist with a personality so exuberant that it shines brighter than their own work. Photojournalists are usually moderate, down-to-earth individuals; but Lu Nan, 47, arguably the greatest Chinese documentary photographer, is more than simply a discreet person. So little is known and seen of him that if it weren’t for the testimony of his photography, his very existence might be doubted. Lu avoids participating in public occasions with great care, including exhibitions of his own work; rarely gives interviews, and couldn’t care less about having pictures taken of him taken. Furthermore, the photographer often uses fake names to sign his works, is reported to be a loner, and has the eccentric habit of disappearing for up to three or four years. No one knows where he goes, but ‘We don’t worry about him. He’s healthy and can take care of himself,’ his friends say.

If the man is shifty and elusive, his photography strikes lasting impressions. Lu Nan is best known for a trilogy of works made over a span of fifteen years, between 1989 and 2004, during which time he visited and documented some of the most unfortunate communities in Asia, and brought back grim images of hopelessness which haunt and inspire compassion in the viewer. The first of these three works, The Forgotten People, is an investigation of the state of Chinese psychiatric wards, on which Lu Nan worked between 1989 and 1990. Possibly his strongest work to date, The Forgotten People is a journey through human misery. In the images, men and women of all ages, children included, are seen lingering in the institutions that host them, clearly malnourished and lying on wooden planks, some in chains. More harrowing than the appalling conditions they live in is the sensation of being in front of broken lives, individuals condemned by an ungrateful fate to an inescapable future of grief. 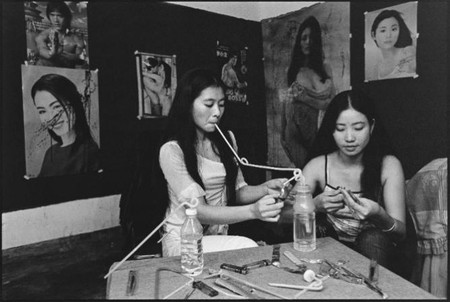 No.1 Women Smoking Opiates | © the artist and the White Rabbit Collection

From 1992 to 1996, Lu Nan devoted his efforts to the minority of Chinese Catholics. In the early 1950s, the Communist party banned the profession of all religions in China; and during the Cultural Revolution, ignited by Mao Zedong in 1966, religions were outlawed altogether, practitioners persecuted and believers prompted to become atheists. Sacred sites were either destroyed or converted for governmental or military purposes. In those years, an underground community of Chinese Catholics emerged that refused to give up their beliefs and secretly kept professing their faith in God. Even today, despite the end of the Cultural Revolution, Catholic churches are under the State’s supervision and prohibited to have relationships with the Vatican. The second part of Lu Nan’s trilogy, On the Road: The Catholic Church in China, impresses with the manifestations it depicts of authentic faith from these believers. Deprived of churches or any other public location in which to come together freely, the Catholics gather in the countryside or inside their homes, pray on their knees in front of humble crosses, read the Bible in the light of candles, and stubbornly cling onto their undying love for God despite the government’s opposition. In a time where spirituality is deeply shaken by the materialism that has affected the world, China included, Lu Nan’s images provoke thoughts that reach far beyond the factual conditions of Chinese Catholics.

For the last part of his trilogy, The Four Seasons: Everyday Life of Tibetan Peasants, Lu Nan spent no less than seven years in Tibet, documenting the great amount of strenuous work Tibetans have to undertake around the year to harvest the fruits of their land. In striking contrast to modern lifestyle standards, Lu’s pictures show how the lives of Tibetan peasants largely — and necessarily — revolve around one basic need that in most parts of the world is taken for granted: that of providing food for themselves. While less gripping than The Forgotten People, The Four Seasons shares with that earlier work a reflection on how factors outside of human control — mental illness in the former, geographic origin in the latter — heavily and even tragically determine the destiny of those affected; but they also beg the question of what the rest of us can do to help them alleviate their burdens. 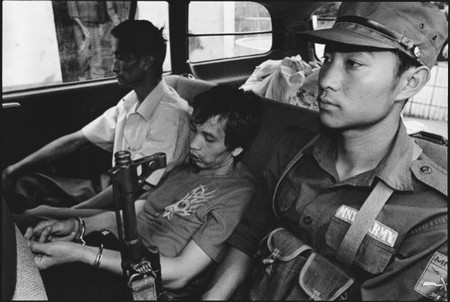 No.5 Arrest | © the artist and the White Rabbit Collection

Among Lu Nan’s most recent works, his reportage of the daily life of inmates in Myanmar’s Yang Long Zhai prison camp, where Lu lived from June to September 2006, certainly stands out. Yang Long Zhai’s prisoners are mostly incarcerated for drug use and enter the camp while still victims of the addiction. Because, of course, they quit drugs cold-turkey, the first few weeks they experience excruciating suffering as their bodies try to adjust to the abstinence from toxic substances; all the while, they are not provided with any medical assistance to help them tolerate the pain. But Lu Nan helped a few of them with the medicines he had brought along for himself: this was key in gaining the inmates’ trust. Soon, the Chinese photographer was able to stick around the prisoners and take pictures of them without them worrying about him or his camera. The result is a truly authentic, unique work with an exceptional documentary value, yet another descent into a world we do not want to see. 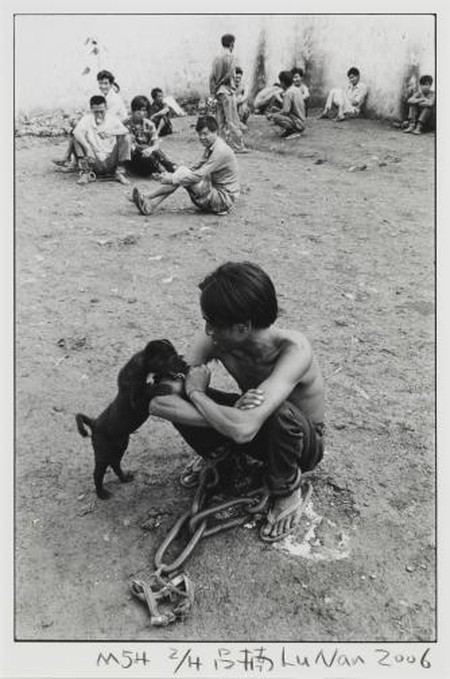 No.54 Boy with Dog | © the artist and the White Rabbit Collection

Today, Lu Nan is the first and only Chinese photographer to have been welcomed into the prestigious Magnum Photos agency. Founded in Post World War II by celebrated masters Henri Cartier-Bresson and Robert Capa (along with David Seymour and George Rodger), Magnum is considered the Mecca of photojournalists. Becoming a Magnum photographer is equal to what it means to win the Olympics means for an athlete. Yet, it seems fair to assume that Lu Nan may have applied for no other reason than to seek financial support for his work. It wasn’t fame he was looking for: ‘Publicity is meaningless for an artist. If the pictures are good, it doesn’t matter who took them, and if the pictures are not good, it also doesn’t matter who took them’. A humanist photographer, Lu Nan is deeply committed to showing us fragments of society removed from the collective consciousness, men and women left behind by the greedy quest for wealth, nagging thorns in the side of the illusion that our world is equal, and we all enjoy the same rights.

Founded in 2009 by the Neilson Foundation, the White Rabbit Collection exhibits the best of Chinese contemporary art produced since 2000. The gallery, Located in Chippendale, Australia, is one of the best places to view Lu Nan’s work.