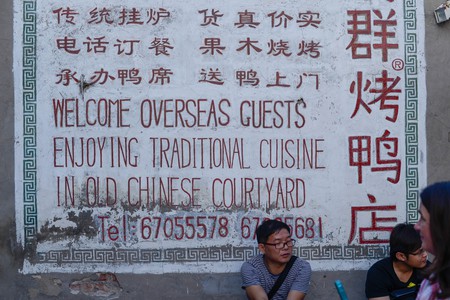 The hutong alleys are the best place to see and feel Beijing’s authentic culture, and they are also home to many Beijing’s hidden delicacies. While it takes time to look for the restaurants by yourself, we make it easier by rounding up the best hutong restaurants for you.

Stuff’d says it has “Beijing’s finest hand-made sausages”, and once you’ve tried them, you’ll know why. It’s adjacent to the Arrow Factory Taproom, so you’ll be able to enjoy the German sausages along with local craft beers. During the cleanup of ‘holes in the wall’ restaurants in Beijing last year, the front of the Stuff’d was blocked, but don’t mistake it as being shut down – life still goes on behind the bricks.

It’s almost impossible to discover Susu by chance, because from the front, it looks like an ordinary hutong home. But once you walk inside you’ll be surprised by its seats that rest in the shadow of the big tree. Susu specializes in Vietnamese food, with a little influence from Chinese and French cuisines in its dishes.

Open In Google Maps
Dongcheng Beijing, China
Give us feedback

Named after the priced spice saffron, the key ingredient of Spanish paella, the restaurant that hides in Wudaoying Hutong specializes in Spanish food. Customers say that the restaurant has Beijing’s best paella – the perfect place for homesick Spanish expats and those who want to remember their Spanish holiday.

Liqun was opened by former Quanjude chef Zhang Liqun in his own courtyard. Here you can try a dish equal to the most famous Peking Roast Duck brand Quanjude, while immersing yourself in the atmosphere of a traditional Beijing hutong family. The simple interior décor makes the restaurant look like a home from the 1980s.

Restaurant, Chinese
Facebook
Email
Twitter
Pinterest
Copy link
Share
Map View
Miancha is a traditional Beijing thick porridge made of millet and rice flour. If you ask locals where to find the best miancha, they won’t give you the big names like Huguosi Snacks, but instead, they will point you to the small miancha shop in Daxing Hutong that doesn’t even have a name board. There’s an old saying in Chinese: “酒香不怕巷子深 (translated as ‘good wine is not afraid of deep alleys’), which fits this shop perfectly.
Open In Google Maps
7 Da Xing Hu Tong, Dongcheng Qu Beijing Shi, China
Give us feedback

The restaurant is known for its special tom yum styled fish in hot and sour soup, homemade tofu and also homemade rosé and osmanthus (cassia) wine. The restaurant’s yard is filled with greenery, and you’ll be dining on the ‘tables’ that are actually bass drums. It’s hard to find a better restaurant than this for summer time in Beijing.

No, it’s not a restaurant that features orchid dishes, but one that has Beijing’s best pig feet hotpot. Boiled pig’s feet is a very popular dish among Chinese women for it is believed that the ingredient can maintain beauty. Don’t worry if this dish doesn’t appeal – the restaurant has many other kinds of hotpot if you are not a fan of pig’s feet!

This small restaurant that hides in a hutong alley near the Beixinqiao subway station is one of the best places in town for grilled mutton. The super-tender mutton supplemented with Beibingyang frizzy orange beverage or Meng Shan beer is an ideal pairing that few customers of the restaurant will ever forget once sampled.