The 10 Most Interesting Things To Do And See In Lujiazui, Shanghai

Lujiazui is the central business district of Shanghai and one of the financial powerhouses of China. Best known for its remarkable skyline of shimmering skyscrapers (the world’s second tallest building included among them), Lujiazui is home to countless high-end restaurants and hotels. A traveler could spend an entire week just in this area of Shanghai, and The Culture Trip has compiled a list of the 10 best things to do and see here.

Standing 468 meters (1,535 feet) high, the Oriental Pearl Tower was the tallest building in China from 1994 to 2007, when it was surpassed by the Shanghai World Financial Center. The Oriental Pearl has a distinctively large antenna which broadcasts TV and radio programs, as well as fifteen observation levels, with the highest – the “Space Module” – at 350 meters (1,148 feet). Most of these observation levels have glass floors, much to the delight and terror of visitors. The Space Hotel and revolving restaurant – located between the tower’s lower two spheres – offer spectacular views of Shanghai and countless exhibition halls adorn the bottom levels. 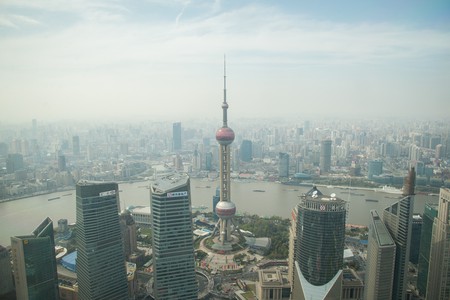 Claiming the spot for the world’s eighth largest building when it was opened in 2007, the Shanghai World Financial Centre is an impressive 492 meters tall (1,614 feet). It’s trapezium shaped opening at the top makes the building resemble a bottle opener. The observatory on the top floor has glass floors and windows, offering a 360-degree view of the city. The Park Hyatt Shanghai is nestled between the 79th and 93rd floors. Offices occupy most of the higher floors, with shops and restaurants lining ground level. 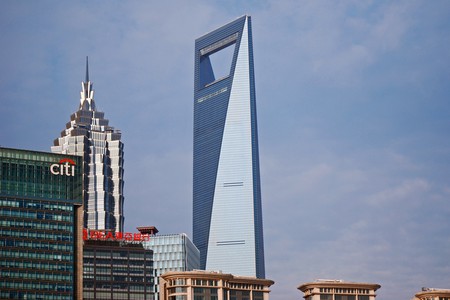 Some traditional Chinese culture elements are evident in the design of this skyscraper, starting with its name, “Jin Mao,” which translates directly to “Golden Prosperity.” All of the proportions of the structure are focused around the number 8, which is a very lucky number in China (in Mandarin, “eight” sounds very similar to “prosperity”). The building has 88 floors, with the lower 50 as offices, and the upper 30 occupied by the five-star Grand Hyatt Shanghai Hotel. Boasting a jazz club (The Piano Bar), a fitness club, and a wide selection of high-end bars and restaurants, there is no shortage of entertainment and fine dining in this colorful tower. 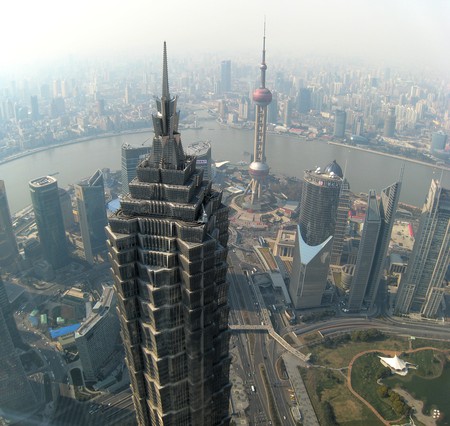 It’s sometimes difficult to find a little peace amongst the hustle and bustle of downtown Shanghai. Luckily, the Lujiazui Central Green Space is a perfect spot to relax and enjoy the outdoors. Large fountains and white canopies are scattered across the 22-acre green space, making it a popular location for wedding photos and picnic dates. However, despite the serenity and romanticism of the space, it is not completely removed from the city – photographers may capture an excellent view of the Jin Mao Tower and the Shanghai World Financial Centre from here. 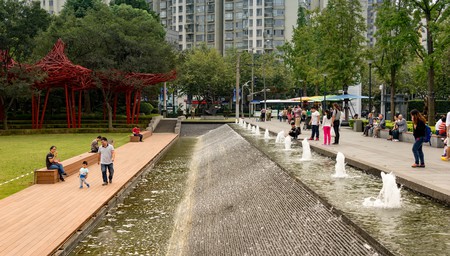 Binjiang Avenue runs along the riverside on the eastern shore of the Huangpu River. It provides spectacular sightseeing opportunities of the Shanghai International Convention Centre as well as other structures. The avenue stretches a total length of 2,500 meters (8,202 feet) and faces the Bund. Benches line sections of the avenue to allow tourists a well-deserved rest after a long day of sightseeing, many of whom partake specifically at dusk to watch the sun set over the Huangpu River. 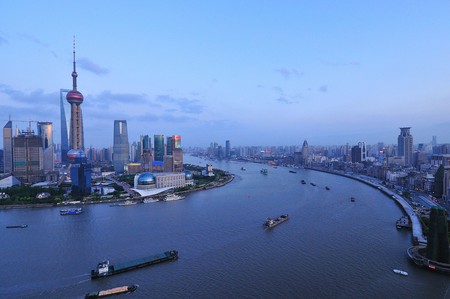 The Waitan Sightseeing Tunnel travels 647 meters (2122 feet) under the Huangpu River, connecting the Bund on the western bank to Lujiazui on the eastern. Visitors board glass-windowed trams and travel through a trippy sci-fi-esque tunnel, outfitted with lasers and others audio-visual effects. Despite being slightly bizarre (OK, very bizarre), the Sightseeing Tunnel provides a quick and convenient route between Puxi and Pudong, and is definitely something worth experiencing once. 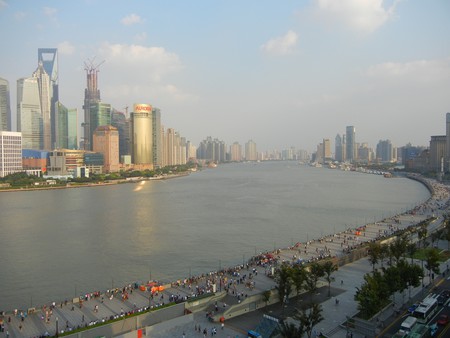 The Shanghai Ocean Aquarium is a wonderful place for families with young children (but adults are also welcome!) A 120 meter (390 feet) tunnel takes visitors on a tour through coastal reefs, open ocean, kelp caves, shark coves, and even a coral reef. Tens of thousands of rare fish, including emperor penguins and albino sea basses, are displayed in themed exhibition areas. Visitors are allowed to observe these lovely sea creatures during feeding times, and scheduled shows are a big draw for the younger children. The gift shop on the way out offers adorable ocean-themed gifts. 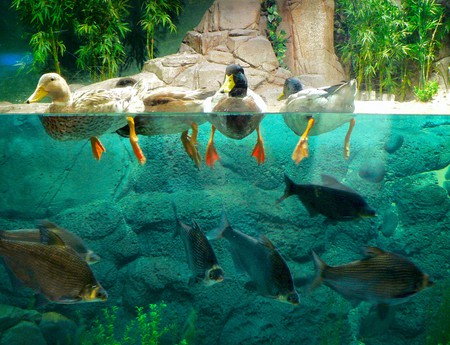 The Aurora Art Museum houses an impressive display of ancient Chinese artifacts, including pottery, jade, porcelain, as well as sculptures dating back to the Qing Dynasty. The museum itself is modern and sleek, and hosts both permanent and special exhibitions in its multi-leveled structure. The museum is definitely worth for those with an interest in Chinese culture, or for art lovers more generally. 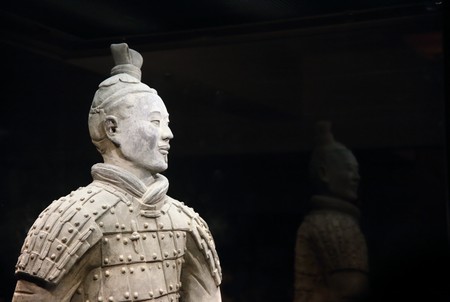 Covering a total floor space of approximately 110,000 square meters (118,4030 square feet), the Shanghai International Conference Center is the most high-tech and advanced exhibition facility in all of China. It boasts well-equipped art convention and meeting rooms, function halls, and nearly 300 guest rooms. There are also numerous options for fine dining, shopping, and entertainment, including a gorgeous ballroom and bowling alley. The Conference Centre also offers package deals for event coordinating and stage design. 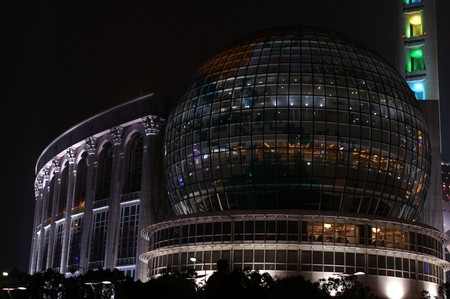 The International Finance Center is a high-end shopping mall, office, and hotel complex split between two – north and south – 250 meter (820 feet) towers. The Ritz-Carlton Hotel is situated in the southern tower, while the Shanghai HSCB is headquartered in the northern. The shopping centre includes all of the world’s most well-known fashion brands, a Western-specialty goods supermarket (CitySuper), and a multi-screen cinema. Numerous dining options are also available in the complex, from fast food in the food courts, to fine dining in the upper levels. 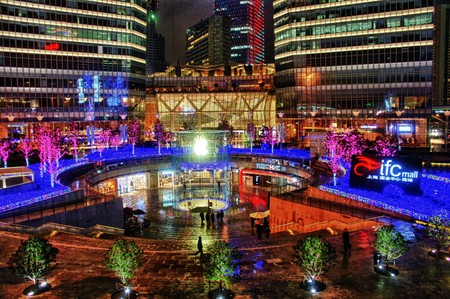