The 10 Best Kung-Fu Films of All Time 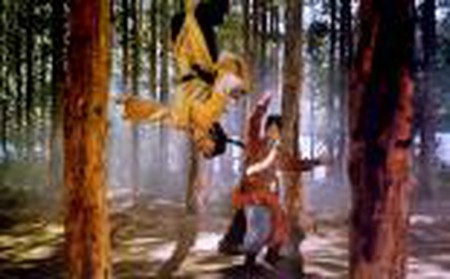 There are two types of kung fu films, just as there are two types of kung fu film fans: the serious (and often seriously stunning) fighting film whose biggest battle is often with the laws of physics, and the madcap adventures with tongue firmly in cheek. Rather than have them fight it out kung fu style, this list will highlight the best examples of both from China, and international movies influenced by martial arts films.

A quietly revolutionary piece of cinema. Not only does it do seemingly impossible things for the genre like have a fully developed love story and pass the Bechdel test with honours (the females not only have full conversations not about men but also have all the quickest fight moves), but combines its fast fights with stunning a prosaic fights as Chow Yun Fat chases sword thief and his would-be apprentice Zhang Ziyi through the treetops. Somehow manages to make the kung fu film contemplative and subtle in its look at desire, heritage and loyalty.

If Crouching Tiger Hidden Dragon is the composed and contemplative yin, then Kung Fu Hustle is its berserk, anarchic yang. Defying genre in its violent, complex and awe-inspiring set pieces, it tells the story of…well, it often does not matter, as the viewer is taken from one strange scene to another in a cartoon rampage of fighting featuring, amongst other almost Buñuel-like scene, a man being bitten on the face by multiple snakes. Also significant is that the film bring out of retirement many great actors from the genre’s past, neatly tying together the genre’s past and future

Inspired by the life of Bruce Lee’s martial arts master Yip Man, for a kung fu film this is almost a work of social realism, documenting the struggles of the Japanese invasion of China in 1937 upon the Man household. Forced to work in a coal mine, the unassuming Ip Man (Donnie Yen) enters a martial arts tournament to investigate the death of a friend and to win rice for his starving family. With its interest in worker’s conditions combined with its fight scenes think of this film as the On the Waterfront of kung fu films, albeit an On the Waterfront where the main character can also dish out legendary fight prowess, at one point against ten competitors at once.

Any list naming the best kung fu films must include one by the genre’s greatest living export, Jackie Chan, and Police Story is the one the actor and director considers to be his finest, creating a slew of sequels and allowed him to gain attention from the film world outside of Hong Kong for the first time. It is a fairly standard tale of one cop’s fight against a drug lord, with Chan trying to protect the kingpin’s girlfriend who has promised to testify against him. However, the action is heightened by some stunning stunts, one of which nearly killed Chan as he fell through a glass canopy and even stopped breathing.

Another film by Chow, and one even more insane than Kung Fu Hustle. In fact, it may be the craziest on the list, no mean feat for a top 10 featuring Enter the Dragon. However, it is revitalised the international interest in the weirder side of the genre. In a knowing reference to this, Chow plays a Shaolin monk who, finding there is no longer much need for this discipline, joins a soccer team to try a win a $1 million prize. But no one is coming to this film for its plot, with the sports scenes amongst the most inventive and arresting choreography in the whole kung fu canon.

Before Woo was tempted over the pond to make mediocre action films like Mission: Impossible II and Face/Off, there was The Killer, Woo’s tribute to the classic Jean-Pierre Melville film Le Samouraï inspired by the Western kings of violence like Scorsese, Leone and Peckinpah. Chow Yun-Fat plays an assassin who is forced to do one last hit to save the sight of a girl singer he nearly blinded in a restaurant shoot-out. It is a tight combination of frenetic action, doomed romance and style, and a film cited by many as the greatest action film of all time.

A Touch of Zen

This epic tale of political intrigue and military strategy is significant to the history of the genre for being the first ever Chinese-language film ever to win a prize at a major western film festival, claiming a technical prize at Cannes, and beginning a process that led to films like Crouching Tiger, Hidden Dragon (which was clearly influenced by this film,) winning Oscars aplenty. But this film is more than just a token, for it is worth watching on its own for its compelling story of a portrait painter drawn into a world of sinister dealings through a beautiful newcomer to his neighbourhood.

Enter the Dragon was the last ever film featuring kung fu’s greatest ever star, Bruce Lee, and the first ever funded by a Hollywood studio. More than that, though, it is a weird combination of completely bizarre moments (Lee’s final battle is with a man with a modified bear claw for a hand, and the film features the worst New Zealand accent ever committed to film) and oddly impressive cinematography referencing Kubrick and even Battleship Potemkin. The last fight in the film, set in a mirrored room, would not look out of place in a Palme d’Or winner, and yet comes at the end at one of the kitschiest experiences in film, and it is this sort of juxtaposition that make this film so compelling.

Tarantino’s fourth full film is the equivalent of putting the kung fu genre in a blender. The director calls it his ‘Eastern’ film, the prequel to his ‘Western’ Kill Bill Vol. 2, and in typical Tarantino style it is bursting at the scene with cultural tropes from these films, from Uma Thurman’s catsuit (an homage to one worn by Bruce Lee) to an extended anime sequence to the cameo by Japanese band The 5,6,7,8s, whose ‘Woo Hoo’ acts as the soundtrack to the blood-drenched final showdown between The Bride (Uma Thurman) and O-Ren Ishii (Lucy Liu). A film as spectacular as it is gore-splattered.

Keanu Reeves swaps surfing for saving the world as he breaks out of the virtual ‘real’ world and enters the matrix, with a good amount of fighting the corporate clones in between. After years of imitations paler than the twins in The Matrix Reloaded, it is easy to forget how innovative its so-called ‘bullet time’ effects were, and how incredibly influential they were on all action films and especially martial arts films (and indeed some other films on this list…) ever since. The Matrix is the nearest that Hollywood has got to a martial arts masterpiece, and still holds strong even 15 years on from its release.