Starbucks’ Rapid Expansion Is Changing How Chinese Millennials Get Their Caffeine 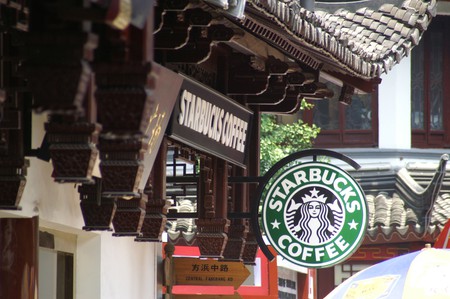 Instead of the more-traditional tea, younger Chinese city-dwellers are turning to trendy coffee as their preferred pick-me-up.

Last week, the New York Times reported that global coffee chain Starbucks is opening more than 500 new stores a year in China, and adding upwards of 10,000 jobs each year there. Shanghai, it reports, already has more than 600 Starbucks stores—about twice as many as in New York City.

The company bought out its partner in its Chinese operations in a $1.2 billion deal and detailed ambitious expansion plans in the country. “I do believe it’s going to be larger than the U.S.,” Howard Schultz, Starbucks’s chairman, told the Times regarding the company’s potential in China.

Now, Bloomberg says that the chain’s rapid expansion is changing the caffeine consumption habits of Chinese millennials. Tea, of course, is the beverage most commonly associated with China, and it’s still the most popular drink there. But many younger urban residents have switched to coffee as their drink of choice. The implication is that it’s a social signifier; as a trendy western beverage, it indicates a certain level of affluence and taste in this nation with a rapidly expanding middle class. Plus, coffee shops are great places to hang out with friends, and more comfortable than tea houses, Bloomberg quotes Chinese 20- and 30-somethings as saying.

Tea currently still outsells coffee by about 10 to one, Bloomberg says, but it’s estimated that demand for coffee has increased by about 16 percent a year over the past decade, far outpacing the rest of the world, which has grown at a rate closer to 2 percent. Coffee consumption is expected to keep growing at a fast rate and may eventually surpass that of tea. The current growth mimics what happened in Japan in the 2000s, Bloomberg notes; what was previously a primarily tea-drinking nation is now the fourth-largest coffee consumer in the world. Other chains are getting in on this, too; Dunkin’ Donuts, for example, hopes to expand its brand to more than 1,400 locations over the next two decades, up from 34 currently in China.

Even in this early state, the Chinese coffee market is a $1.1 billion industry, reports Bloomberg. It’s dominated by Nestle, selling largely instant coffee drinks (which account for 90% of current retail sales), but that’s expected to change as consumers’ tastebuds grow more sophisticated and they start seeking out more expensive and refined coffees.

We can’t wait to see the Chinese version of a Unicorn Frappuccino.