It may not come as a surprise, but there really is something for everyone this summer in Shanghai. From art installations to music festivals, every street comes alive with culture around this time, with the city’s famous Tourist Festival meaning everywhere showcases their finest exhibitions, performances and experiences for the massive and varied crowds. Join them, and discover the most exciting season of all in China’s cultural capital. 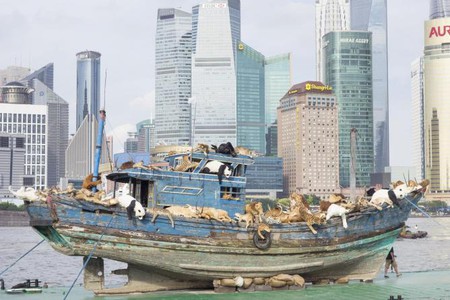 Art Gallery, Theatre
Facebook
Email
Twitter
Pinterest
Copy link
Share
Map View
26 – 27 July A new performance of a Beckett play is always remarkable in itself, with his estate holding tight control over who does or does not get to perform the great man’s work. However, this one is a particularly crucial watch; not only are three plays being performed, but also this is the first time ever that ‘Play’, ‘Footfalls’ and ‘What Where’ will be performed in Chinese. Come to see how well his tales, of three heads in urns talking of their lost love triangle, a haunting woman in turn haunted by her mother, and a strange interrogation in the void, translate into a language they have never been told in before. Qianshuiwan Culture Center, 179 Yichang Road, Shanghai, China,
Open In Google Maps
Shanghai, China
Give us feedback

Art Gallery
Facebook
Email
Twitter
Pinterest
Copy link
Share
Map View
8 August – 26 October In what is the Power Station of Art’s first solo exhibition by a living artist, the gallery presents the work of the America-based, Chinese-born artist Cai Guo-Qiang. The show wishes to bring attention to what the artist sees as a crucial time in the environmental crisis. Inspired by the horrific incident in 2013 of 16,000 dead pigs being carried by the tide of the Huangpu River, the show ceremonially began in mid-July, with the artist bringing The Ninth Wave, a boat manned by a crew of figures of dying animals, across the same river to the gallery, and the eponymous exhibition looks set to continue in the same grand scale through eleven new works, including another of his famous gunpowder works.
Open In Google Maps
Shanghai, China
Give us feedback

Another first for Shanghai comes courtesy of the Shanghai Grand Theatre, who are bringing their 2014 ballet season to a close in stunning fashion with this gala, featuring many leading lights of international dance who have never performed in Shanghai before. Chief among these is the Bolshoi’s prima ballerina Svetlana Zakharova, but also performing are principals and soloists from Germany, Austria, the Netherlands, the United Kingdom and Shanghai’s own Shanghai Ballet. All of these and more will be performing in this one night only show, which has been intriguingly titled Baiser Volé, or ‘stolen kiss’.

Joseph Graves (the co-founder of the Institute of World Theatre and Film at Peking University) brings his one-man show about his own Shakespeare-obsessed English teacher to Shanghai after ecstatically reviewed shows in Beijing; in fact, Time Out went so far as to say ‘Take the day off of work, change your holiday plans,reschedule your wedding, but don’t miss this show’. It is easy to see why it received such praise, with Graves seamlessly moving from comedy to haunting tragedy in mere moments. Find out for yourself this August whether these reviews are much ado about nothing or not when it finally comes to Shanghai.

Every year, eight million people visit Shanghai for this festival, taking place across 20 days in countless locations across the city. If the grand, awe inspiring floats, food, festivals and fireworks are not reason alone to visit, every major gallery and museum offers half price entry throughout the entirety of the festival, as well as many tour companies and hotels offering deals, meaning there is no reason not to see and experience everything the city has to offer during this time, from the famous Shanghai International Musical Fireworks Festival to the smallest, most hidden away treasures of the world’s most populated city.

Everyone from Andrea Bocelli to Beyoncé has graced the stage of this, the only state-run culture festival in China. Coming at the tail end of the Tourism Festival, the China Shanghai International Arts Festival presents a whole month of the world’s greatest music, drama, dance, and whatever other cultural discipline which can be thought of from all over the world. However, the festival is not all about the big names (although there are plenty of them performing,) with the stages showcasing local performers big and small attracting so far attracting 18 million visitors over its thirteen successful years.

The organizers call it the ‘Happiest 5k on the Planet’, and it is certainly the most fun, with all participants beginning in white and being doused in colors at every kilometer, followed by further paint and a party at the 5k finish line. Last year, in 2013, over a million people took part across The Colour Run’s six China Locations, making it the biggest event series in all of China, and this year looks to be even bigger, with more runners, a bigger party, and, of course, much more paint! And with no race times recorded, you can focus on the fun rather than worrying about personal bests and finish positions.

Park
Facebook
Email
Twitter
Pinterest
Copy link
Share
Map View
1 – 3 October October is the unofficial month of the music festival in Shanghai, and this month of music begins with the Midi Festival, one of the biggest of them all with 80,000 visitors every year journeying to the Sanjiagang Beach Park to hear three days of the best national and international pop and rock music. This year’s Shanghai headliners and line-up have not been named, but seeing as this year’s Midi in Beijing was headlined by Britpop legends Suede, performing in Beijing for the first time in two years, expect big names from around the world and from China itself.
Open In Google Maps
Shanghai, China
Give us feedback

Nightclub, Chinese
Facebook
Email
Twitter
Pinterest
Copy link
Share
Map View
5 – 6 October Although only in its second year, Storm Festival has already become the prime destination for dance music in Shanghai, with a world-famous line-up of international DJs known from a million nightclub nights. Although it also boasts a to be announced lineup of more experimental electronic acts, the big draws for many will be its main stage headliners, which include Avicii (who will be hotly anticipated after he was forced to cancel his last Shanghai appearance in late 2013), as well as his fellow Swedes Afrojack and Axwell. Essentially, the festival is set to be an EDM dream.
Open In Google Maps
Shanghai, China
Give us feedback

Park
Facebook
Email
Twitter
Pinterest
Copy link
Share
Map View
18 – 19 October For those with more traditional, less frenetic tastes, Shanghai’s premier jazz, blues and funk festival is back for another year. Although the line-up is still being closely protected, persistent rumors claim James Brown/Parliament/Funkadelic bassist Bootsy Collins, a legend whose signature sound can be heard on records as varied as many 2Pac singles and ‘Groove is in the Heart’ by Deee-Lite, will be bringing his trademark star sunglasses to Shanghai for a headline slot. Whether these rumors are true or not, judging by previous year and its sister festival in Beijing (which we featured here), this is essential visiting for China’s countless jazz fans.
Open In Google Maps
Shanghai, China
Give us feedback
Give us feedback