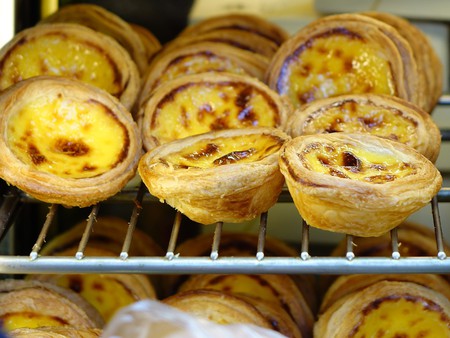 The two sides of Macau, luxurious gambler’s paradise and laid back colonial outpost, are reflected in these ten restaurants / Pixabay

Macau’s boom in casinos has transformed the city into China’s Las Vegas whilst also attracting numerous high-class restaurants that have joined the many rustic Portuguese haunts which are a legacy of colonial rule. The two sides of Macau, luxurious gambler’s paradise and laid back colonial outpost, are reflected in these ten restaurants, which are the best Macau has to offer.

Restaurant, French
Facebook
Email
Twitter
Pinterest
Copy link
Share
Located in the stunning Grand Lisboa hotel, which dominates the Macau skyline with its lotus-inspired design, Robuchon au Dôme is the most exclusive and refined of Macau’s many luxury restaurants. Robuchon au Dôme is the latest venture of star French chef Joël Robuchon, and maintains his reputation for innovative and culinary excellence, matching its predecessor with a three Michelin star rating. Executive Chef Julien Tongourian creates stunningly inventive creations such as Le Caviar; caviar jelly with cauliflower cream, Surprise; caviar in fine coral infusion with cream of peas, and crunchy;a cone stuffed with avocado salsa and lime zest, all of which are complemented by the panoramic views over Macau offered by the restaurant’s 43rd floor vantage point.

Located at The Venetian Macao, Portofino is one of the Macau’s top Italian restaurants, and has developed a reputation as one of the best new restaurants in the city. Its contemporary take on Italian classics has wowed diners with dishes such as Pestcatore ‘Ligurian Style’, mussels, clams, prawn and calamari in spicy tomato sauce with linguine; and Fiorentina Tagliata al Chianti, marinated T-bone steak with Chianti wine; being particular highlights. The interiors offer a slice of Little Italy, whilst the restaurant also caters for al fresco dining on its stunning outdoor terrace. Portofino was named as one of Tatler’s Top Restaurants in 2013.

Awarded its first Michelin star in 2012, The Tasting Room is a gastronomic laboratory run by Chef Guillaume Galliot. His incredible creations fuel the restaurant’s revolving menu, which takes inspiration from culinary traditions from all over the world to produce contemporary regional French cuisine. Dishes such as poached lobster with red wine sauce, sweet carrots, heirloom beets and roasted French quail with celeriac mash, medjool date sauce, zucchini tagliatelle are highlights of the two degustation menus. The restaurant also offers an eight-course Chef’s menu, which uses the best ingredients of the day to allow Guillaume Galliot to work his culinary magic.

Another Michelin-starred restaurant, Tim’s Kitchen is one of the best places to go for Cantonese food, and the restaurant rivals some of Macau’s neighbor Hong Kong’s most famous Canto eateries, including the original branch of Tim’s. The food is typically bold and flavorsome, with an emphasis fresh ingredients and refinement of flavor over the minimalist portions which so often characterize Michelin starred restaurants. Classic, traditional dishes are given a fresh spin by director Chef Yau-Tim Lai. Signature dishes, such as crystal king prawn, braised whole fresh crab claw with winter melon and sautéed pork stomach with pickled vegetables and bamboo shoots, are cooked to perfection.

Restaurant, Chinese, 0
Facebook
Email
Twitter
Pinterest
Copy link
Share
With three Michelin stars, The 8 offers highly refined takes on Dim Sum and other Cantonese and Huaiyang cuisine, creating stunning new dishes as well as offering all the classics you would expect in a traditional Dim Sum restaurant. The intimate, elegant atmosphere is ideal for the communal eating which is so typical of Cantonese food, and the incredible range of 40 types of Dim Sum means that even experienced diners will find something new to enjoy.

Cutting-edge design combines with avant-garde gastronomy in the Mandarin Oriental’s Il Vida Rica Restaurant. Offering expansive views over the South China Sea and Nam Van Lake, the restaurant’s ‘natural stone and sensuous lighting’ create an exhilarating atmosphere, which combines with the constantly surprising food to great effect. Dishes such as white onions from Cevennes and cheese, and Boston lobster and cauliflower, are unique experiments in culinary potential.

Vida Rica Restaurant at Mandarin Oriental is the right place to be if you’re looking for Cantonese cuisine where craftsmanship in flavour is always equal to the craft in creative presentation! Must Try: Dim Sum – The presentation of each dim sum dish is a testament to the culinary skills and dexterity of the chefs. Not only are these bite-sized snacks authentic, they come in innovation forms too. Our favourite? The bunny-shaped Har Gow! Find Vida Rica Restaurant at Mandarin Oriental Hotel, Avenida Dr Sun Yat Sen Nape.

Evidence of the profound impact the Portuguese had on Macau during their colonial rule of the region, Restaurante Fernando is one of the best of the many rustic, laid back Portuguese restaurants in the city. Located on Hac Sa beach, it is a trek from the central strip but the hearty, flavorsome food is well worth it. The mammoth portions and ready supply of Sangria also mean that is difficult not to enjoy Fernando’s take on classic Portuguese food. Dishes such as suckling pig, codfish salad, and roasted chicken and chips, or the excellent prawns in garlic are intensely tasty, and the extensive bar space means that the Fernando’s revelry often continues far into the night.

Traditional Portuguese cuisine in #Macau. Fernando's is one of the oldest, and perhaps the best, on the island. #AllRoadsLeadToChina

With branches throughout Macau, including at the Venetian hotel, Lord Stow’s Bakery is a Macau institution which has yielded many imitators throughout the region. Opened by Englishman Lord Stow in the late 1980s, the bakery specializes in Portuguese ‘Pasteis de Nata’, egg tarts using a recipe Stow picked up in Lisbon and modified with a few English touches. These egg tarts are now a symbol of Macau and the original Lord Stow’s Bakery is a tourist attraction in its own right. Egg tart shops now line the streets in Macau, but Lord Stow’s remains the best.

A hearty and traditional Macanese restaurant, Antonio’s is an unmissable part of any trip to Macau. Its rustic and charming atmosphere fuses with the extremely high-quality culinary offering, which garnered it a Michelin star in 2012. Signature dishes such as goat’s cheese gratin with olive oil and honey served on toast, are Portuguese with a Macanese touch, while its charcoal grilled sardines with boiled potatoes and green bell pepper salad shows off the Portuguese talent for seafood to perfection.

A unique experiment offering high-class gastronomy in an educational environment, the IFT Educational Restaurant is a training unit for the hotel and culinary students of the Institute for Tourism Studies. It nevertheless functions as a first class restaurant. The students do not run the kitchen but assist with preparation and service, and the emphasis on high standards is evident throughout. The restaurant features an international menu with Macanese touches, while on Fridays it offers a Portuguese and Macanese buffet dinner. It also supports organic agriculture in their sourcing of ingredients, many of which are grown on site. The restaurant is the perfect place to see Macau’s next generation of hoteliers in action and to experience their precocious abilities.