China‘s Jiangsu Province is renowned for its beautiful and historical towns that lie in the Yangtze River Delta, made up of an interlinking and crisscrossing of canals, rivers and lakes. Suzhou is the name that immediately comes to mind when thinking about Chinese water towns, but did you know that Jiangsu is brimming with smaller, less touristy options? 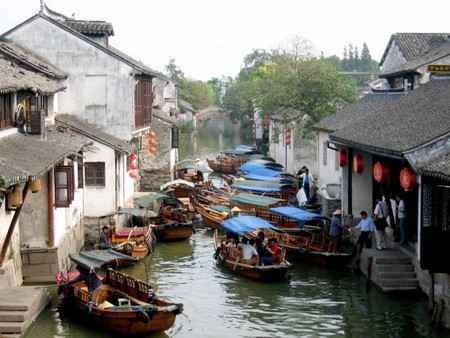 Located on the southern shore of beautiful Lake Baixian lies Zhouzhuang. This bustling water town has been an important landmark since the 12th century, as its connection with the Grand Canal provided an important link between the town and industrial settlements. A place which has a magnetic effect on writers, poets and artists due to the perfect preservation of the ancient Wu culture, Zhouzhuang is renowned for charming architecture and folk customs. The ancient Milou and Quanfu Temples lie inside the scenic Nanhu Gardens, which is surrounded by a working moat.

Zhouzhuang is one of the few places in the world where local fishermen still practice bird fishing. Cormorants are trained to work in tandem with the fishermen to catch especially large fish such as hairtails, a spectacle that’s been documented by National Geographic Television. Seeing is believing, however, and special tours are available to witness this marvel in person.

This water town also has a thriving festival culture, which includes the popular Fast Boat Race, held annually to celebrate the harvest and marriages of late autumn. Each locally constructed boat has a 15 man team, and attracts large crowds year after year.

Additionally, the rarer spectacle of the Lantern Rowing Ceremony is held every three to five years. Boats of varying sizes and shapes bedecked with colored lanterns perform a musically choreographed routine of movements and formations. Some of these formations are intended to make the boats resemble snakes or dragons. And the reflection of the lanterns on the water is said to look magical. 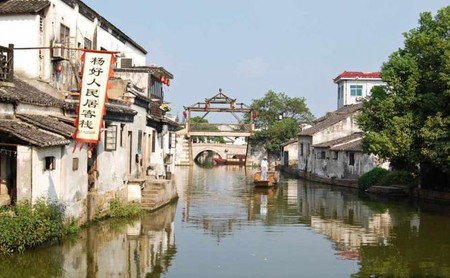 Surrounded by the five lakes of Jiuli, Nanxing, Pangshan, Yeze and Tongli, the water town of Tongli is a sprawling network of canals and rivers. Like Zhouzhuang’s, Tongli’s fishermen are also known for using cormorants to fish. Affectionately known by locals as the Little Venice of the East, Tongli is best seen from the water and renting a gondola is the perfect way to do that.

Tongli is a collection of many islands which are connected by over 40 stone arch bridges. The three most famous of these are Taipeng Bridge (Peace), Jili Bridge (Luck) and Changqing Bridge (Glory). Crossing these three bridges one after the other is believed to bring an individual good fortune, and protect against disaster and misery. Every day, a special ceremony is performed in which a visitor dressed in red, the color of happiness and prosperity in China, is carried across these three bridges in a chair for good luck.

Tongli is renowned for its liberal and progressive attitudes, and its must-see sites, including the Retreat and Reflection Garden and the Blue Emerald and Green Jade Halls. 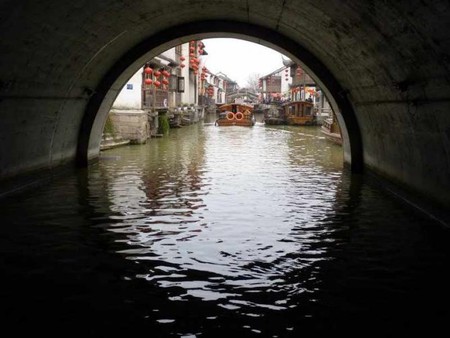 Perhaps the most remarkable of Jiangsu’s water towns, Luzhi dates back to the Liang Dynasty (CE 502-556) when it was known as Puli. This is often referred to as the mother of all water towns as it was the first to exist in China.

Luzhi is tiny compared to other canal towns, with a less developed tourism industry. However, Luzhi has retained much of its unique cultural practices and features which otherwise might have been marred by tourism, such as the traditional eye-catching blue cotton dress worn by local women. In its heyday, this UNESCO World Heritage Site had more bridges than Venice. Now Luzhi is more like a living museum, with well-preserved ancient plazas, bridges and streets, few tourists, and life very much the same as it has always been. 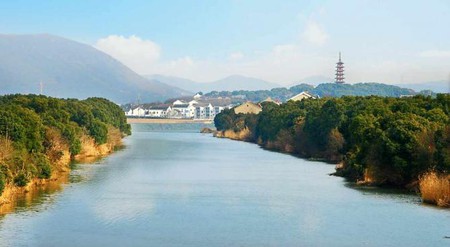 This 2,500-year-old town on the bank of Lake Tai and at the foot of the Dengwai Mountain is home to the impressive Bronze Guanyin Temple. It is said that in 1040 AD a local farmer was digging in the town and unearthed a bronze statue of Guanyin, the Goddess of Mercy. This statue is now on display in the temple and is the reason for its name. Guangfu is famous for being home to fine makers of Suzhou silk, distinctive for its unique patterns, delicate embroidery and vibrant colors. Additionally, more than 20 types of bamboo trees can be found in Guangfu’s famous stone and bamboo gardens, along with rare fossils and examples of the ancient art of olive stone carving. During late winter and early spring the plum trees which cover the slopes of the Dengwai mountain and large areas of the town blossom, covering the place in a sea of purple and white flowers. 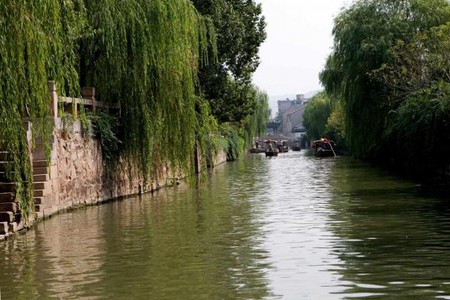 Rich in natural resources, Mudu lies to the West of Suzhou and is famous for its working Buddhist temple, the Mingyue Temple, which has had to be largely reconstructed since the Cultural Revolution to its 10th century glory. Located in the Tai Hu scenic area of the city, once a quiet maritime village, Mudu has since been swallowed by urban sprawl and is now the most bustling trading port of Suzhou. Like most water towns, Mudu boasts some impressive landscape gardens, such as Yan’s Garden. Mudu is set apart from other similar settlements by its impressive Lingyan Mountain, which at 182 meters tall looks like an elephant from a distance.