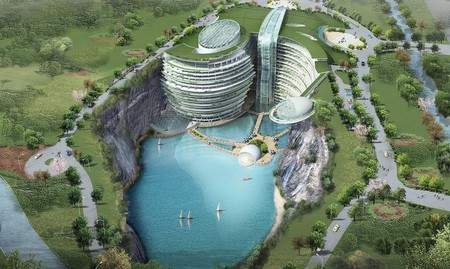 Most hotels boast about offering great views from penthouse suites in some of the tallest buildings in the world. However, for the first time ever, a Chinese five-star hotel is being built inside a quarry 100 metres BENEATH ground level. Two floors will even be underwater.

After ten years of construction work, the Shimao Wonderland Intercontinental Hotel in Shanghai is nearing completion and is set to open in 2018.

In a world first, the luxury five-star hotel in the town of Songjiang, approximately 35 km from the city of Shanghai, has been built into the side of a disused, 90-metre-deep, water-filled quarry that is the size of five football fields. With 16 of its 18 floors underground, it has been called a wonder of modern engineering. 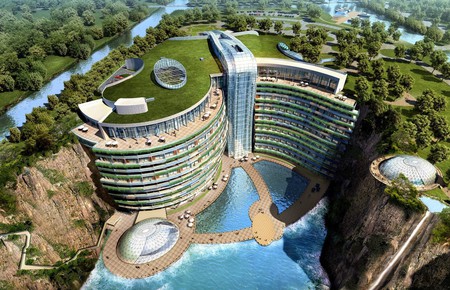 The hotel has been designed by British firm Atkins, the engineering and architectural consultancy behind the Burj Al Arab Hotel in Dubai.

Work started in 2006, and total costs are expected to exceed US$151 million by the time the hotel interiors have been fitted out.

Shanghai Shimao Group has invested in and developed the structure, while hospitality group InterContinental will manage the completed property.

Chief engineer Chen Xiaxiang said that while normal projects use tried and tested technology to transport materials upward, this undertaking has required novel solutions to achieve the opposite.

‘It’s been a fight against gravity’, he said.

The ‘fight’ has mustered more than 5,000 architects, engineers, designers and workers, from initial design in 2006 to interior decoration today. 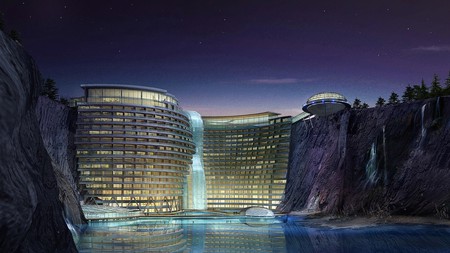 Upon completion, the futuristic hotel will feature 383 bedrooms, underwater public areas, guest rooms and conference facilities for up to 1,000 people, and also include sport and leisure centres.

The hotel’s roof will be at ground level. For this reason, it will be an eco-friendly green roof that fits seamlessly into the surrounding environment with various trees planted on top. It will become a ‘natural’ part of the local topography. 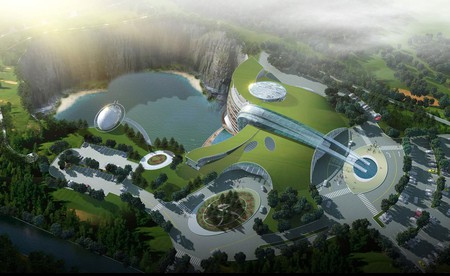 Two underwater levels will house a restaurant and guestrooms facing a ten-metre-deep aquarium. The lowest level of the hotel will contain a leisure complex with a swimming pool and water-based sports.

An extreme sports centre for activities such as rock climbing and bungee jumping will be cantilevered over the quarry and accessed by special lifts from the water level of the hotel. Also, a transparent glass ‘waterfall’ located in the centre of the building is a major architectural feature.

By building the hotel where it is, designers and developers hope to prevent further damage to the ecological environment around it. The Shimao Wonderland Intercontinental Hotel may become just about the greenest hotel ever made.