How Locals Reacted to Death of Russian Model Vlada Dzyuba, 14, in China 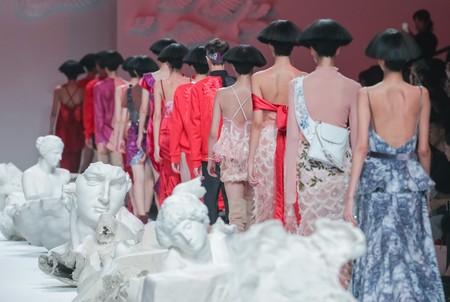 On October 27, 14-year-old model Vlada Dzyuba died at the Ruijin Hospital in Shanghai, shortly after participating in Shanghai Fashion Week. In China on a three-month-long contract with the Esee Modeling agency, her death has sparked renewed controversy over modeling contracts and the working conditions for models in China.

Much of the uproar has stemmed from the swirl of confusion surrounding this case, leading to unchecked speculation and virulent debate on social media in both Russia and China.

It started with unverified information from the Siberian Times , which accused Dzyuba’s untimely demise on meningitis exacerbated by extreme overwork. This soon led to headlines screaming that Dzyuba was “worked to death,” and bringing attention to the fact that, after travel, food, and hotel fees, she was only making a reported $8 a day.

Vlada Dzyuba, 14 year-old Russian model collapsed after working herself to death during a three-month assignment in China….The industry have to pay much more attention to working conditions for young models and the way they are harshly exploited. #modellife #modelsrights #modelsmatter #awarness #vladadzyuba

The Global Times (a Chinese government mouthpiece publication) quickly ran a rebuttal piece quoting Esee’s chief executive, Zheng Yi, as saying Dzyuba’s unfortunate death was due to septicopyemia (a type of blood poisoning) and nothing to do with her work – that, in fact, she worked a legal eight hours a day or less. The New York Times reported that Russian authorities “announced they would be conducting a criminal investigation into whether Vlada Dzyuba’s death was caused by neglect.”

On Chinese social media site Weibo, Esee announced the death of Dzyuba and hoped that she would rest in peace, but also defended itself again against allegations of overwork. Chinese netizens responded with an outpouring of sympathy. In addition to general compassion for Dzyuba’s early passing, there was a general consensus that foreign media is unnaturally eager to jump on anything negative about China without understanding the culture or knowing the facts. As many users noted, 13 hours is a common workday for many. As Weibo user synqqt said, “This is the Chinese work schedule, we work a lot more overtime than foreigners do.”

However, there was one overarching question that users had: why was a 14-year-old sent alone to a foreign country to work instead of attending classes and finishing school, and why did she get a visa?

Russian media and social media users seem to have the same question. It was reported that Dzyuba had no medical insurance while working in China, which could have led to a reluctance in seeking immediate medical help. The girl’s mother did not even have an international passport, and had a difficult time getting to China to see her daughter’s body. According to Esse’s Public Relations Director, Michelle Chien, modeling is viewed as cultural work in the country and, therefore, “[The] laws in China have no direct regulations, [so] it’s OK to recruit minors.” However, in an announcement later on Chinese social media site Weibo, Esee announced they would no longer use models under the age of 16.

😭😭💕❤️ Vlada Dzyuba #SAD: 14 year old #model slumps and dies on #catwalk following severe exhaustion . . . A 14-year-old model who collapsed and died moments before she was due on the catwalk was suffering from "utter exhaustion", doctors have said. . . #VladaDzyuba, from #Russia, was on a three-month assignment in China after being recruited by an agency.According to reports she was on a "slave labour" contract without medical insurance.She had been taking part in a gruelling 13-hour #Asian #fashion show in #Shanghai when she collapsed and fell into a coma. . . She never regained consciousness, dying two days later, say reports.A preliminary post-mortem exam concluded the cause of death was meningitis made worse by "utter exhaustion". . . #Moscow is to demand explanations over the conditions in which the Vlada was kept in Shanghai after she was recruited on a contract which involved her missing #school in her home city Perm, in the Urals. . . She had been prominent at this month's prestigious Shanghai Fashion Week.The girl's temperature soared as she was about the go on the catwalk, it has emerged. "Minutes later she collapsed and was unconscious," reported The #Siberian Times." . . An ambulance was called but she died on Friday after two days in a coma."The preliminary cause of death is meningitis compounded by severe exhaustion." Her distraught #mother Oksana wept: "She was calling me, saying 'Mama, I am so tired. I so much want to sleep'. "It must have been the very beginning of the illness. . . "And then her temperature shot up."I didn't sleep myself and was calling her constantly, begging her to go to hospital." . . The mother – who also has a young baby – sought a visa to be with her daughter but could not get it before her child died. . . The head of the Perm modelling agency behind her trip, Elvira Zaitseva, said: "No-one expected it to lead to such consequences."We are now reaping what we have sown." The Siberian Times #model#modeling#sad#died#russianmodel#teenmodel#crying

At the moment, it remains clear that China is a major draw for many models getting their start. The country is hungry for fashion, and foreign models can add the international air that many domestic brands seek. However, rules and regulations protecting these young hopefuls are not yet standardized, and don’t always protect the underaged and vulnerable, many of whom are abroad for the first time.

These difficulties have been reported again and again, but the market demand continues to see models flocking to the country. In an interview with BBC Russia, one model, Natalia (name changed), said she worked in China for two years, often for several weeks without a day off on grueling photo shoots that lasted 13 hours at a time. “All models know that modeling in China is tough. But this is where the money is. That’s why model from all over the world flock there,” she said. “They prefer China, even with its inhuman working conditions, to Paris and Milan – as long as they get paid.”