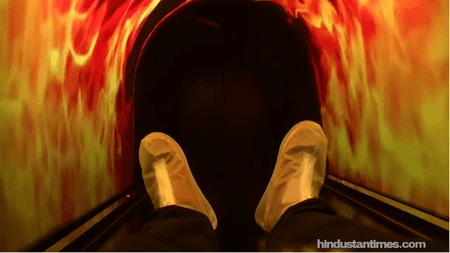 Death, cremation, and rebirth. A new attraction in Shanghai allows participants to experience all of these sensations in a simulation introduced by a hospice organization. The intention of the experience is not only to quench a morbid fascination some have with death but to hopefully alter the outlook of the participants.

The Xinglai death simulator, colloquially called ‘The Cremator,’ was created by Huang Weiping and Ding Rui of Hand in Hand hospice, in an effort to demystify death and prepare people for the moments leading up to it. With a purpose of encouraging participants to conquer the fear of death, the simulator is reminiscent of South Korea’s Funerals for the Living, and drew a lot of attention when it opened. Reportedly, the small space can house 12 participants at a time and had 40 bookings on its opening day.

The Xinglai museum, which translates to “awaken” in English, was developed by Weiping and Rui after founding a hospice for cancer patients. The two developed a similar simulation experience in 2014 at the Window of the World theme park in Shenzhen, China.

Weiping and Rui did their research before creating the escape room-like attractions. The two visited a crematorium and asked to be placed in a deactivated furnace to further understand the experience.

Participants begin their experience of the 4D death simulator with a game that challenges them to consider important questions about life and death. They are told to choose between themselves and someone else being sacrificed and to justify their reasoning. The person deemed to have the worst answer is the one who gets to experience the mock death. They lie down on a conveyer belt that leads into a furnace-like chamber. Heated to 104 degrees Fahrenheit, the chamber blows out hot air and has flames projected on the walls.

The simulation ends as participants are led into a second, white chamber, which they enter through a latex “womb” to represent rebirth. Guests are encouraged to make a note of any final thoughts and wishes and can either share these reflections on the spot or keep them as a souvenir of the simulation.