China’s race toward modernization has contributed to the creation of two types of ghost towns and villages. There are newly-built cities which, in the Western media, have become the epitome of China’s wasteful construction push. And there are centuries-old villages which have fallen victims to rural exodus.

Ironically, the growth of domestic tourism is coupled with a growing interest in old towns and ancient streets. While many old towns like Fenghuang in Hunan province, the walled city of Dali or Lijiang in Yunnan, Pingyao in Shanxi or the water-towns of Jiangsu have become part of a canon of must-see destinations in China, others are in dire state of abandonment, in spite of their cultural and historical value. There are three provinces of particular interest in this respect: Guangdong, the economic powerhouse of the country, Hunan, the home province of Mao the great helmsman and Guangxi, a province known for the picturesque landscapes of the Li River. 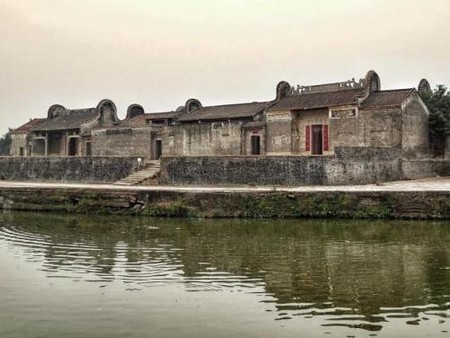 Daqitou | The Village of General Zheng

Right in the middle of two of Guangdong’s province largest cities, Guangzhou and Foshan, the village of Daqitou is set in a classic chessboard-like layout. Behind the ancestral halls, which dominate a geomantic pond, the narrow slab-stone streets are empty. The habitations are in such a dire state of disrepair that a visit to Daqitou becomes a creepy experience.

Only a few enthusiasts of south China’s Lingnan architecture, characterized by the ear-shaped roofs and the delicately sculpted miniature scenes on the lineage temple’s walls, venture into this historical village built by a general of the Qing navy, Zheng Shaozhong, at the end of the 19th century after he had left the imperial court to mourn the passing of his mother in his native Guangdong province. The legend also says that Emperor Dowager Cixi gave general Zheng a lump sum of money he used to build this village.

There is a new Daqitou adjacent to the old one. With the improvement of quality of life, they have built for themselves new concrete and brick houses with all the comfort of modern life. 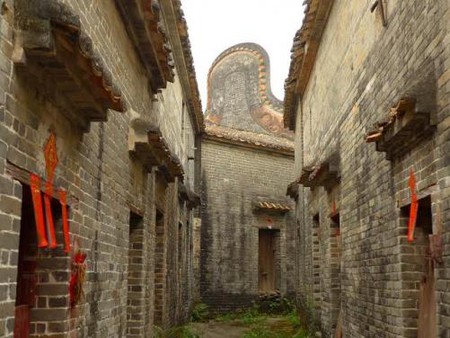 Inside the deserted village of Licha | © Gaetan Reuse

Located near the city of Zhaoqing, home to Matteo Ricci – an Italian Jesuit considered as the father of Sinology – between 1582 and 1589, Licha was founded during the reign of emperor Jiading (1208-1224) of the Song Dynasty. Most of the inhabitants have either migrated to nearby towns and cities, and many of them went as far as Australia. Only a few elderly people still live in the village. They take care of the lineage temples where they go and burn incense and explode firecrackers with the money sent by the migrants away from home. Even though it is void of life, travelers do come to explore this village. Surrounded by a round wall pierced with gates, the layout of Licha was inspired by the Yin and Yang symbol. This is why it was also named the ‘bagua village’, the ‘village of the eight trigrams’. This reminds us that, in ancient China, complex philosophies like Taoism contributed to urban planning. 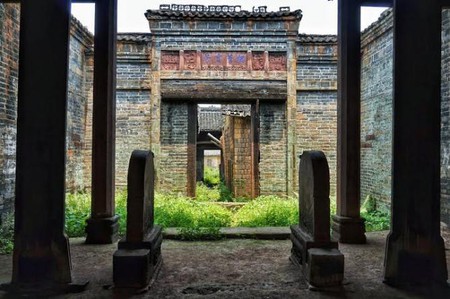 Dajiangpu | Lineage Temples and the Ghost Hand of Mao

What remains of Dajiangpu is an impressive series of five lineage temples, which are slowly crumbling away in this Cantonese countryside, northeast of Guangzhou in the urban district of Conghua. There is definite majesty that emanates from their eerie look. Electric poles planted in front of each temple, tell us that the villagers have built for themselves new houses nearby and that they probably forgot about the past. Inside the lineage temples built for ancestral worship, nature is growing and claiming back its rights. We find, on the walls of Dajiangpu’s lineage temples, the ghost hand of Mao. Slogans dating back to the Cultural Revolution (1966-1976), a period during which lighting sticks of incense to honour the family ancestors was considered a political heresy, claim in faded red paint: ‘Mao Zedong’s thought is a weapon that will transform our thinking and guide us on the right path!’ and ‘Mao Zedong’s thought is the mighty red banner under which we advance with determination!’. 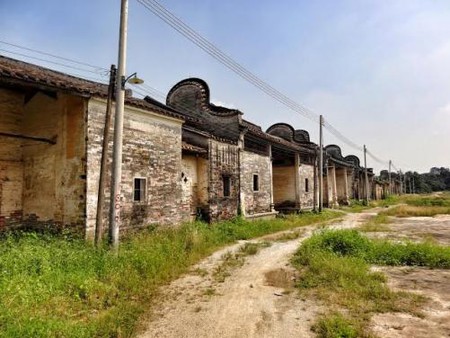 Yuxian | A Village in Ruins

This village of northeast Guangdong, a 45-minute drive from Nanxiong, was originally founded during the Song dynasty, nearly 1,000 years ago when an imperial official named Wang Dexian, on his way back from Guangzhou to the capital was attracted by the beauty of the landscape and settled in the area. In 2008, Yuxian was listed as one of ‘China’s historical villages’ worthy of protection by national and provincial authorities. A Buddhist monk has renovated the Hualin temple, however the two lineage temples, which are decorated with patterns, designs and meticulously carved bas-relief that are rarely seen elsewhere, are in ruins. Most villagers have gone to the cities in search of a better life. They have left behind their elderly parents and with them, young children who do not have the physical strength to maintain the village. 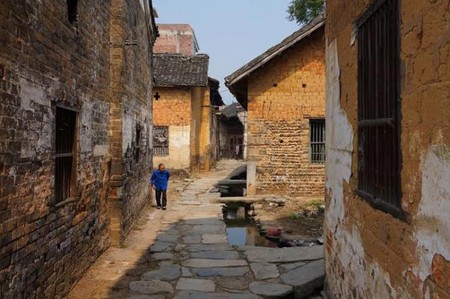 Officially founded in 1404 during the reign of emperor Yongle of the Ming dynasty, the village of Zhongtian was enlarged during the Qing dynasty. It counted approximately 100 houses made of stone and wood, 100 lanes and 200 wells.Much like Banliang, Zhongtian is praised as one of the largest and best example of Ming-Qing era village still standing in south Hunan province. Comparable to Banliang in style, Zhongtian is much smaller. The narrow slab-stone streets of both villages are desperately desert, except for a few elderly people. A new village of bricks and concrete was built on the other side of the geomantic pond.Although all the houses were abandoned, we find in most of them a small altar with incense sticks still burning in front of the framed portrait of deceased family members. Those who have moved to the new village, still come to honor their ancestors in their old house. 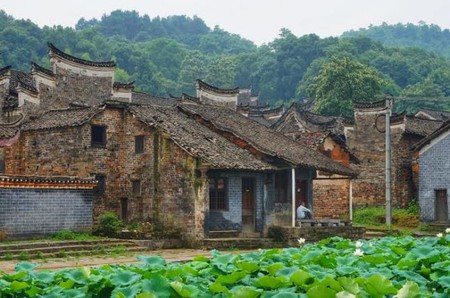 Officially founded during the early years of the Ming dynasty (1368 – 1644), most of the 300 houses of Banliang were actually built during the Qing dynasty (1644 – 1911). In front of this large village of southern Hunan province, we find three half-moon shaped geomantic ponds, which are matched by three hills. Another clue that, in ancient China, the rule of fenghsui or geomancy applies in urban planning.Most of the houses have been meticulously surveyed: a small metal plate nailed to the wood frame of the gate gives information such as the era when it was build (Ming or Qing dynasty), the area, the main construction materials used or the name of the owners. All the buildings are deemed historical heritage. While some are well preserved, some of them are just ruins.Located just 45-minute north of Chenzhou, Banliang has lost more than half of its inhabitants who have preferred to tempt and improve their way of life by moving out to the city. Ironically, high-speed trains dash between Guangzhou and Beijing on the elevated concrete pillars erected near the village. Their roaring sound fills the village for a few seconds and quickly fades away, like Banliang. 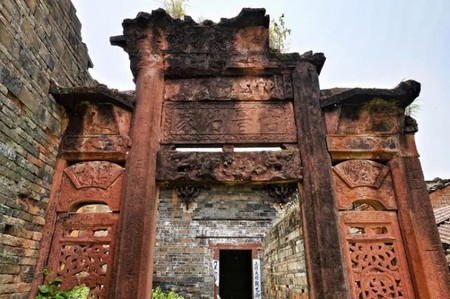 The name of this village literally means ‘the garden of the Qin family clan’. According to the legend, the village was founded by Qin Shubao, the general of the Tang dynasty, which history has transformed into one of the door gods seen everywhere in China. Originally, Qinshiyuan was a compound of several walled courtyards in which there were several dozens of houses. Today, only one courtyard is left intact. All the others have been destroyed by their owners who decided to build modern houses made of concrete instead.The oldest house of the courtyard was built in 1381, others were built during the Ming and Qing dynasties. The imposing gates are topped with a four – Chinese character sentence written in seal script, one of the five calligraphic styles, which travelers rarely see these days.Located in northeast Guangxi province, the only feature of the village that will not change is the landscape of karst peaks, which made the region famous to foreign travelers.