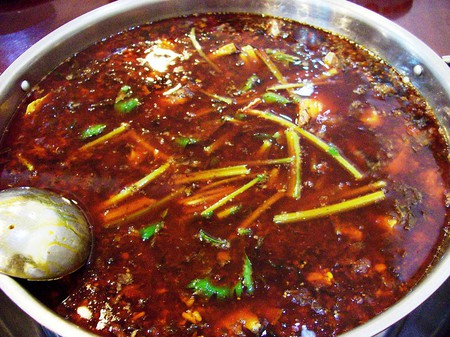 A restaurant in Chongqing, China is making rounds on the Internet thanks to its recently launched dish, a Hello Kitty-themed spicy hot pot. Pictures shared on social media show the famous cartoon character swimming face-up in a crimson soup, with some Chinese netizens pointing out that the rather terrifying images seem to evoke Hello Kitty melting into an inferno.

Pu Jin Lao Hot Pot (普金老火鍋) is located in the Nan’an district of Chongqing, the birthplace of a type of spicy hotpot known as mala hotpot. This well-known dish consists of a simmering red broth made from scallions, chilis, star anise and, most famously, Sichuan peppercorns, which are known for their numbing effect on the tongue.

The restaurant’s new dish makes use of a Hello Kitty-shaped figure molded from dried soup base ingredients. The pot is first brought to the table with the Hello Kitty intact, and some time is given for admiring diners to snap photos. Next, a server pours boiling water into the pot, causing the Hello Kitty to melt into a spicy broth. The result is arguably more hellish than cute.

The restaurant is owned by two brothers who wanted to do something to make their hot pot eatery stand out. Each Hello Kitty figure takes 12 hours to make, so advance reservations are recommended.

Cartoon-themed restaurants are extremely popular in mainland China, Taiwan, Hong Kong and Japan, often drawing hordes of customers with their camera phones at the ready.

But Pu Jin Lao Hot Pot isn’t drawing the same kind of universal adoration. While some netizens have praised the restaurant’s creativity, others are calling it a ‘cruel,’ ‘frightening’ or ‘bloody’ sight on Chongqing Today’s Weibo post.

Opinions may be divided, but one thing’s for sure: this gutsy restaurant is winning the publicity game.