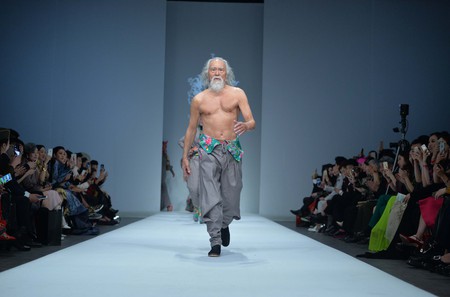 At Chinese Fashion Week in 2015, 80-year-old Wang Deshun — walking the runway shirtless, defined pectoral muscles on full show — earned the moniker “China’s hottest grandpa”. This week the actor / model revealed the fitness regimen responsible for giving him the physique of a man half his age.

As we age most of us lose muscle and gain fat. It’s also easier to get injured, as our bodies take longer to repair and recover. Yet somehow Wang Deshun has maintained musculature and a spritely disposition that belie his biological age.

The surprising news is that China’s hottest grandpa was fairly late to the healthy lifestyle game — joining his first gym at around 50 years of age. Since then, though, he’s doubled down on his commitment to fitness, clocking up four hours of exercise most days.

He favors a weight lifting / cardio / stretching combo that GQ correspondent Michael Paterniti describes as “a self-tabulated Tai Chi” and “Kama Sutra with dumbbells” — a regimen he credits with keeping him strong, lean and limber into his golden years.

You might expect Deshun to subscribe to a low-carb, high-protein diet, but he claims to eat whatever he fancies, whenever he fancies it. Paterniti observes him devour “eggs, turkey, pancakes, cheese, mushrooms, pears, pastry, juice, macchiato, and green Jell-O cubes” at a breakfast buffet, which is necessary fuel when you’re working out for four hours a day.